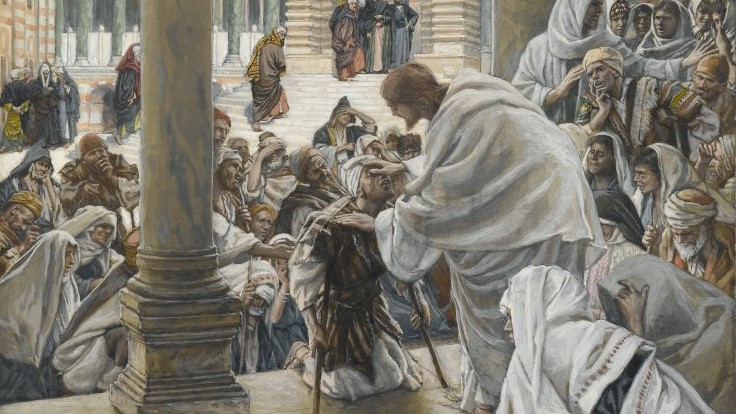 He Heals the Lame by James Tissot. Source: Wikimedia Commons
Last week we began a reflection on the Church's teaching that we must have a preferential option for the poor, and we looked at how this teaching is rooted in Scripture. I mentioned that when looking at Catholic teaching on the poor and poverty, we need not look further than the Catechism where it says, “…those who are oppressed by poverty are the object of a preferential love on the part of the Church which, since her origin and in spite of the failings of many of her members, has not ceased to work for their relief, defence, and liberation through numerous works of charity which remain indispensable always and everywhere” (CCC 2448).

The Catholic Church has developed quite a sophisticated social doctrine based on these principles.

There have been many encyclicals, letters, discourses, addresses, exhortations, and council and synodal documents that outline these principles. The Church teaches that everyone has the right and use of private property. This was clearly outlined in Leo XIII’s encyclical Rerum Novarum (see RN 8). Furthermore, everyone has the right to a just wage (see RN 5 and 20). Pope Pius XI, on the 40th anniversary of Rerum Novarum, wrote the encyclical Quadragesimo Anno. In it he writes about the demands of the common good. He says, for example that the wage-scale must be regulated with a view to the economic welfare of the whole people (see QA 71 and 72). In Mater et Magistra John XXIII considers the issue of shared responsibility: "[We are] convinced that employees are justified in wishing to participate in the activity of the industrial concern for which they work" (91). The Second Vatican Council document Gaudium Et Spes also speaks about people’s right to work and fair wages (66). It speaks about people’s right to form labour unions (#68). But all these are rooted in the Biblical teachings: "The Fathers and Doctors of the Church held this opinion, teaching that men are obliged to come to the relief of the poor and to do so not merely out of their superfluous goods" (GS 69). Pope Paul VI also refers to this important tenet of our Faith in his apostolic letter Octogesima Adveniens: “In teaching us charity, the Gospel instructs us in the preferential respect for the poor and the special situation they have in society” (OA 23).

The Church teaches the principles of solidarity and subsidiarity and the preferential option for the poor.

Pope John Paul II reminded us of all these on the 100th anniversary of Rerum Novarum. In this encyclical, he wrote: “It will be necessary above all to abandon a mentality in which the poor—as individuals and as people—are considered a burden, as irksome intruders trying to consume what others have produced. ... The advancement of the poor constitutes a great opportunity for the moral, cultural and even economic growth of all humanity” (Centesimus Annus 28). Pope Benedict XVI, in Deus Caritas Est, wrote that “love for widows and orphans, prisoners, and the sick and needy of every kind, is as essential to her as the ministry of the sacraments and preaching of the Gospel” (22). Lastly, Pope Francis, in his encyclical on the Care for Our Common Home, Laudato Si' speaks about the poor. Among many topics  a quick search shows some 70 references to the poor or to poverty), he writes about the quality of water available to the poor (29), about global inequality (48-52), about foreign debt (52), about how globalization affects the poor (109), and lack of housing (152). He writes:

"In the present condition of global society, where injustices abound and growing numbers of people are deprived of basic human rights and considered expendable, the principle of the common good immediately becomes, logically and inevitably, a summons to solidarity and a preferential option for the poorest of our brothers and sisters." (152)

This preferential option for the poor and vulnerable includes all who are marginalized: unborn children, persons with disabilities, the elderly and terminally ill, and victims of injustice and oppression. If anything, no one can accuse the Church of lacking a social teaching with regards to the poor and aiming to prevent the marginalisation and victimization of the poor and the most vulnerable. Perhaps the Letter of James expresses the Catholic teaching with regards to the poor best: James says that to be religious means that we must visit the widow and orphan in their need. “Religion that is pure and undefiled before God, the Father, is this: to care for orphans and widows in their distress, and to keep oneself unstained by the world” (James 1:27). The widows and the orphans were the poorest of the poor in those days. James tells us that we must visit. It is not about providing services or even charity – this is about family, about relationships, about inclusiveness. It’s not an appointment with a social worker. James says: “keep unstained by the world.” Perhaps this means that we will see the poor with different eyes than the world sees them. Come back next week and we'll look at the moral and ethical implications of this teaching.