Deacon-structing the Preferential Option for the Poor – Part 1 | Scripture 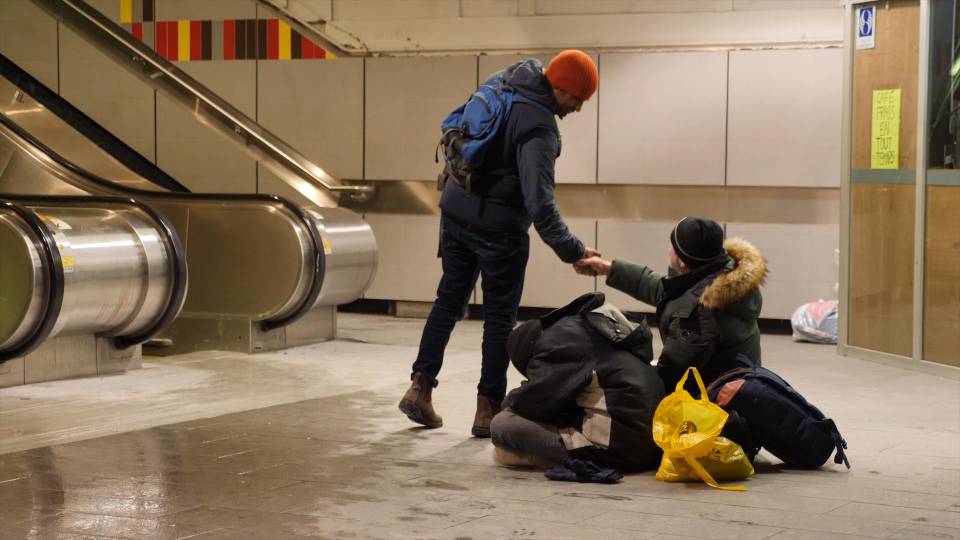 Reaching out to the poor in our own cities - from the S+L original documentary, Dealer of Hope (click here to watch)
Recently, Fr. Richard Ho Lung, founder of the Missionaries of the Poor in Jamaica came to visit us at Salt + Light. If you don’t know about the Missionaries of the Poor or about Fr. Richard Ho Lung, I encourage you to watch the interview I did with him for Perspectives Weekly. (You can also watch an interview for the same program I did with Sr. Joanne Belmonte and Sr. Ashley Spalding of the female branch of the Missionaries of the Poor.) I have known Fr. Ho Lung since 2001 when we were planning for Word Youth Day 2002. He is a caring and wise man. I remember clearly when we did the interview for Perspectives Weekly. One of the questions I asked him was about the Church needing to be poor. I understand why we need to care for the poor. I understand why we have a “preferential option for the poor”, but does that mean that we ourselves need to be poor? He said, “Absolutely!” It’s not enough just to care for the poor; we have to be a poor Church for the poor. (Read more about this in Deacon-structing The Cry of the Poor, part 1 and part 2.) This is why when Pope Francis was elected, his Brazilian friend, Cardinal Claudio Hummes, leaned over and asked him to “remember the poor”.  That is why the Holy Father chose the name “Francis” and why he has put those in the peripheries at the centre of his papacy.

But the Church has always put the poor at the centre.

In the chapter dedicated to the Seventh Commandment , the Catechism of the Catholic Church (#2448) says:

"In its various forms - material deprivation, unjust oppression, physical and psychological illness and death - human misery is the obvious sign of the inherited condition of frailty and need for salvation in which man finds himself as a consequence of original sin. This misery elicited the compassion of Christ the Savior, who willingly took it upon himself and identified himself with the least of his brethren. Hence, those who are oppressed by poverty are the object of a preferential love on the part of the Church which, since her origin and in spite of the failings of many of her members, has not ceased to work for their relief, defense, and liberation through numerous works of charity which remain indispensable always and everywhere" (Libertatis Conscientia, 68).

As we settle into the summer months – when we are most likely to be thinking about the dock and a cool beverage, I’d like to dedicate the next couple of weeks to this very topic: the Church’s preferential option for the poor.

Let’s begin with the Bible.

Quite often the attitude that many people have is that poverty is the fault of the poor: They are victims of their own choices. On the other hand, most passages in the Bible that refer to the poor say that the reasons people are poor are beyond their control. For example, the Book of Proverbs has about 12 verses that talk about personal responsibility resulting in poverty (see, for example, Proverbs 28:19). The rest of the 50 or so Proverbs that deal with poverty are all about how poverty is beyond the control of the poor (see, for example, Proverbs 6:11). The poor are poor because they are oppressed or victimised, because they are sick or broken, or dispossessed. There are some 400 passages in Scripture that refer to poverty or the poor, and about 2000 individual verses speak about poverty. This is the issue most spoken about in the Bible after idolatry. This means that poverty is the second issue closest to God’s heart. Because the poor are victims of their circumstances, in the Bible many different terms can refer to the “poor”. This is also because in Scripture poverty is not an economic term. It does not only refer to people who don’t have money. It refers to people who are needy, afflicted, and oppressed. The term in the Bible that comes closest to our economic notion of poverty is one that refers to people who have no food (in Hebrew: raed). Perhaps the most important concept concerning poverty found in Scripture has to do with how God feels about them. The Old Testament is full of references about a God who cares for (see Leviticus 23:22, for example), saves (see Job 5:15), remembers (see Psalm 9:18), and provides justice for the poor (see Psalm 72:1-2).  In the Letter of James we read that God has chosen the poor to be rich in faith and to be heirs to the kingdom (James 2:5).

God loves the poor and the needy.

Deuteronomy 15 offers a foundational teaching on poverty: It has to do with justice (15:1-18). If we follow all the commands, there will be no poor in the land. God says to the Israelites that they can build a nation where there is no poverty. That means that there is enough wealth in the world for everyone. But if they do not keep the law, the poor will be with them always (15:11). Therefore they must be taken care of. Deuteronomy 5:11 says that the response to the poor should be open-handedness. This is not just generosity but also embrace. In a land where we have poverty, we are called to be generous and inclusive. There is one other concept of poverty in Scripture that I’d like to share with you. In Judaism, all people have the same rights to come before God. The king, the peasant, the poor, the rich – all are the same before God. God makes both the poor and the rich. The rich and the poor have a common bond: God is the maker of them all (see Proverbs 22:2). The Book of Job tells us that God shows no partiality toward nobles (34:19). That equality of status with which God has created us should exist among us.  We are all equal in dignity before God. This does not mean same-ness. It has to do with fairness. There are some who have more wealth than others, but because we are equal before God, we must take care of those who have less than us. This is why James says to visit with widows and orphans (1:27): They are equal in dignity. Deuteronomy 15:7 says to be gracious to your poor:

“If there is among you anyone in need, a member of your community in any of your towns within the land that the LORD your God is giving you, do not be hard-hearted or tight-fisted towards your needy neighbour.”

They are ours – not “theirs” – they are our family. Come back next week and we’ll see what some Church documents have to say about the poor.