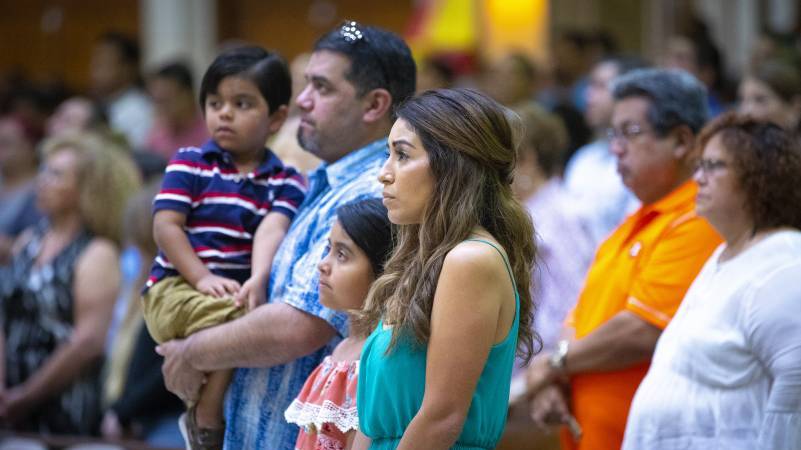 CNS photo/Chaz Muth
For the last 13 weeks we've been learning about the Mass so that we can participate more actively, deeply, and consciously. We started with the Entrance, the Penitential Rite and the Gloria. We then entered the Liturgy of the Word, which includes the Readings, the homily, the Creed, and the Prayers of the Faithful. The second part of the Mass is the Liturgy of the Eucharist, which includes the Eucharistic Prayer  (part 1 and part 2), and then we went into the Communion Rite. Last week we looked at the Concluding Rites.

I hope that this has helped you, even if a little bit, to participate at Mass more.

I can’t leave you without sharing one of the most awesome revelations about the Mass that I discovered. In fact, reading this changed my whole perspective about the Mass. We know that Jesus instituted the Eucharist (1 Cor 11; 23-26; Mark 14: 22-24; Matthew  26: 26-30;  Luke  22:14-23); we know that early Christians gathered on the “Lord’s Day” to celebrate what they called “the breaking of the bread” (see 1 Corinthians 11:17-34). But, how did we get from what St. Paul describes to the Corinthians, which sounds a little disorganized, to the fairly ordered ritual that we celebrate today?

The Celebration of the Eucharist No one may share the Eucharist with us unless he believes that what we teach is true, unless he is washed in the regenerating waters of baptism for the remission of his sins, and unless he lives in accordance with the principles given us by Christ. We do not consume the Eucharistic bread and wine as if it were ordinary food and drink, for we have been taught that as Jesus Christ our Saviour became a man of flesh and blood by the power of the Word of God, so also the food that our flesh and blood assimilates for its nourishment becomes the flesh and blood of the incarnate Jesus by the power of his own words contained in the prayer of thanksgiving. The apostles, in their recollections, which are called gospels, handed down to us what Jesus commanded them to do. They tell us that he took bread, gave thanks and said: Do this in memory of me. This is my body. In the same way he took the cup, he gave thanks and said: This is my blood. The Lord gave this command to them alone. Ever since then we have constantly reminded one another of these things. The rich among us help the poor and we are always united. For all that we receive we praise the Creator of the universe through his Son Jesus Christ and through the Holy Spirit. On Sunday we have a common assembly of all our members, whether they live in the city or the outlying districts. The recollections of the apostles or the writings of the prophets are read, as long as there is time. When the reader has finished, the president of the assembly speaks to us; he urges everyone to imitate the examples of virtue we have heard in the readings. Then we all stand up together and pray. On the conclusion of our prayer, bread and wine and water are brought forward. The president offers prayers and gives thanks to the best of his ability, and the people give assent by saying, “Amen.” The Eucharist is distributed, everyone present communicates, and the deacons take it to those who are absent. The wealthy, if they wish, may make a contribution, and they themselves decide the amount. The collection is placed in the custody of the president, who uses it to help the orphans and widows and all who for any reason are in distress, whether because they are sick, in prison, or away from home. In a word, he takes care of all who are in need. We hold our common assembly on Sunday because it is the first day of the week, the day on which God put darkness and chaos to flight and created the world, and because on that same day our Saviour Jesus Christ rose from the dead. For he was crucified on Friday and on Sunday he appeared to his apostles and disciples and taught them the things that we have passed on for your consideration. (Emphasis is my own.)

Doesn’t that sound very close to what we do at Mass on Sundays? 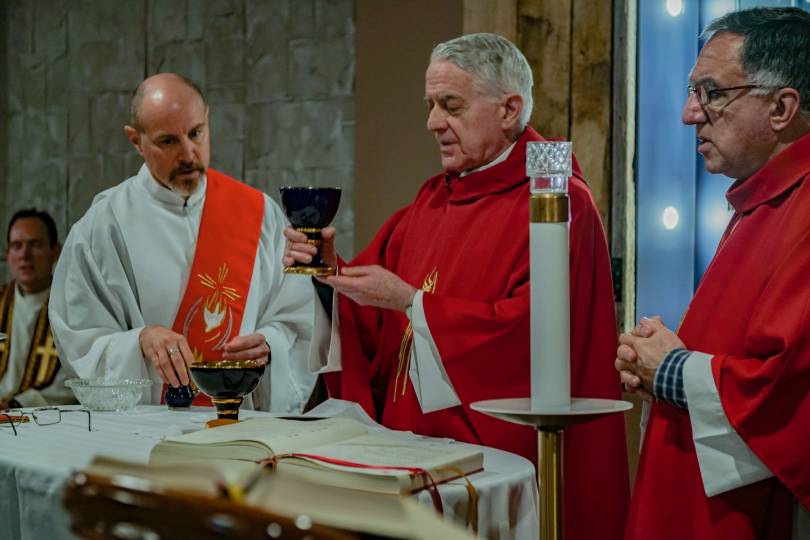 Salt + Light
It is part of one of the earliest and shortest commentaries on the Eucharist as it was celebrated and understood at the time. It was written in the second century around the year 155 by St. Justin Martyr as his first apology in defense of Christians (Cap 66-67: PG 6 427-431). In a few paragraphs, St. Justin speaks of the primacy of Sunday and the importance of the assembly, and he describes what actually takes place and ties in the mission of the Church to the world. Isn’t it amazing to know that today, 1800 years later, we still pretty much do the same thing? The style and structure of the Eucharistic celebration have changed a bit as it formed and transformed the holy common people of God through the years. It has taken on the language and cultural expressions of every race and tongue into which it has brought its awesome gift. But the gift never changes. The Mystery never changes.

The ritual has stayed pretty much the same, and the mission has not changed. 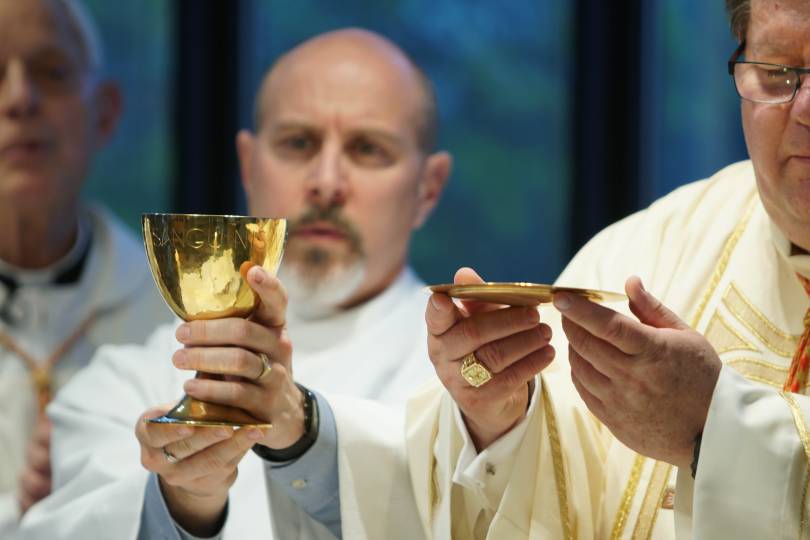 Last week we ended by saying that the very words of the dismissal, ite, missa est became the name of the celebration: Missa. That is why some today will translate those words to mean, “go, the Mass has been.” That word, missa, comes from the same Latin root (mittere, meaning “to send”) as our English word “dismissal,” which also gives us the root to the word, “mission.” That’s what the Mass is about. This is why I think the best translation of ite missa est, is "go, you are sent." It’s worth repeating what we said last week:

We come together to read the word, to worship, and to remember. We feed from the altars of the Word and of the Eucharist, and then we go and take it out into the world. In that sense, the Church is not a fountain where people come to drink, but an irrigation system that, through those who have come to drink, reaches the world everywhere.

Once we are fed, we go in peace, glorifying the Lord with our lives and to announce the Gospel of the Lord.

That's why we call it "The Mass". Write to me and share your thoughts. What have you discovered that helped you participate better at Mass? And then, go and announce the gospel of the Lord.

[Most of the information used in these blog posts comes from the text of a video made by Salt + Light Television in partnership with the National Liturgy Office of the Canadian Conference of Catholic Bishops in 2011 to help explain the latest changes to the language of the English Roman Missal, titled, THE CELEBRATION OF EUCHARIST for the Twenty-First Century. The project was headed by Fr. Bill Burke, and the text of that video was written by Canadian liturgist Margaret Bick, both of whom I owe a great deal of thanks for the vast knowledge they shared with us.]

Now that you are an expert on the Mass, be sure to keep these handy: General Instruction of the Roman Missal Order of the Mass (Roman Missal) Vatican II's Constitution on Sacred Liturgy: Sacrosanctum Concilium.

This post is the final of 13 in our Deacon-structing the Mass series. Here are the others: Part 1: Full, Conscious, and Active Part 2: The Entrance Part 3: The Penitential Rite, Gloria, and the Collect Part 4: Liturgy of the Word Part 5: The Readings Part 6: Homily, Creed, and Universal Prayers Part 7: The Liturgy of the Eucharist Part 8: The Eucharistic Prayer Part 9: Deeper into the Eucharistic Prayer Part 10: The Communion Rite Part 11: Communion Part 12: Concluding Rites

You may be interested in watching these four videos with Fr. Bill Burke that explain the Mass in light of the changes that were made to the language of the Liturgy in English in 2011 and are still relevant. Beyond Words part 1: The Significance of Eucharist in My Life Beyond Words part 2: It's About Mystery, not rubrics Beyond Words part 3: The GIRM - A document of tradition and continuity Beyond Words part 4: The Theological emphases of the 2002 GIRM