Deacon-structing the Letter of James 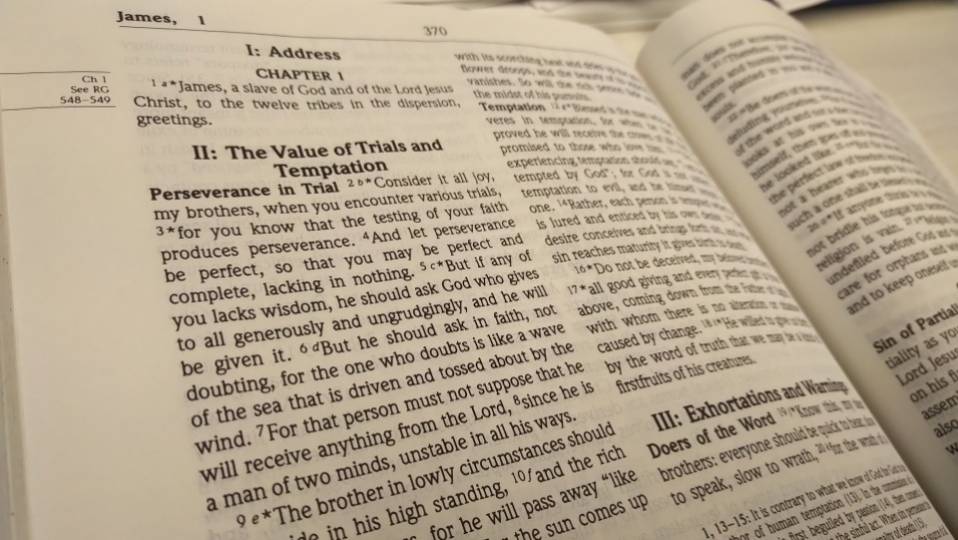 I am a firm believer that all of us should be reading and praying with Scripture every day. Merely listening to the readings once a week at Mass is not enough. If you want to be serious about your Christian walk, you have to read, pray, and study with Scripture. The easiest way to do that for Catholics is to follow the Lectionary. The Lectionary is the book that contains the readings for Mass. They are organized in a three-year cycle so we go through pretty much the whole Bible in three years. If you follow the readings for daily Mass, you will know that there is no Second Reading. The First Reading is always from either the Old Testament or from the Epistles. Following the daily Mass readings is good because, generally, the Lectionary will offer one book at a time that we read in pieces day by day. For the last couple of weeks, the First Reading came from the Book of Samuel and then continued with the First Book of Kings. We did not read the whole books, but we got to follow most of the story of King David and then King Solomon. Starting today, until February 25, we read from the Letter of James. If you’ve never read James, I suggest that you do. Here are a few tips to get you going.

Jesus had two apostles with that name. James, the son of Zebedee and brother of John, was martyred around the year 44 AD (see Acts 12:2). He is referred to as “James the Greater”. It is he who is commemorated at the shrine in Santiago de Compostela. The other James is the one described in Matthew 13:55 as one of Jesus’ brothers. He is also described as “the son of Alpheus” in Matthew 10:2-4. He is also likely the James who was the Bishop of Jerusalem that is mentioned in Acts 15:13-21 and in Galatians 1:19 and 2:12. Tradition holds that he was stoned to death when preaching in Jerusalem and was buried there beside the temple. (You can learn more about the two Jameses by reading, Telling them apart: Which St. James the Apostle?)

He is likely the author of the Letter.

The Letter of James is addressed to "the twelve tribes scattered abroad", that is, Jewish Christians who were dispersed outside Palestine, and was written around 62 AD , which is about the same time he was martyred. Remember that Jerusalem was destroyed in 70 AD, but the revolts that led to the destruction by the Romans began around the year 66 AD. By this time there were Christians all over the Roman world. Paul’s first journey was in 44 AD, and we know there were already Christians in Damascus and Antioch when he was converted around 33 AD. The letter is written in Greek by someone who was very fluent in that language. If indeed it was written by one of the Apostles, it is likely that it was put to paper by a Greek-speaking “secretary”. Still, the content and the way it’s written indicate that it was written before the destruction of Jerusalem. The Letter of James is a short book with only five chapters and is very much an exhortation. It is a letter of encouragement amidst the turmoil and persecution that early Christians would have been experiencing. But primarily, James exhorts his readers to fight poverty and care for the poor (see James 1:26–27, 2:1-4, and 2:14-19, which are the readings for February 19-21; and James 5:1-6). James also exhorts his readers to stand up for the oppressed (see James 2:1-4 and 5:1-6) and to not be "polluted by the world” (see James 1:26-27, which is read on February 19, and James 2:11; 3:13-18 and 4:1-10, which are the readings for February 24 and 25). He also exhorts them to have a wisdom that is heavenly (see James 3:13-18). One of the highlights (for me anyway) is James’ referencing to the Anointing of the Sick:

"Is anyone among you sick? Let him call for the elders of the church, and let them pray over him, anointing him with oil in the name of the Lord. And the prayer of faith will save the one who is sick, and the Lord will raise him up. And if he has committed sins, he will be forgiven." James 5:14-15

Another one has to do with walking the talk. On February 19 we will hear these words:

“Do not merely listen to the word, and so deceive yourselves. Do what it says.  Anyone who listens to the word but does not do what it says is like someone who looks at his face in a mirror and, after looking at himself, goes away and immediately forgets what he looks like. But whoever looks intently into the perfect law that gives freedom, and continues in it —not forgetting what they have heard, but doing it — they will be blessed in what they do.” James 1:22-25

The Letter of James has been included among the 27 New Testament books since the establishment of the official Canon in the 4th century. But it was one of the books that Martin Luther considered removing from his version of the Bible in the 16th century. This is because Luther could not reconcile James’ emphasis on works with Paul’s emphasis on faith.

James writes: “What good is it, my brothers and sisters, if someone claims to have faith but has no deeds? Can such faith save them? Suppose a brother or a sister is without clothes and daily food. If one of you says to them, 'Go in peace; keep warm and well fed,' but does nothing about their physical needs, what good is it? In the same way, faith by itself, if it is not accompanied by action, is dead. But someone will say, 'You have faith; I have deeds.' “Show me your faith without deeds, and I will show you my faith by my deeds." James 2:14-18

But our Catholic faith teaches that faith and works are not opposites. James is clear that faith which does not produce good deeds is just not good faith. So James is not contrasting works with faith, but rather, good faith with bad faith. During this period, this year at daily Mass, we are also reading from the Gospel of Mark, and I think it’s clear that James is merely emphasizing something which Mark also emphasizes: the humanity and practicality of Jesus. Sometimes we get too caught up in ideas and theology when what we need most is pastoral practicality. This, I think, is the main take away of the Letter of James. Hope you enjoy reading it.