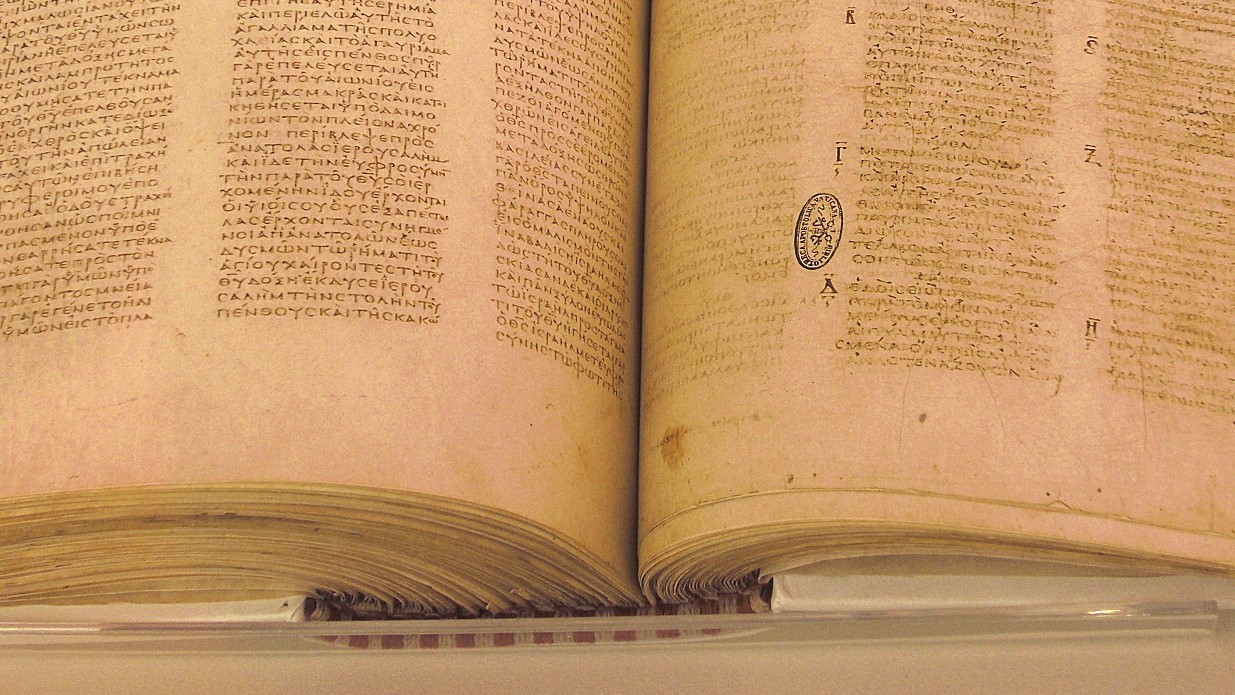 The Codex Vaticanus contains one of the oldest known complete versions of the New Testament. Photo by Leszek Janczuk on Wikimedia Commons. This photo has been cropped from the original and is used under license (CC BY-SA 4.0).
I remember, some 20 years ago, I went to see a production of a play called Bigger Than Jesus. The show was very well done, but, as often happens when non-Christians portray Christianity in the media, it contained many, many inaccuracies. One of the claims that the playwrights made was that the Gospel writers based their accounts on hearsay and that they contradict each other. I suspect most of you have heard people make this claim. I wonder if you know how to respond to them. How much do you know about the Gospels, how they were written and why there are discrepancies in their telling of the same stories? Since September 21st is the Feast of St. Matthew (whose Gospel we have been reading on Sundays this year), and since we were just reading Mark and have just begun to read Luke in our Daily Readings at Mass, I thought it would be a good time to review the Gospels.

Let’s look at the basics.

As I wrote above, all four accounts were written for different reasons, under different circumstances, in different styles, and highlighting different events. The discrepancies in them are not contradictions. In fact, all four Gospels describe the teachings of Jesus in very much the same way—in many instances with the same words. The circumstances may be described as different – maybe this happened here or it happened there; maybe it happened at this time, maybe later – but what Jesus said and what he taught is pretty much the same. And what's more,  the truth behind the teaching is exactly the same in all four Gospels. Some critics will cite the crucifixion story as an example of the contradictions. In Matthew, Jesus says "My God, why have you forsaken me?" (Matthew 27:46). Mark gives the same account pretty much word for word (Mark 15:34). In Luke, Jesus says "Father into Your Hands I commend my spirit" (Luke 23:46). In John, he says, "It is finished" (John 19:30). So which is which? All of them could be true and be accounts of the same story, highlighting different things in order to make different points. In fact, both Matthew and Mark go on to write that after saying, "My God, why have you forsaken me?" Jesus cried in a loud voice. Maybe this cry was "It is finished" or "Father into your hands…" Who knows? What is clear to me is that Jesus in his agony was praying the Psalms: Psalm 31 ("Father, I put my life in your hands") and Psalm 22 ("Why have you forsaken me?"), which, as a Jew, makes perfect sense. Knowing who their audience was may also explain why Matthew, writing to Jews, may have wanted to highlight Psalm 22, whereas Luke, writing to non-Jews may have wanted to, for some reason, highlight Psalm 31. Knowing about John’s depiction of the greater divine mission of Jesus explains why in his Gospel, Jesus says, “It is finished.” In closing, let me say something about the accuracy of these accounts – which is also a criticism I have often heard. The New Testament (these four Gospels, the Acts of the Apostles, the Epistles by Paul, Peter, James, and John, as well as the Book of Revelation) was written between AD 40 and 100, and we have a great wealth of material to support the accuracy of these writings: There are full manuscripts of the whole New Testament dating to as early as AD 350. We have papyri containing most of the New Testament writings dating to as early as AD 300 and a fragment of John's Gospel dating from about AD 130. There are another 5000 or so Greek manuscripts, some 10,000 Latin manuscripts, and some 9300 in other languages. Additionally, there are also some 36,000 references in the writings of the early Church Fathers. Compare this to some other ancient writings: The earliest dating of Caesar's Gallic Wars, for example, of which there are only 9 or 10 copies, is from about 900 years after the death of Caesar. Livy's Roman History, written around AD 17, of which there are only 20 copies, was written around AD 900. Why is it that scholars don't doubt the authenticity of these books but we doubt the authenticity of the New Testament?

When we read Scriptures, we cannot read them as historical accounts. That is not how they were written or why they were written. Even Scripture that is intended as historical cannot be seen as “history” the way we understand history today. When we say that Scripture is “Truth”, we don’t necessarily mean that everything it describes is fact. Scripture is full of factual inaccuracies. Scripture is “Truth” because of its meaning. We need to read Scripture (and therefore the Gospels) as theology. What matters is not whether Jesus was born in a cave or in a house, or whether the Shepherds came before the Wise Men or whether the Wise Men were kings or astronomers, or whether Herod was king at the time. What matters is the meaning behind all these details. This is why it’s important to read Scripture with a guide. There are many Scriptural study guides available, as well as websites and books of Scriptural reflections to help you with your reading. Have you read the Gospels? Why don’t you sit down and read one of them and then write to me to tell me about what you found.