Deacon-structing The Cry of the Poor: part 2 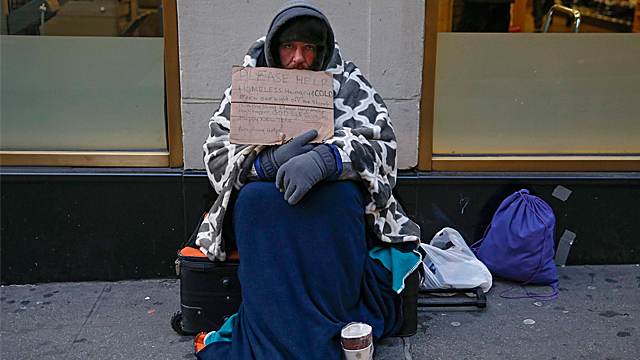 Last week we learned that the Church loves the poor. We have what we call a “preferential option for the poor.” The Church has been very good at caring for the poor and the needy worldwide. So why did Cardinal Hummes of Brazil tell Cardinal Bergoglio, now Pope Francis, to “remember the poor”?
Perhaps because the Church has been so good at caring for the poor, we: you and I, have neglected caring for the poor. Because we have the Missionaries of Charity and the Brothers of the Good Shepherd and so many other congregations dedicated to helping the poor and it’s easy to say, “oh, the St. Vincent de Paul Society does that” or “that’s why we have Share Life and they provide for all those agencies that do such good work.” So we don’t do it. All we do is write a cheque, or we don’t write a cheque because we know others will and we say “when I have a better job I’ll help the poor.” In The Joy of the Gospel, Pope Francis says that this option for the poor is not “a mission that is reserved only to a few” (#188). We must all have a preferential option for the poor. Because God has a preferential option for the poor. I have to be honest, I struggle with this. I have the same attitudes that many of us have. We think, “Why can’t they just get a job?” or “if they worked harder or made better choices they wouldn’t be in this situation.” These are attitudes that we have.
James 2:1-5 we read that if we go to a gathering and someone wearing fine clothes arrives and we say, “Have a seat here, please,” while to the one who is poor we say, “Stand there,” or, “Sit at my feet,” we have become judges with evil thoughts. If I walk past a homeless person and think, “why can’t she just get a job?” I am doing the same thing.
I’ve always been moved by that reading from the Letter of James. Who would you treat better if they came to your parish? Who would get more attention? A good-looking, rich, famous person, like George Clooney and his lawyer wife, or a smelly homeless person like Sherry who talks to herself?
We must change our attitudes on the poor and the marginalized. For an explanation, I take a page from my friend  Joe Zambon. Joe is a Catholic singer/songwriter and wrote a song called, “Remember the Poor.” He says that he also struggled with this same question, “why should we care for the poor?” He realized that God prefers the poor because compared to God, we are all poor. When in the presence of God, all of us are poor beggars; we are all weak, blind, deaf, disabled; we are all orphans and refugees; we are all slaves. That’s why Jesus constantly cared for the poor and the sick. That’s all over the Book of Isaiah and in other books of the Prophets it says that when we arrive in the Promised Land the blind will see and the deaf shall hear – that’s a message we’ll hear constantly during Advent. When we arrive at our final destination we will be poor no more.
But for now, we are poor. And because we are a people of signs and symbols – we live in a material world and so we have physical signs that point to something spiritual, something greater (that’s why we have Sacraments) – every time we care for the poor we are reminded of how God cares for us, who are poor, and how much we need God. There is no one who has ever lived or who is alive today or who will ever live who does not need God.
But Pope Francis wants us to do more than just care for the poor. Listen to what he writes in The Joy of the Gospel.

“This option – as Benedict XVI has taught – is implicit in our Christian faith in a God who became poor for us, so as to enrich us with his poverty. This is why I want a Church which is poor and for the poor. They have much to teach us... in their difficulties they know the suffering Christ. We need to let ourselves be evangelised by them.... We are called to find Christ in them, to lend our voice to their causes, but also to be their friends, to listen to them, to speak for them and to embrace the mysterious wisdom which God wishes to share with us through them.” (#198)

We are called not just to care for the poor but to be poor ourselves. Again, I struggle with this. This past Summer I interviewed another Catholic songwriter, Fr. Richard Ho Lung for a Perspectives on Consecrated Life– he founded the Missionaries of the Poor in Jamaica. Fr. Ho Lung was a Jesuit priest, like Pope Francis – he taught at a prestigious Jesuit school in Kingston, Jamaica – but felt that he could not ignore the poor. He needed to live with the poor. So he did. He founded the Missionaries of the Poor, a community that now exists in many countries. I asked him if it wasn’t enough that we only cared for the poor. Do we also have to be poor? He said, “Absolutely!” It’s not enough to just care for the poor; we have to be a poor Church for the poor.
Did I say that I struggle with this? I don't think anyone is saying that we have to sell everything we own and give it to the poor – but let me leave you with this: Perhaps we need to pray and meditate on what it means to be poor. Can we simplify our lives? Do I really need three TVs? Do I need 25 pairs of shoes? Do I need to have a café latte every day on my way to work? Can we get rid of things that make it harder for us to depend on God? That’s why Jesus says that it’s very difficult for a rich person to enter Heaven. When we are rich, we have it all, we are not in need and we can solve all our own problems. When we are poor, we have nothing – we depend on others for help; it’s easier to depend on God.
Joe Zambon’s song is called Remember the Poor.
He sings,

Let’s not forget who we are. Next time you go  to receive the Eucharist, think of who you are receiving, the one who became poor for our sake – the one who sends us to care for those who are not as fortunate as we are. Think of who we are, the poor beggars who need Christ and let’s pray that our ears be opened that we may hear the cry of the poor.
And if you’re in Toronto and happen to go by the corner of King and Jarvis on a sunny morning, don’t walk by; stop and say hello to Sherry.
--
CNS photo/Shannon Stapleton, Reuters