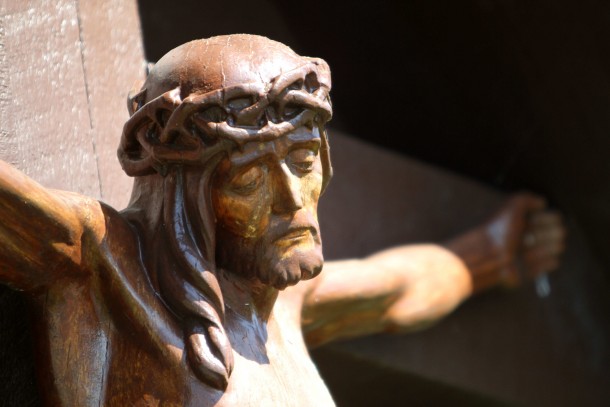 Today is the Feast of the Triumph of the Cross. Last week on the blog, we looked at why we honour the Cross: Because it reminds us that Jesus died to save us. And this is where I have a problem. Why do we need to be saved by Jesus’ death? I remember growing up learning that we are made clean, that we are redeemed by Christ’s blood, that Jesus’ death forgives all our sins. St. Peter says that we are ransomed by the blood of Christ (1 Peter 1:18-19). But why? Why couldn’t God save us by just having one big party instead? Why death? I’m sorry to say that we don’t have the full answer to that. It’s a Mystery. There are Mysteries to our faith — not mysteries that we have to solve, like a murder mystery — but capital “M” Mysteries because they are so awesome that there is no way to explain them. But that doesn’t mean that, “Oh, it’s a mystery and we’ll never figure it out, so let’s forget it.” No, we need to keep praying and trying to understand them. We need to dwell in their presence, because maybe we won’t understand them intellectually, but I can guarantee you that when we dwell in the presence of these Mysteries, they will transform us. And that’s what we’re trying to do here: to grow in the presence of this Mystery of the Cross. Okay, so Jesus really died. That means that in His humanity, God Himself suffered, died and was buried. So, this God, who is life, who loves us so much — more than you can ever imagine being loved — came down from heaven, became a human being, took on all our imperfections, all our sinfulness, all our brokenness and nailed them to the Cross. Why? To destroy them forever. In the seventh book of the Harry Potter series, The Deathly Hallows, there’s an inscription over the grave of Harry’s parents that reads: “The last enemy to be destroyed is death.”  J.K. Rowling didn’t come up with that one. St. Paul wrote it first, 2000 years ago, in his first letter to the Corinthians (1 Cor 15:26). And that’s because death is the result of sin. Back in the Garden of Eden, Adam and Eve had no sin, so they had no death. That’s why God told them that if they ate from the fruit of the tree, they would die (Gen 2:17). And that’s what happened, when they ate from the fruit, out of their disobedience, sin entered into the world. They didn’t die immediately, but they fell under the power of death. So that’s the consequence of sin: death (CCC 1008). So when we say that Jesus died to forgive our sins, we mean that he died to destroy death. We are saved because Jesus destroyed death. I can’t think of a better illustration than that of Aslan in The Lion, the Witch and the Wardrobe. Edmund betrays everyone -– he is disobedient –- and because of that he has to die. That’s the consequence. And the only way to save Edmund is that the one who established the consequences of disobedience would die in his place. And that’s what happens: Aslan takes Edmund’s place. Now, in the case of Jesus, not only does he take our place so that we don’t have to die, but he destroys death for ever — he defeats death. On the third day he is risen! (CCC 655). Now we can be reconciled and reunited with God, into life eternal, as Adam and Eve were in Eden. Come back next week for our conclusion as to why we exalt the Cross. This is the second installment of Deacon Pedro’s three-part reflection on the Feast of the Triumph of the Cross. Click here for Part 1.

Categories:
Deacon-structing
Featured
Tags:
Adam and Eve
Exaltation of the Cross
Garden of Eden
Harry Potter
Jesus
Mysteries
Mystery of the Cross
Sins
St. Paul
The Lion
The Witch and the Wardrobe
Triumph of the Cross