Deacon-structing synods: What are they and why do we have them? 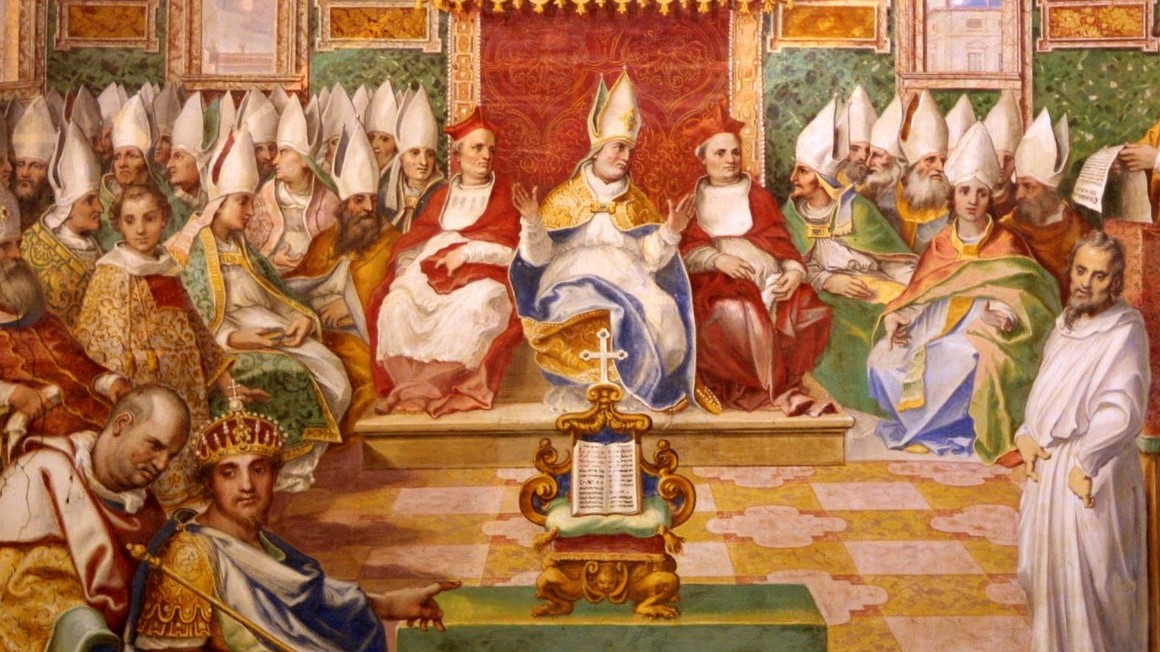 Detail of a fresco in the Sistine Chapel which depicts the Council of Nicaea (Source: Wikimedia Commons)
You may have heard that the next Synod of Bishops is on the topic of synodality. This synodal process begins in October 2021 and concludes in October 2023. You will hear lots more about this synod over the next two years. Some of you may be wondering what a synod is and what synodality means. To begin unpacking that, I want to go right back to our Scriptures. The Church has been having “councils” or meetings to figure things out since the time of the Apostles. The first church council was the meeting that Paul had with Peter, James, and the Apostles to deal with the issue of circumcision for Gentile converts. That was the Council of Jerusalem, and it happened around 48 AD (see Acts 15). Since then, every time the Church encountered an issue that required clarification, a council was held. We’ve all heard of Church councils. The most well-known are Nicaea, Constantinople, Ephesus, Chalcedon, Lateran IV, Trent, and Vatican II. These were all called in order to respond to a crisis, heresy, or question, and as a result, doctrine was defined. For example, the First Council of Nicaea in AD 325 gave us the Nicaean Creed. It also: The Council of Rome in AD 382 defined the complete list of canonical books of both the Old and New Testaments. The Council of Trent (1545–1563) was a response to the Reformation. It affirmed the role and canon of Scripture and defined the seven Sacraments. In total, the Roman Catholic Church has held 21 councils. You may have heard them referred to as “ecumenical councils”. That means that the voting members come from the whole world (from the Greek oikoumene, referring to the “whole inhabited world”). The last council was the 2nd Vatican Council (1962–1965) which was called by Pope John XXIII, not as a response to any specific issue that needed to be defined but as a desire for the Church to relate to the modern world. It's my opinion that the 2nd Vatican Council was probably the last Church council because the Church now has synods. Here’s my logic: After Vatican II, Pope Paul VI established the Synod of Bishops, an advisory board to the Holy Father. Since then, the bishops meet in assemblies (synods) and make recommendations to the pope. Since 1967, there have been 16 ordinary synods, 3 extraordinary synods, and 11 special synods. Ordinary Assemblies: These are synods that deal with universal topics that are pastoral in character and contemporary. Most synods that we can recall from recent years have been ordinary: Extraordinary Assemblies: These deal with more urgent matters. For this reason these are shorter and with fewer participants. The most recent extraordinary synod was the 2014 one dealing with the "pastoral challenges of the family in the context of evangelization". Special Assemblies: These deal with issues that are specific to a particular geographical area. There have been special synods for each continent of the world, Africa, America, Asia, Europe, Oceania, and the Middle East. The most recent one was on the Pan-Amazon Region in 2019. Pope Francis is a big fan of the synodal process. Since the next synod is on the actual topic of synodality, you will be hearing a lot about the actual synodal process over the next couple of months. To get you started, you may be interested in watching my episode Deacon-structing Synods, featuring Sr. Nathalie Becquart, xmcj, Under-secretary for the Synod of Bishops. Synods work because that word, “synod”, doesn’t mean meeting or assembly. It means "walking together". A good image to keep in mind is Jesus walking together with the disciples on the road to Emmaus (Luke 24:13-35). The most important thing that we have to remember about synods is that a synodal church is a listening church. A synod is a “walking with”, and that’s what we are called to do as Church. At the end of the concluding address by Pope Francis from the 2015 Synod on the Family he said:

“To conclude the Synod means to return to our true 'journeying together' in bringing to every part of the world, to every diocese, to every community and every situation, the light of the Gospel, the embrace of the Church and the support of God’s mercy!”

Ultimately that is what we do as Church: We meet people where they are in every place and in every situation. We walk with them, we listen to them, and then we try to do our best to bring to them the truth and the light of the Gospel, the good news! And then we continue to walk with them, through their joys and struggles, through their hopes and fears: We share with them Jesus himself, and then we let Jesus do the rest! And so, a synod on synodality is really a synod about what it means to be Church.