Deacon-structing Mercy: In the Beginning 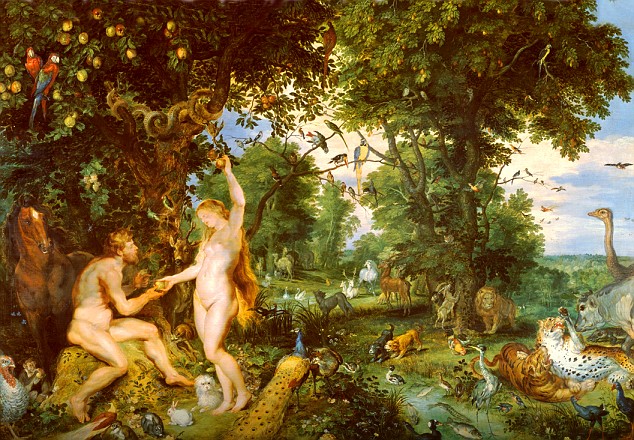 So far we’ve looked at two things that must be present for mercy to take place, we’ve seen the direct relationship between mercy and love and forgiveness. We’ve also looked at why we are being invited to “walk through the door” of mercy this year. This week and next, as we celebrate Christmas and the beginning of the new year, let’s look at why we need mercy in the first place.
To put it very simply: we need God’s Mercy because without it we could never be united with God. Our sinful nature and God’s perfection demand justice. What is just is that human beings receive punishment because we have sinned against God. We have trespassed. We have offended God. And all of that began with the book of Genesis.
The Creation narratives in Genesis are probably the best recognised stories of the whole Bible, yet at the same time, perhaps the most misunderstood. For Christians, the story of Adam and Eve reveal the relationship between God and humans, between male and female, about sexuality, togetherness and separation from God. Pope John Paul II departed from the Genesis story to make the case for his Theology of the Body catechesis on Marriage, Sex and Love. Christian scholars throughout the centuries have referred to the third Chapter of Genesis in order to explain our human brokenness and frailty. It is used to explain the nature of sin and the devices of the tempter. St. Augustine developed the concept of Original Sin using the story of Adam and Eve’s fall. According to the Catechism of the Catholic Church, the first sin was that of disobedience triggered by Adam and Eve’s desire to become like God. Thus Adam and Eve immediately lost for themselves and all their descendants the original grace of holiness and justice. (Catechism of the Catholic Church #396-403, #415-417)
Genesis 3 is for many the basis of moral teaching and moral understanding. For others, it explains the relationship between man and woman, and others who infuse it with Christological meaning, see in it the first mention of the Bible’s redemptive message, in fact, the first mention or insinuation of the messianic salvation. (Genesis 3:15)
For us today, as we continue our reflection on God’s Mercy, Genesis 3 is where it all began.
The shortest question in the Torah is God's first question. Adam and Eve have just eaten fruit from the forbidden tree and, sensing God's presence in the Garden of Eden, they hide among the trees. While they are hiding, God asks Adam a question, which in Hebrew is a one-word question: “Ayeka?” In English it means, "Where are you?"
A refresher for those who haven’t looked at Genesis since their “Children’s Bible” days: First God creates everything. In the second Creation narrative (Genesis 2), God is more “hands on” than in Genesis 1: He “fashions”  Adam; He breathes life into him. He puts him in a garden. He provides this beautiful garden with fruits and plants for him to enjoy. He asks Adam to take care of the garden. God then forbids Adam to eat from the Tree of the Knowledge of Good and Evil, “for in the day that you eat of it, you shall die.” (Genesis 2:17) He then finds a suitable companion for Adam. God creates woman out of man’s rib, and the man and his wife are naked and without shame. This is where we begin our mercy story:
Out of nowhere appears the “serpent”. The serpent is described as “more crafty than any other wild animal.” (Genesis 3:1) The serpent speaks to the woman. (It is not clear whether her husband was with her at the time of the temptation, or whether he was only with her afterwards when they eat of the fruit.) The serpent raises doubts about what God had said: “You will not die. Instead you will be like God, knowing good from evil.” (Genesis 3:5) Adam and Eve eat from the fruit. They do not die, instead their eyes are “opened” and they realise that they are naked. (Genesis 3:7)
They then hear the sound of God walking in the garden, in the cool of the day, and they hide. God calls them, “Ayeka, where are you?” Adam responds by saying they are naked and hiding. God asks them how they know they are naked and then, “have you eaten from the fruit of the tree which I commanded you not to eat?” (Genesis 3:11) Then the blaming contest begins: Adam blaming Eve (and God: “the woman whom YOU gave to be with me”), and Eve blaming the serpent.
God then acknowledges that humans have indeed become like gods, knowing good and evil and, concerned that they would take from the other tree, the Tree of Life, and therefore live eternally, banishes them from the Garden of Eden.
This is where “Original Sin” begins. Our Church teaches that in the beginning we were in a state of original grace. Adam and Eve did not need the Sacraments – Original Sin is the state of deprivation of original holiness and justice. (CCC#417) This is why we need God’s Mercy now.
Come back next week so we can look at that question, “where are you?” in more detail.