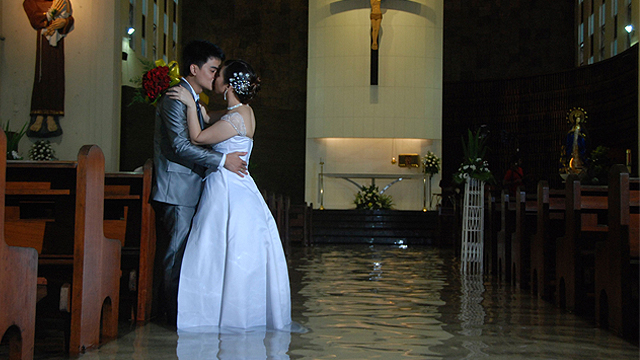 Last week we looked again at something I wrote in 2009 about the nature and design of Marriage. I am curious to know your thoughts on this and whether you think it makes sense. If there are any moral theologians out there, please comment as you would know better than I whether my argument that all Church moral teaching is based on natural law is correct (and whether my explanation of natural law is accurate).
This past week I read a fascinating article in Spanish about the true meaning of the word “matrimony”. The word, the priest who wrote the article explained, comes from the Latin, “matrimonium” which means marriage, but which in turn comes from “matrem” (mater) which means mother. Why would the word for marriage be based on the word for mother? The article explained that “matrem”+ “monium” in Latin refers to the “office of, or condition of the (or being a) mother”. This makes sense because the “matrix” is the uterus, the organ which enables a woman to become a mother (it’s not clear whether “mater” comes from “matrix” or the other way around). Either way, it’s clear the two words (and functions) are deeply related. (not to mention the relationship between the English words “woman” and “womb”).
The whole point of the article was to show the relationship between “matrimony” and “motherhood.” I am not going to (neither do I propose that the Church does) say that all women who enter into marriage have to become mothers (nor that all women have to be mothers – although all women in a sense are spiritual mothers in a way that men could never be – maybe leave that for another time), however can we learn something from looking at the etymology of a word? Can we deny that marriage is intrinsically related to parenting?
Of course, in English, we seldom use the word “matrimony.” Instead we say “marriage.” Looking at the etymology of the word “marriage” is less revealing. “Marriage” is from the French “mariage” which in turn comes from the vulgar Latin “maritaticum”, from the Latin “maritatus.” All these meant “to be given in marriage.” But the origins of the word “marry” (as in to give oneself, or one’s offspring in marriage; wedlock) is uncertain. Perhaps it comes from providing a man with a “mari” (a young woman). Perhaps there is no relation, but “mari” sounds awfully close to “Mary.”
In Spanish although the word “matrimonio” is commonly used for marriage, the word for “to get married” is “casarse.” To be married is to “estar casado” and you could say that a marriage is a “casamiento.” There is a clear etymological relationship between “casar” (to marry) and “casa” (house or home). Again, can we deny that to be married implies creating a home? Is this related to parenting?
The Catechism of the Catholic Church says in chapter 3, article 7 that “the matrimonial covenant, by which a man and a woman establish between themselves a partnership of the whole of life, is by its nature ordered toward the good of the spouses and the procreation and education of offspring; this covenant between baptized persons has been raised by Christ the Lord to the dignity of a sacrament.” (CCC 1601.Emphasis my own)
Later it says, “by its very nature the institution of marriage and married love is ordered to the procreation and education of the offspring and it is in them that it finds its crowning and glory.” (CCC 1652) I always learned that marriage (and the sexual act) has both a unitive and procreative function. Unitive because it brings the couple together into “one flesh” and procreative because that’s what’s meant to happen when people have sex (I love it when people say that they got pregnant by accident; that’s what’s meant to happen!). But is one function more fundamental than the other? Is it important that the couple be “one” for the good of the offspring? Does the fertility of the union allow for the unity? Is what makes marriage "good for the spouses" the fact that it is procreative? [Even if the couple cannot conceive, if in its nature the sexual act is procreative/fertile, the union is made possible. And, as I have written before, it is in that total and fertile union that can only exist between one man and one woman that we come closest to being an image of God, for in that kind of union (which the Church calls Marriage) we come closest to loving another human being the way God loves us, freely, faithfully, fruitfully and totally. But I digress.]
Is Marriage intrinsically related to the natural ability to parent? By merely looking at the meaning of the word, I would say so. The Church teaches that it is so. What do you think? What does the Church say about couples that are not able to conceive? Why is it necessary for a Marriage to be consummated? Share your thoughts and knowledge with me.
Since we’ve looked at English and Spanish, I am curious to know what the words for “marriage” or “matrimony” are in other languages and what their etymological meanings are. Can you help? Send me your thoughts via Facebook (here below), twitter @deaconpedrogm or email:pedro@saltandlighttv.org.
Next week, let's look at what God planned from the beginning.
This is Part 3 of a ten-part series on marriage. Read Part 1, Part 2, Part 4, Part 5, Part 6, Part 7, Part 8, Part 9, and Part 10.
-- CNS photo/Ramoncito Campo, handout via Reuters