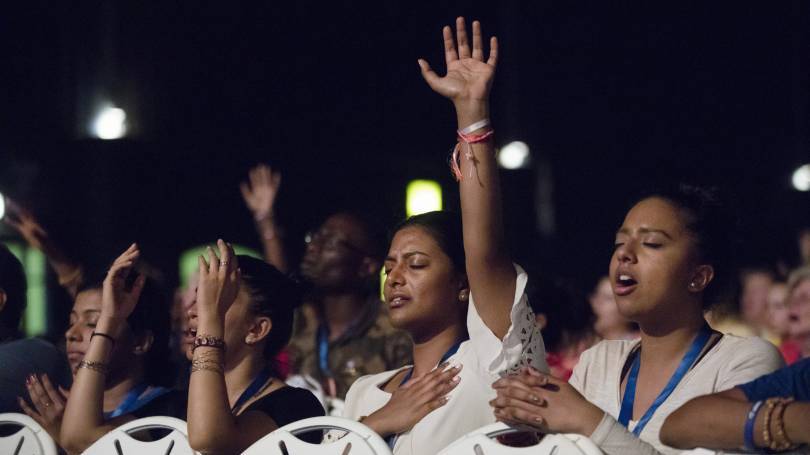 “Here I am, the servant of the Lord; may it be done to me according to your word.”

That’s the theme of this year’s World Youth Day, which concludes today in Panama City, Panama. That phrase is also referred to as “Mary’s fiat”.  This is because Mary’s response to the angel Gabriel in Luke 1:38, in Latin, is, Ecce ancilla Domini: fiat mihi secundum verbum tuum.

It does not refer to Mary’s car.

Fiat is a word in Latin that means “let it be done”.  The etymological dictionary says that this word was used in the opening of Medieval Latin proclamations and commands. It is a form of the word facere, which means "to make, do."  Today’s English usage of the word meaning "a decree, a command or order" dates back to 1750. Of the many talks I’ve heard during this last week, none moved me more than the one by Sr. Bethany Madonna, SV, at the FIAT event hosted by FOCUS, the USCCB, and the Knights of Columbus on Wednesday night. Sr. Bethany told the story of a fellow sister whose name is Sr. Fiat. When she introduced herself to a boy, he thought that it was a weird name. She asked him, “What did God say at the beginning of the Bible, in the Book of Genesis?” This boy knew his Bible, and he answered correctly: “Let there be light.” “Exactly," said Sr. Fiat. “In Latin it’s fiat lux, let there be light.” Then she asked him, “What did Mary say to the angel Gabriel?” Again, he answered correctly, “Be it done to me according to your word.” Sr. Fiat told him the Latin version of that: fiat mihi secundum verbum tuum. Then she asked him, “What did Jesus say to God in the Mount of Olives?” The boy answered, “Not my will but yours be done.” “Yes,” Sr. Fiat said, “fiat voluntas tua.” The boy thought for a while and then said,

“Sr. Fiat, you have the coolest name!”

That story made me smile. It also made me curious as to how many other “fiats” there are in the Bible. I looked it up: 84. Here are others: When Ezra gathered the whole assembly after the return from the exile and exhorted them to go back to the commandments in Ezra 10:12, “All the assembly answered with a loud voice, ‘It is so; we must do as you have said.’” In Latin: Juxta verbum tuum ad nos, sic fiat. When Judith seduced and then cut off Holofernes’ head and brought it back to Bethulia putting an end to that little problem in Judith 13:20, “All the people said, ‘Amen. Amen.’” In Latin: Et dixit omnis populus: Fiat, fiat. Interesting that “Amen” in Latin is translated as fiat. Psalm 41:13 says, “Blessed be the Lord, the God of Israel, from everlasting to everlasting. Amen and Amen.”  In Latin: Benedictus Dominus Deus Israel a saeculo et usque in saeculum. Fiat, fiat. Psalm 88:53 says, “Blessed be the Lord forever. Amen and Amen.” (Benedictus Dominus in aeternum. Fiat, fiat.) Then there is the healing of the centurion’s servant in Matthew 8:13. Jesus says, “Go; let it be done for you according to your faith.” Vade, et sicut credidisti, fiat tibi. And of course, there is the Lord’s Prayer according to Matthew 6:10, “Your kingdom come. Your will be done, on earth as it is in heaven.” Some of you will remember this from when you were young, Adveniat regnum tuum; fiat voluntas tua, sicut in caelo et in terra. I’ve been praying with those words of Mary for over two years now as we prepared for World Youth Day 2019. “Let it be done.” It never occurred to me that every time I pray the Lord’s Prayer, I am praying the same thing, “your will be done.” But to know that God spoke those words at the beginning of creation and that Jesus spoke those words when he healed people, kind of sends shivers down my spine. Last night, at the Prayer Vigil with Pope Francis, the Holy Father asked the young people present if they wanted more. He said:

Weren’t you created for something more? The Virgin Mary understood this and said, “Let it be done!”

Young friends, I ask you: Are you willing to say “yes”? The Gospel teaches us that the world will not be better because there are fewer sick, weak, frail or elderly people to be concerned about, or because there are fewer sinners. Rather it will be better when more people, like these friends, are willing and enthused enough to give birth to the future and believe in the transforming power of God’s love. Are you willing to be an “influencer” like Mary, who dared to say, “Let it be done”? (For the full text visit our blog.)

As we begin to process all that has transpired this last week in Panama, I am thinking that God is asking us to say something that He has already said to us. We are constantly being asked about our own fiat, our own “yes” to God. But no one tells us that God has already given us His fiat.

God has already said yes to you. 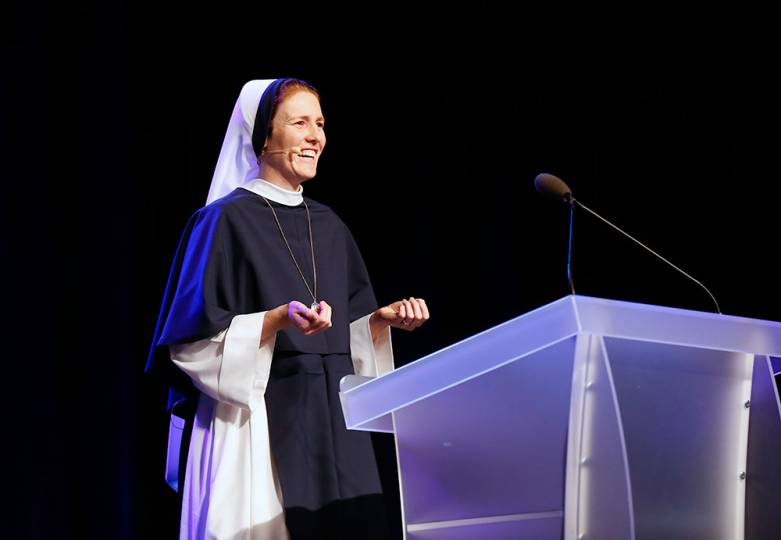 Sr. Bethany Madonna, SV, at SEEK Conference 2017 in San Antonio, TX. Courtesy of FOCUS.
Sr. Bethany concluded: God has spoken His fiat over each one of us. When He created us; when He dreamed of each one of us, He spoke His fiat over us. He said, “let he, let her be done.” And then He saw that it was good. Today and this week, as you ponder what took place here in Panama this week, remember that God already gave you His amen. He already gave you His fiat. Don’t be afraid to give Him yours. May it be done.