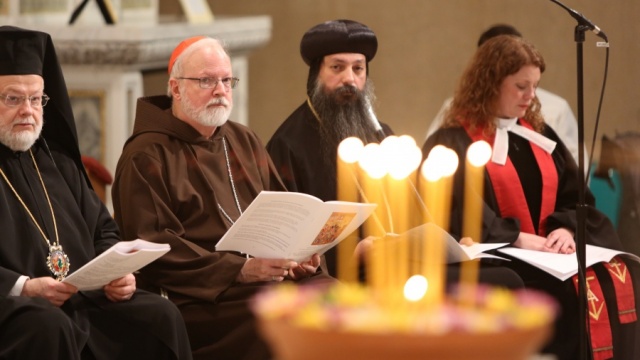 Tomorrow is the beginning of the Week for Prayer for Christian Unity. This special week has been taking place for almost 110 years and is celebrated around the world between the Feast of the Confession of Saint Peter on January 18 and the Feast of the Conversion of Saint Paul on January 25. It’s very simple: We join with people around the world to pray for Christian unity – in worship, reflection, study, and fellowship.
But, Christian unity is not something that should be left for just one week a year; it is something that we should be praying for, and living every day.
Ecumenism is the movement promoting unity among Christian churches or denominations. The word refers to the “representation of the entire (Christian) world,” as it comes from the Latin oecumenicus, meaning “general” or “universal.” The Latin actually comes from the Greek oikoumenikos, which is a word that referred to “the inhabited world” as known to the ancient Greeks. (For those of you who love words and etymology, this comes from oikoumenos, which is the present passive participle of oikein, which means  “inhabit,” which in turn comes from oikos, which is “house” or “habitation.”)
I wish more parishes and Christian congregations would do more to build relations with each other. When I was in the Middle East, working on Living Stones in 2013, I was humbled at how the Melkites, the Greek Orthodox, the Roman Catholics, the Protestants and Anglicans have no issue praying together, and in certain circumstances worshiping together. In fact, over there, they don’t refer to themselves as “Catholic” or “Lutheran” or “Copt” or “Maronite.” They’re all “Christians.” Isn’t that what Jesus prayed for according to John 17:20?
As an aside, this year, as Christians are being encouraged by Pope Francis to sponsor refugees, three  churches in my community of Bradford, Ontario have come together to sposor a Syrian family. The United, Anglican and Catholic congregations have created BRIDG: Bradford Refugee Inter-Denominational Group. We hope that this is one of many activities we can work on together.
If you’re wondering what your plan for Christian unity can be, you should visit the Canadian Council of Churches. You will find all kinds of wonderful resources to get you on your way to practical ecumenism.
This year’s theme is “Called to proclaim the mighty acts of God” (from 1 Peter 2:9) and was developed and chosen for the whole world by the church in Latvia.
Ecumenism, or the work of Christian unity predates Vatican II. Since the beginning, Christians have been sorting out what Jesus meant when He prayed, “may they all be one.” But, Vatican II put out a Decree on Ecumenism, Unitatis Redintegratio. It is a great document that I encourage you to read:

All the faithful should remember that the more effort they make to live holier lives according to the Gospel, the better will they further Christian unity and put it into practice. For the closer their union with the Father, the Word, and the Spirit, the more deeply and easily will they be able to grow in mutual brotherly love.
This change of heart and holiness of life, along with public and private prayer for the unity of Christians, should be regarded as the soul of the whole ecumenical movement, and merits the name, “spiritual ecumenism”.

Let me leave you with a thought: Ecumenism requires conversion. For all of us. We may not know what Jesus wanted when He prayed that we all would be one, and we may not know God’s plan for ecumenism, but we do know that we are called to be the Church that Christ founded and intended.
And so we pray:

God, from whom life flows in rich diversity, unite us in love. May we be mindful of Christ as the source of our life together and strive to build up your Kingdom of love. We pray in the unity of the Spirit.