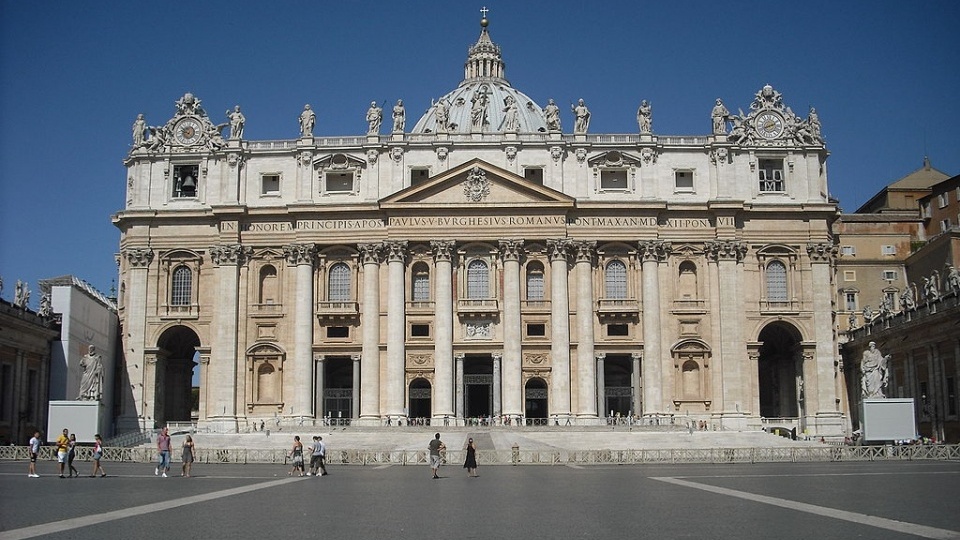 Jolly Janner [Public domain], from Wikimedia Commons.
In January 2016 I wrote this post: Deacon-structing Mercy: Doctrine and someone sent me a comment. I had said something about the permanency of doctrine and that person was challenging my use of the word doctrine. This is what I wrote, “Doctrine is Doctrine and no Pope has the authority to change it.”
Perhaps I should have used the word “dogma.” For the next couple of blog posts I invited you to send me in your thoughts on the matter. What does the word “doctrine” mean and what do Church people mean when they use the word doctrine? What do you mean when you say “doctrine” and what do you think that word refers to? Does doctrine refer merely to Catholic “teaching” or is it specific teaching? What’s the difference between doctrine and dogma? I asked for your help– especially you dogmatic theologians out there. I said I’d write the column once I’d heard from enough of you.

That was over 2 years ago. No one wrote in.

Either no one cares (which I doubt considering the amount of garbage circulating the Internet about how this pope is changing doctrine), or no one knows (which I also doubt) or no one really is prepared to challenge my use of the word. I suspect that for most of you, the answer is that you don’t really know. Since then, however, we saw the Pope make a little change to the Catechism as it pertains to Capital Punishment – did he change doctrine? So we're back to the question: What is doctrine and can it be changed? In the last 2 years I have had several conversations with many people who know more about this sort of thing than I do and so it’s time to deacon-struct doctrine. And it all comes down to this: Wouldn’t it be good to have a list? Wouldn’t it be good to have a list of those Teachings that are 'reformable' and those that are not? What are the basic Teachings that we have to accept in order to be able to call ourselves Catholic?

But I am going to do my best – I do invite your comments, because together we may be able to understand all of this better. Let’s start by looking at the Catechism of the Catholic Church:

Magisterium of the Church

There is no definition of the word Doctrine in the Catechism. Doctrine means teaching. The Church specifically uses the word Doctrine to mean all Teaching (ie. the content of the Magisterium) that has to do with matters of Faith and Morals but are not directly revealed by Christ. If the Church teaches something about mathematics, it may be Truth, but it is not Doctrine because it does not have to do with Faith or Morals. A good definition is that Doctrine is a teaching of the universal Church proposed as necessary for belief by the faithful. Doctrine is all teachings that are definitely proposed or proposed as true but not in a definitive manner (so not proclaimed or proposed). Still, Doctrine is infallible (without error) and unchangeable. Examples of Doctrines: All Christological Truths revealed in Scripture ie. the Resurrection, the Incarnation, also, other revealed Truths by Christ, like the Holy Trinity and the male-only Priesthood.

Dogmas are Truths that are revealed by God. The Magisterium proposes them because they are “contained in Divine Revelation or having necessary connection with them, in a form obliging the Christian people to an irrevocable adherence of faith.” (#88) Dogma is the part of Doctrine (truth) which has been divinely revealed and which the Church has formally defined and declared binding. Not all Doctrine is Dogma.  Most Church teachings are not Dogma. In short, all Dogmas are Doctrine, but not all Doctrine is Dogma. Examples of Dogmas: Papal Infallibility, the divinity of Christ, the Immaculate Conception, the Assumption of Mary and the real Presence of the Eucharist. [See this handy-dandy list at Simple Catholic Truth]

The pope can define Dogma – an ex-cathedra (literally, "from the chair". It refers to the pope making a decision with the full authority of his office) promulgation – or it can be defined by an ecumenical council. Even though the pope can define a Dogma ex-cathedra, it has never been done without consultation with the College of Bishops. There have only been two ex-cathedra promulgations by a pope, both to do with the Virgin Mary: The Dogma of the Immaculate Conception (in 1854 by Pope Pius IX), and the Dogma of the Assumption (by Pope Pius XII in 1950). We can say, however, that neither of these were news to believers. The Faithful were practicing these Dogmas for centuries before they were defined. That's why the Pope had to define them. There is disagreement as to whether there have been more than just these two – from what I have researched, all the others, were received by a Council and therefore defined by a Council. Maybe some of you know more about this and would like to share. I hope this is helpful. Despite the "handy-dandy" list of Dogmas shared earlier, there is actually no official of non-negotiable Catholic Teaching. But there is a hierarchy. But come back next week to find out what it is and see if we can come up with a list. You may be interested in reading this post, Deacon-structing Relativism so you can see how one of these teachings works when applied to real life.