Deacon-structing Doctors of the Church, part 6 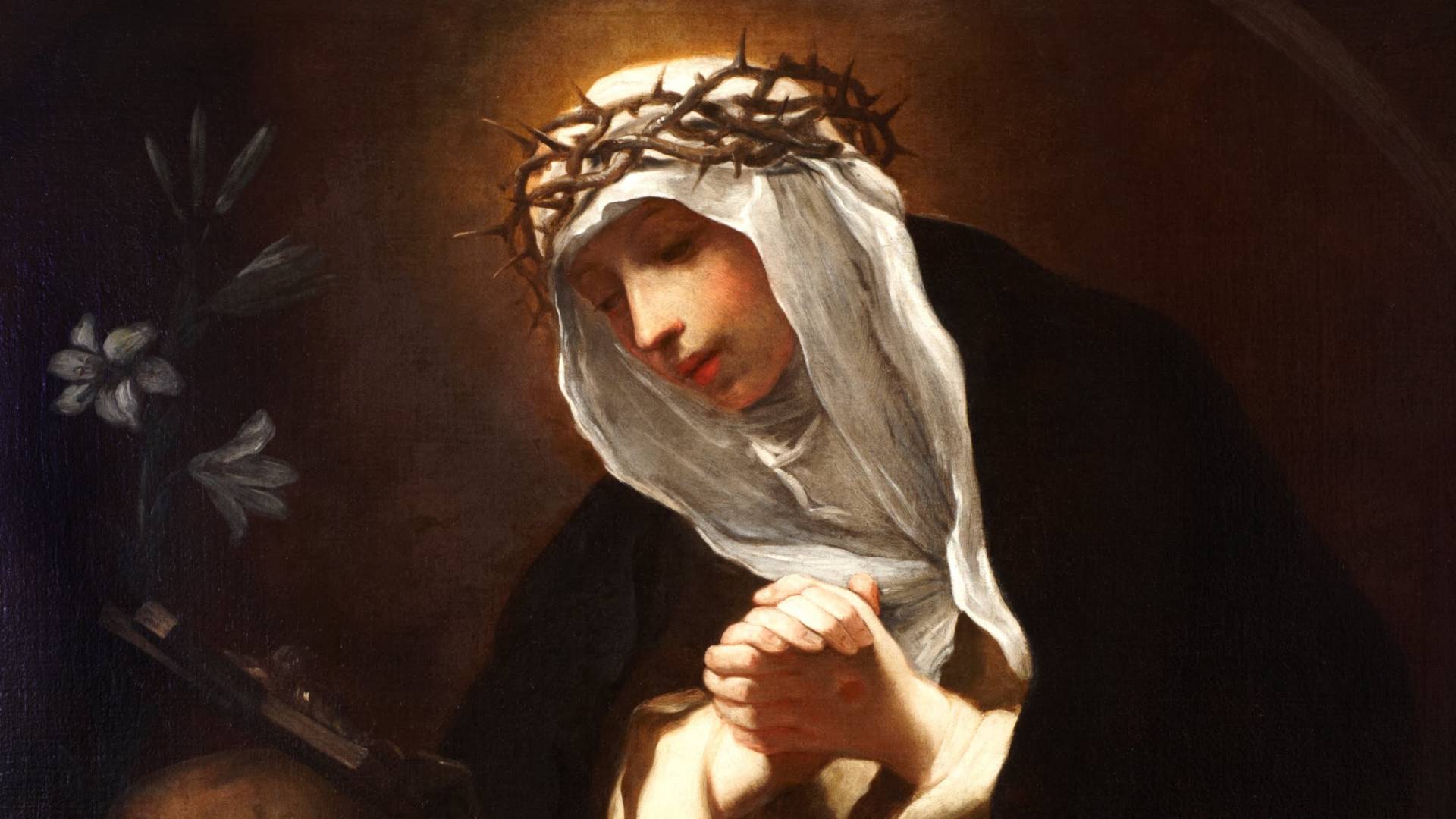 Detail of St. Catherine of Siena by Baldassare Franceschini (Source: Wikimedia Commons)
Over the last 5 weeks, we’ve learned that there are 36 Doctors of the Church. They are called “doctors” (which means teachers) for their contributions to the theology or doctrine of the Church. We started with St. Gregory the Great, St. Ambrose, St. Augustine, St. Jerome, St. Thomas Aquinas, and St. John Chrysostom.  Then we looked at St. Basil the Great, St. Gregory of Nazianzus, St. Athanasius, St. Bonaventure, St. Anselm, and St. Isidore of Seville. In part three, we learned about St. Peter Chrysologus, St. Leo the Great, St. Peter Damian, St. Bernard of Clairvaux, St. Hilary of Poitiers, and St. Alphonsus Liguori. Then, in part four, we learned about St. Francis de Sales, St. Cyril of Alexandria, St. Cyril of Jerusalem, St. John Damascene, St. Bede the Venerable, and St. Ephrem. Last week, we learned about St. Peter Canisius, St. John of the Cross, St. Robert Bellarmine, St. Albertus Magnus, St. Anthony of Padua, and St. Lawrence of Brindisi. Today, we will look at the last six. They were named doctors in my lifetime, between 1970 and 2015, and it includes the four women Doctors of the Church.   Teresa of Avila is known as the Doctor of Prayer. She was a mystic and Carmelite nun who lived in Spain in the 16th century. Together with St. John of the Cross, she reformed the Carmelite Orders for both men and women. For this reason she is also known as the founder of the Discalced Carmelites. Her writings are considered among the most remarkable mystical ones in the Catholic Church. These include many poems and letters, Concepts of Love, Exclamaciones, The Life of Teresa of Jesus (her autobiography), The Way of Perfection, and The Interior Castle.

“ It is always a great thing to base your prayer on prayers which were uttered by the very lips of the Lord.” – St. Teresa of Avila

Catherine of Siena was a third order Dominican (which means she was a laywoman) and also a mystic who enjoyed an intimate relationship with Christ. She lived in the 14th century during a tumultuous time in the Church and wrote hundreds of letters to kings, leaders, and popes giving them counsel in order to restore unity in the Church. She is best remembered for travelling to Avignon to try to convince the pope to return to Rome. Her main written work is The Dialogue of Divine Providence, dictated while she was in ecstasy; it is a series of conversations between God and the soul.

“Preach the truth as if you had a million voices. It is silence that kills the world.” – St. Catherine of Siena

Therese of Lisieux, known as “the Little Flower” was also a Carmelite nun who lived in France in the 19th century. She is probably one of the most popular saints, known for her simplicity. She entered the convent at age 15 and died at age 24 from tuberculosis. Even though she never left the cloister, she was named Patron of Missions.  She is known for her spiritual memoir, The Story of a Soul, the first part written under the direction of her prioress (who also happened to be her sister) and the second as a letter written at the request of her sister Marie, while the third part was another memoir written under the direction of a later prioress. In it, Therese describes her “Little Way”, a simple and practical approach to the spiritual life.

“And in spite of this trial, which robs me of all comfort, I still can say: 'Thou hast given me, O Lord, delight in all Thou dost.' For what joy can be greater than to suffer for Thy Love?” – St. Therese of Lisieux

John of Avila was a priest and mystic who lived in Spain in the 16th century. He was a great preacher who established schools and colleges through the Andalusian region, where he also made efforts to reform the clergy.  He wrote many sermons, spiritual conferences, biblical commentaries, letters, and treatises. His major work is Audi Filia (Listen, O Daughter), a treatise on Christian perfection.

“Withdraw your heart from the world before God takes your body from it.” – St. John of Avila

Hildegard of Bingen was a visionary, artist, composer, pharmacist, and Benedictine abbess who lived in Germany in the 12th century. She is also considered to be the founder of scientific natural history in Germany. She began having visions at the age of three, and these continued all her life. She wrote many musical compositions and hundreds of letters. She also wrote two volumes on natural medicine and cures. As well as her Scivias (short for Sci vias Domini, or “Know the Ways of the Lord”), she wrote Liber Vitae Meritorum and Liber Divinorum Operum, which also describe her visions.

“There is the music of Heaven in all things.” – St. Hildegard of Bingen

Gregory of Narek was a monk, poet, mystical philosopher, and theologian who lived at the end of 10th century in Armenia and is considered one of the foremost figures of Armenian theology and thought. He authored a commentary on the Song of Songs and various hymns, speeches, and homilies.  He is best known for his Book of Lamentations, which is considered a masterpiece of Christian spiritual literature.

And that brings us to the end of our quick review of all 36 Doctors of the Church, holy men and women who have much to teach us. I hope that this has helped you get to know them a little bit and piqued your interest to find out more, read what they wrote and taught, and maybe get to know them better. I know I have a few more books to add to my library!