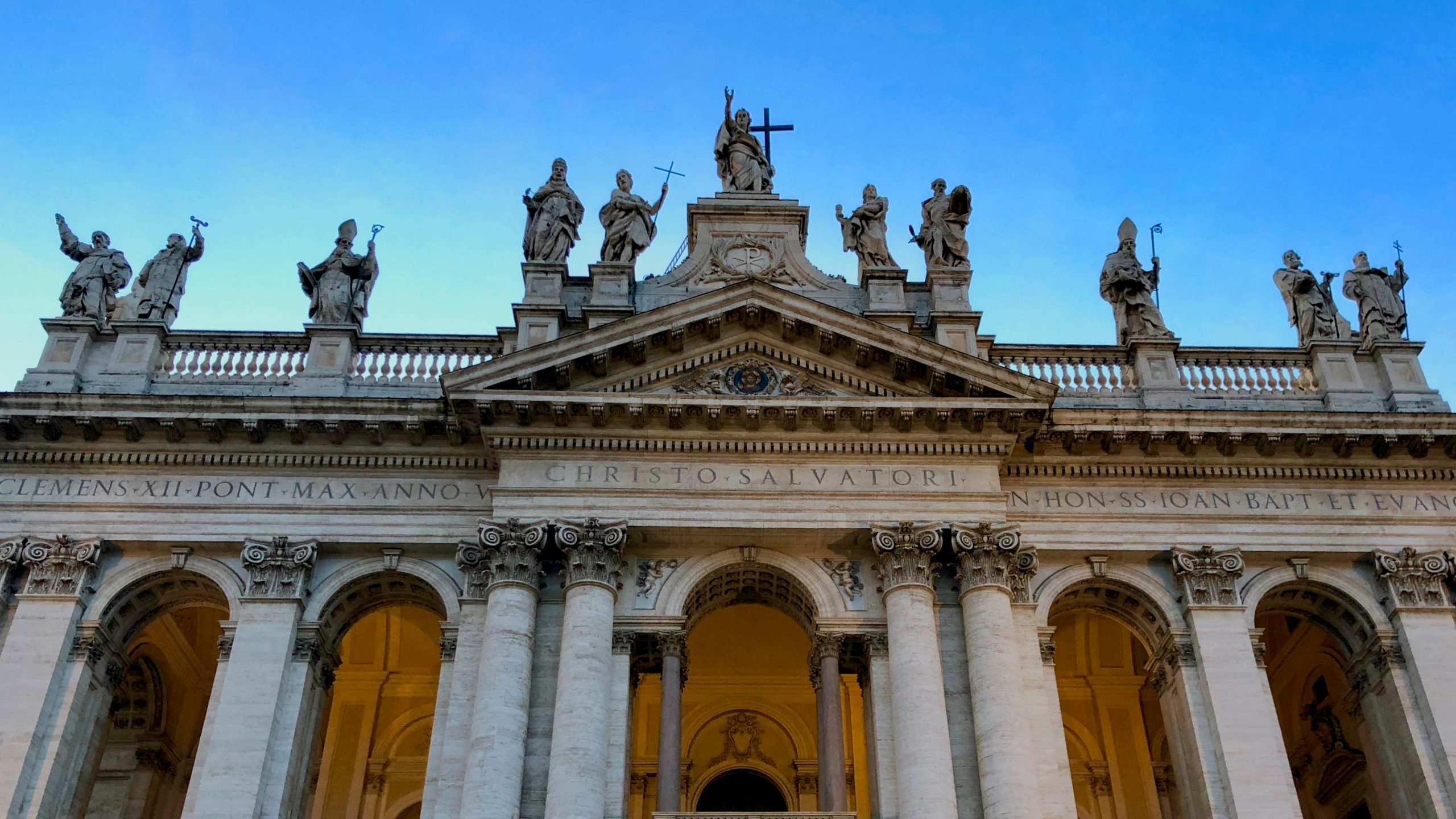 The Archbasilica of St. John Lateran in Rome. Photo credit: Sonse on Wikimedia Commons, used under the terms of license CC BY 2.0
We are all familiar with feast days and solemnities in our Catholic liturgical calendar. These are the days when we commemorate saints, or sometimes events, that are important in our tradition. This month we celebrate two feasts that are particularly interesting as they do not commemorate a person or an event but rather a building, or the dedication of a building. Today, November 9th, we celebrate the Dedication of the Lateran Basilica, and on November 18th we remember the Dedication of the Basilicas of St. Peter and St. Paul. The other feast day in our calendar that commemorates the dedication of a building is on August 5th, when we celebrate the Dedication of the Basilica of St. Mary Major. Why do we commemorate the dedication of these buildings? Let me start with St. Mary Major. It was built in the 5th century after the Council of Ephesus declared that Mary is the “Mother of God”. It is the oldest church in the West dedicated to the honour of the Blessed Virgin Mary. It is called “major” because it is one of four “major basilicas” in Rome. The other three are — you guessed it — St. John Lateran, St. Peter's, and St. Paul Outside the Walls. The original building of St. Paul Outside the Walls was erected by Constantine over the place where St. Paul is buried, located outside Rome's Aurelian Walls on the Ostian Way, which is why it is “outside the walls”. St. Peter’s Basilica was also begun by Constantine and completed by Pope Sylvester. It was built over the burial site of St. Peter and is the most prominent church in Rome; however, it is not a cathedral, as it is not the seat of a bishop. The Cathedral of Rome is St. John Lateran. The official name is the Cathedral of the Most Holy Saviour and of Saints John the Baptist and the Evangelist in the Lateran. It is also referred to as the Papal Archbasilica of Saint John in Lateran, or simply the Lateran Basilica. It is the cathedral of the Diocese of Rome and the seat of the bishop of Rome, who is the pope. St. John Lateran is also considered to be the "mother church" of all the world. St. John Lateran was also built by Constantine on land that had belonged to the Laterini family and is the oldest and highest ranking of the four papal major basilicas, which is why it is also called "archbasilica". It is also oldest basilica in the West. In fact, only a few years before it was built, it had been illegal to practice Christianity in the Roman Empire. It was Constantine who changed all that. Feasts commemorating the dedications of these four basilicas have been observed since the 12th century. What’s interesting to me is that on August 5th when we commemorate the dedication of St. Mary Major and on November 18th when we celebrate the dedication of the Basilicas of Peter and Paul, the focus of those celebrations is Mary and the Apostles, respectively. So we can also say that August 5th is a Marian feast and November 18th is a feast of the Apostles Peter and Paul. However, November 9th is a day when we actually celebrate the building. It is a day when we are called to remember the importance and symbolism of the church building. It’s true that we do not need buildings in order to be Church. Today's second reading, from St. Paul's First Letter to the Corinthians, tells us that we are God's building (1 Corinthians 3:9-11, 16-17). The Church is the people, the Body of Christ. St. Paul says that we are the temple of God. That's the temple that matters. However, the buildings are important as they are a symbol of our interior temple, and that temple is holy. On the Feast of the Dedication of St. John Lateran, the Office of Readings includes a sermon by St. Caesarius of Arles (470-542). In it he says:

“Whenever we come to church, we must prepare our hearts to be as beautiful as we expect this church to be. Do you wish to find this basilica immaculately clean? Then do not soil your soul with the filth of sins. Do you wish this basilica to be full of light? God too wishes that your soul be not in darkness, but that the light of good works shine in us, so that he who dwells in the heavens will be glorified. Just as you enter this church building, so God wishes to enter into your soul, for he promised: I shall live in them, and I shall walk the corridors of their hearts.”

Those are great words to think of each time we enter a church. They are also good to think of when we remember that all church buildings are dedicated. Recently, my parish celebrated the 80th anniversary of the dedication of the original parish building. Remembering these days helps us remember where we came from. And today, as we commemorate the dedication of that building, St. John Lateran – and also when we remember the dedications of St. Mary Major and St. Peter and St. Paul Outside the Walls – let’s remember where we came from: a small, persecuted church which spread to every corner of the globe to become the largest religion in the world. St. John Lateran is where that new season of the Church began.