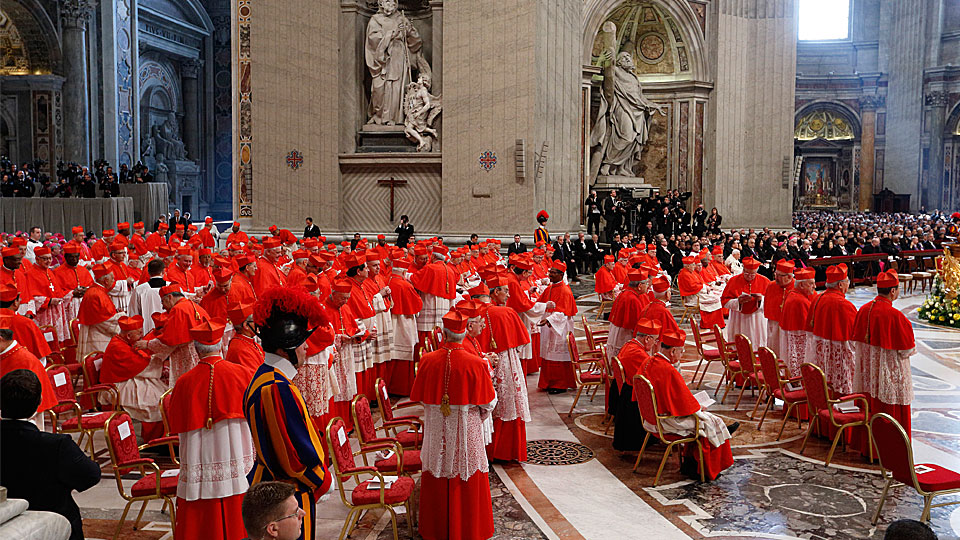 New cardinals exchange greetings with fellow cardinals during a consistory at which Pope Francis created 20 new cardinals in St. Peter's Basilica at the Vatican Feb. 14. (CNS photo/Paul Haring)
In light of the Consistory this weekend, I was going to deacon-struct Cardinals, but seeing as Fr. Rosica wrote a wonderful Reflection on the Role of Cardinals in the Church on Tuesday, I figured I could do something a bit different. Yesterday, Pope Francis made 17 new Cardinals. Thirteen of them will be Cardinal-electors, eligible to elect the new pope at the next Conclave. This gathering where Cardinals are "made" is generally referred to as a "consistory." In short, a consistory is a meeting between the cardinals and the Pope (comes from the Latin con-sistere which means "stand together"). During this consistory, there is a ceremony to "induct" the new members of the College, where they "get their red hat." During the ceremony, which is not a Mass, the new cardinals profess their faith and swear fidelity and obedience to the pope and his successors. Afterwards they are called one by one and the Holy Father gives them a red zucchetto, a red hat called a a biretta, their cardinal’s ring and the assignment of their titular church. So what is the significance of these symbols? Zuchetto: The small skullcap worn by clergy everywhere (zuchetto means small gourd or squash). It's likely that the original purpose of the zuchetto was to keep the head warm. It now serves to identify the ecclesiastical rank of the person wearing it. Bishops wear purple and even though the Holy Father can wear any of the colours, he normally wears white to match his vestments. Cardinals wear red. Priests and deacons can wear black zuchettos, but this is very rarely done. In 1968, Pope Paul VI made the use of the zuchetto obligatory among bishops. Biretta: It is a square, three-cornered hat that is worn over the zuchetto. Any clergy can wear a biretta (I have a black one). Bishops wear purple ones. Cardinals wear red. The biretta is the correct liturgical headgear for those in Holy Orders while "in choir" (that is when they are participating in but not celebrating or con-celebrating a liturgy or presiding at a prayer service), but its use is optional. More commonly some priests wear it while outdoor during services such as burials or processions. Ring: It symbolizes the cardinal's bond to the papacy. It is a sign of the office of the cardinal and the authority that the position has. All bishops wear a ring. The bishop's ring symbolizes that he is "wedded" to his diocese (like a wedding band), but also, like the Cardinal's ring, it is a symbol of his office and authority. Titular Church: Finally, each Cardinal is assigned what is called a "Titular Church." This tradition dates to the fact that, in the 10th century, the right of electing the pope was reserved to the bishops of the seven dioceses surrounding Rome, the priests in charge of the titular (or parish) churches, and the clergy in charge of the deaconries (traditionally given to deacons who were appointed to oversee different parts of Rome.) These were known collectively as "the cardinals." Because clergy from outside of Rome came to be named cardinals, they were assigned responsibility for certain Roman churches, so they could have an established position in the pope's diocese and join the group of electors. Today this is merely a title and the Cardinal has no responsibility for their titular parish, although they do maintain some connection, as in presiding at Mass at their parish when in Rome. It's worth noting that, except for the titular churches and the colour of the vestments, these symbols are the same (or similar) to those of bishops, as most Cardinals are bishops or Archbishops. However, it is not a requirement for a cardinal to be a bishop. Even though cardinals belong to the college of electors, they are not hierarchically higher than bishops. There are only three orders to Holy Orders, diaconate (deacons), presbyterate (priests) and episcopate (bishops). Cardinals have no authority over bishops (in the same way that an archbishop is not ranked higher than a bishop; an Archbishop is merely a bishop of an archdiocese). It is possible for someone who is not a bishop, to be named a cardinal (since it is a title). It used to be that one didn't even need to be a priest to be named a cardinal (they would be named to the college of Cardinal-Deacons). Pope John XXIII changed that. One of the better known non-bishop Cardinals was Fr. Avery Dulles, SJ, who was named a cardinal in 2001. The change made by John XXIII would have required for the priest to be ordained a bishop first. Cardinal Dulles refused and he was named a cardinal without being a bishop. A cardinal who is not a bishop still is allowed to wear the appropriate episcopal vestments, the mitre, the crozier, the zucchetto, the pectoral cross and episcopal ring. It has been tradition of the Church that Archbishops of certain archdioceses are automatically named cardinals. That is why the Archbishop of Quebec City or Toronto have normally been named cardinals. Pope Francis has broken that tradition by naming cardinals from remote places that have never had cardinals or that are not even archdioceses. To learn more about the Consistory and about the College of Cardinals, be sure to watch Vatican Connections next Friday.