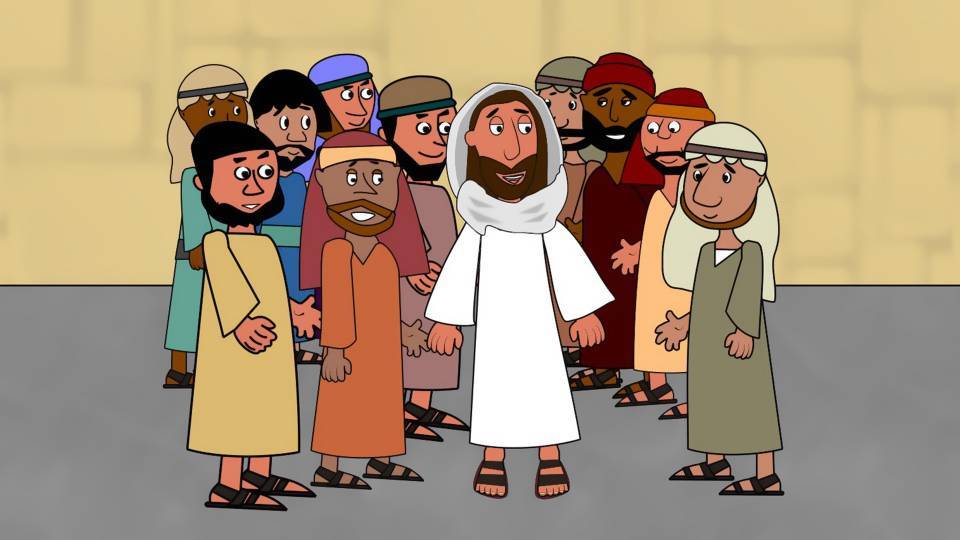 Image: Sue Bentley/FreeBibleimages.org This whole week, beginning today, we will be listening to post-resurrection narratives from the Gospels (and from the Book of Acts). We'll hear about Mary Magdalene and the other women running to tell the disciples. We'll hear about a gardener who turns out to be Jesus. We'll also hear about two disciples whose hearts were burning within them as they walked along the road with a stranger. We are going to hear about how the disciples were scared, troubled and confused. Perhaps the Gospel that is most honest to what was really going on with the disciples those first days is Mark.

“He upbraided them for their lack of faith and stubbornness, because they had not believed...” (see Mark 16:9-15)

I think it would have been great to be there when Christ appeared to the disciples, but I would not have wanted to be there to be scolded by Jesus.

Not the way Mark describes it.

It is very common in the Gospel of Mark to have disciples who just don’t get it. Mark is the shortest of the 4 Gospels – probably the one written first and probably written in haste to give hope to an early Christian community that was persecuted. The Gospel is only 16 chapters long and is full of phrases like ,”and suddenly...” and “they went in haste...” and “immediately...” There is an urgency to the Gospel of Mark. Mark also presents a very real Jesus – one who gets upset, he’s troubled, he gets angry, he laughs. And the disciples are very confused. Jesus keeps telling them that he’s going to die, he shows them that he’s the son of God and they just don’t get it.

The Gospel we hear at the Easter Vigil this year is from the first ending of the Gospel of Mark. The earliest manuscripts with the Gospel end in chapter 16, verse 8: The women go to the tomb and an angel tells them that Jesus is alive and to go tell the disciples to wait for him in Galilee. Then the women run away, “and don’t say anything to anyone, for they were afraid.”  On the first Saturday of Easter we will hear the second ending to the Gospel of Mark. This second ending is believed to have been written much later – it’s an addition and it’s not very specific. It’s a very short resurrection narrative. But, what do we have? Mary tells the disciples that Jesus is alive and they don’t believe it. The two disciples who were out in the country (presumably the two on the way to Emmaus), tell them that Jesus is alive and they don’t believe it. And this is why I would not have wanted to be there.

Because I would not have believed it either.

Had I been there, I would have seen Jesus arrested and saw him killed. This man whom we thought would be the salvation of Israel, is dead – it’s over. And the disciples thought, "we’re probably next!" I would have been up there, “mourning and weeping,” scared, despairing with no hope. And Jesus appears and it’s like old times “you guys didn’t get it.... well, do you get it now?” He upbraids them – he scolds them – like a parent corrects a child.

It’s a loving thing to do.

Psalm 118 tells us that this is something God does when we sin: “The Lord has punished me severely, but he did not give me over to death.” But Jesus doesn’t punish severely; he corrects, lovingly and then He probably forgives. Then.... “ok guys, let’s move on... it’s show time!” And he sends them to proclaim the good news to the whole creation.

This is what resurrection is all about: Jesus makes all things new.

He takes these guys who don’t get it, who don’t believe, who lack faith and who are stubborn and turns them into evangelists. We see the results in the book of Acts. In Acts 4:13-21, Peter and John (who were, according to Mark also lacking in faith and belief), just healed a paralytic and 5000 people were converted and baptised. They just faced-off with the scribes and the Sadducees, and they stand up to the Chief Priests, Anas and Caiaphas – those guys who condemned Jesus – and speak to them with an authority that only Jesus can give.

This is really Good News!

It's true, because, who does not struggle with unbelief, with lack of faith? Who does not struggle with fear and despair? But that’s OK. Jesus doesn’t dwell on that; He takes it and makes it new. He can still turn us into proclaimers – into evangelists. He sent the Holy Spirit to the disciples but we have also received the Holy Spirit. We receive it at Baptism and at Confirmation. In fact, we receive the Holy Spirit with every Sacrament and we receive it in a special way every time we go to Mass and gather around the Eucharistic table. And every time, at Mass, we are sent: The priest (or deacon) at the end of Mass will say, “Go and announce the Gospel of the Lord”

That’s code for “Go proclaim the good news to the whole world.”

We go to Mass with our fears, our sadness, our despair, our lack of faith, our stubbornness and lack of belief and Jesus appears to us. He makes himself present to us in the Word and in the Sacrament. He corrects us and teaches us through his Word and forgives us. He gives us his Holy Spirit and then He sends us off to proclaim the Good News.

That’s the meaning of Easter.

But it’s not just the story of the Acts of the Apostles. It’s our story too. It happens to us. Now. Today.