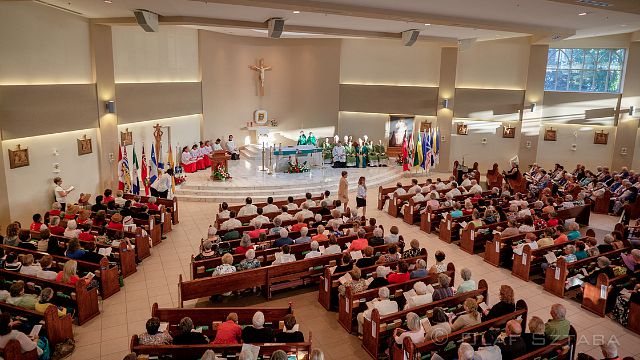 What happens when you gather together some of the most committed, passionate, dedicated Catholic women from across the country in one church? Vancouver’s St. Francis Xavier church in Vancouver learned the answer: the congregation outsings the choir and the decibel level threatens to take the roof off the building.
The Catholic Women’s League opened their 95th annual national convention August 16 in Vancouver. More than 800 members took part in the opening mass. Their enthusiasm was palpable.
Addressing the women during his homily Vancouver’s Archbishop Michael Miller thanked the women for their “prophetic mission of wisdom”.
Appearing to beaming as he spoke, the archbishop explained that to be wise means to have insight into how things really are. For Christians that means being able to see when something is “of God” and when it is not. Women, he said, have a particular sensitivity for discerning God’s presence and have a duty to be “practical prophets of wisdom”.
Why are women called to be practical prophets? According to the archbishop - who cited the Second Vatican Council and Pope Francis - because women’s gift for focusing on the person in a given situation is opens the door for God’s mercy. He said “now is the hour when women are called to use their feminine genius to protect and promote the dignity of every person.”
On hand for the opening Mass and opening ceremony was the Honorable Judith Guichon, Lieutenant Governor of British Columbia. She reminded the women that Canada “is a nation born of conversation, not conversation” and the CWL has been an integral part of that conversation, providing a strong foundation for communities. She called on the league’s 85,000 members to continue working to uphold the Christian values that provide a solid foundation for the communities that make up the nation.
The CWL convention continues until August 19 in Vancouver.
Photos courtesy of Olaf Photo.