Culture & Religion: How do we stay true to ourselves? 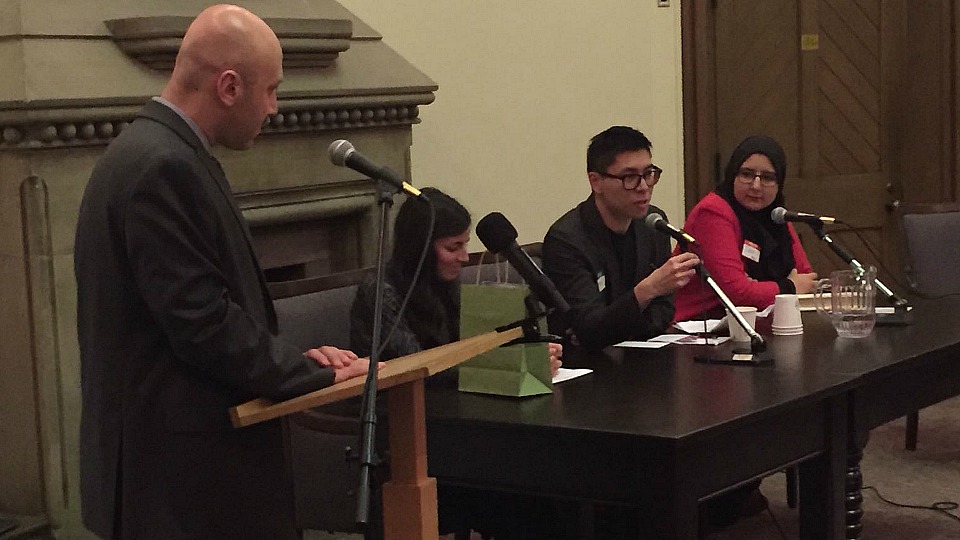 (S+L Photo: Ahmet Tarmici, National Director of the Intercultural Dialogue Institute (far left) moderates a discussion as Dalia Hashim (far right), Kevin Lo (middle right), and Naomi Shore (middle left) answer questions related to religion and culture in Canada today.) How do we stay true to ourselves in a multicultural context? That was the question posed to a series of panels at the University of Toronto this past week. The event took place a week after the massacre of six Muslims at the Centre Culturel Islamique de Québec, and was seen as another expression of the solidarity that exists between various religious traditions in Canada. The event opened with a moment of silent prayer of remembrance for the victims and their families. The first panel was made up of Rabbi Ed Elkin, spiritual leader of the First Narayever Congregation in Toronto, John Dadosky, a Catholic professor of theology and philosophy at Regis College, and Muneed Nasir, a prominent local Muslim leader, President of the Olive Tree Foundation and Executive Director of the Cordoba Centre for Civic Engagement and Leadership (See S+L photo below). 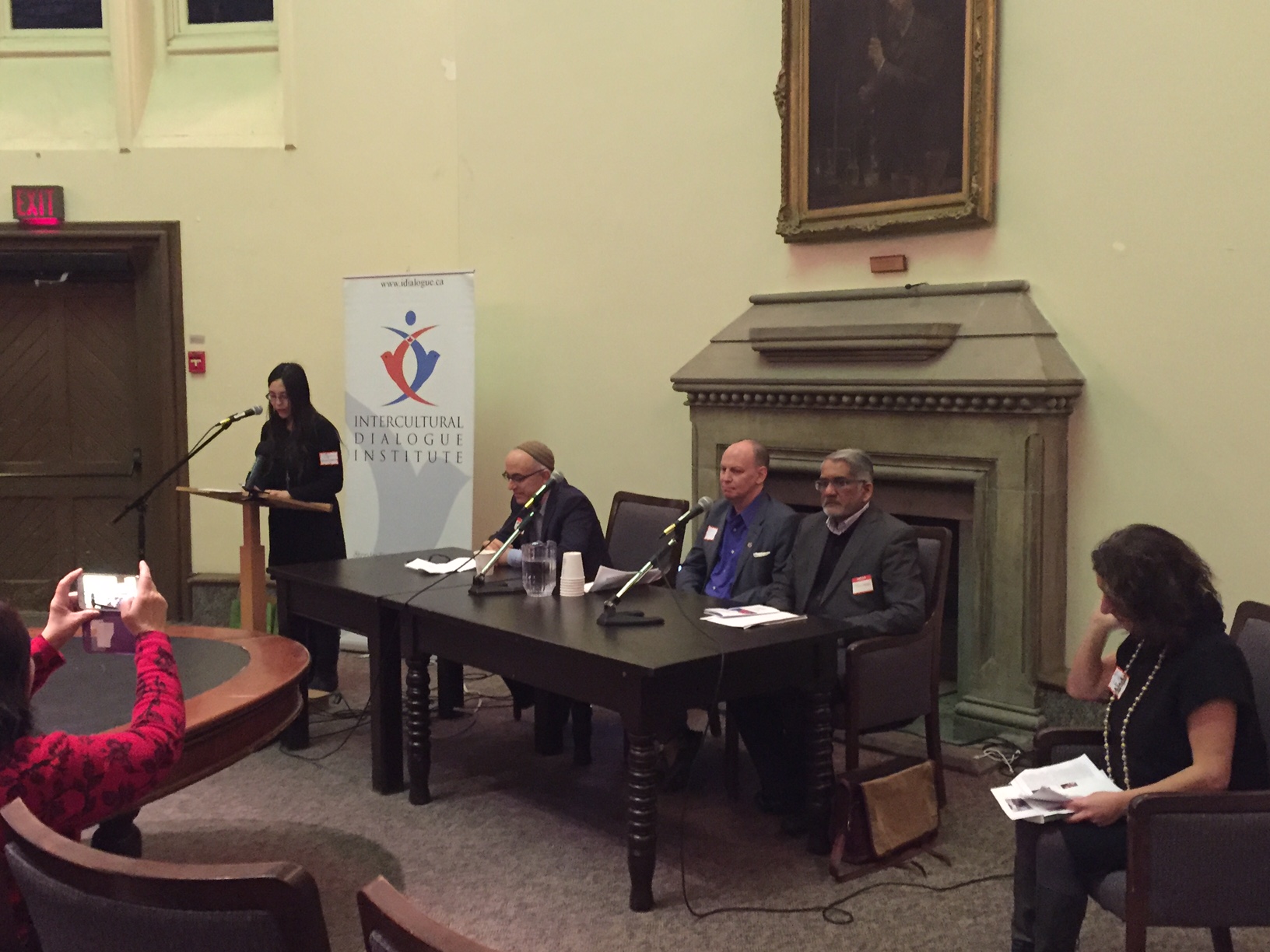 The panelists shared their respective communities' experience of inculturation and some of the challenges facing modern pluralist societies like Canada in the 21st century. All three panelists argued that Judaism, Christianity and Islam are "inculturable" respectively, meaning they do adapt to the culture they find themselves in. All pointed out the wide variety of expressions of the three religions in different parts of the world. A major point of emphasis in the discussion was the positive and unique pluralist reality that exists in Canada. Because of its size relative to its tiny population, its history of complementarity between French and English cultures, its openness to immigrants, and its geographic location, Nasir called it "one of the last outposts of real multiculturalism in the world." Hashim—representing Islam, Lo—representing Catholicism, and Shore—representing Judaism, took the floor next (see photo above). From a young adult perspective, they shared their experiences of living faith in Canada in the 21st century, in Toronto—one of the most diverse cities in the world. Shore reflected on the public image of her Jewish community as "exclusivist" and noted that despite Judaisms healthy ability to inculturate, she and other young practicing Jews are now challenged to see the Jewish Covenant "not as a pass for an exclusive club, but as a gift of responsibility" for humanity. Lo examined the contemporary challenges posed to religious practice by the prevailing secular culture. He outlined three challenges facing the Catholic community: 1) a popular culture that pushes individualism, 2) a lack of tools to share the faith effectively, and 3) a lack of real, authentic community experiences. Hashim emphasized the importance of knowing Islamic history, pointing to the fact that Islam boasts an established history in North America, thanks in large part to the faith and struggle of Muslim-Africans brought to the new world as slaves. These old, established Muslim communities have inculturated as effectively and efficiently as any other religion, thanks to the religion's cultural flexibility. All three young adults spoke of the generational evolution in their faith communities. Many second-generation Muslim-Canadians, for example, are now entering adulthood and are developing their own distinct Muslim-Canadian culture from their parents who originally immigrated. An atmosphere of respect and comfort was evident at the event. So was a great love for Canada and its unique ability to find space for different cultures and religions to be themselves. The horrific massacre in Quebec loomed over the discussion, but it was heartening to sit back and realize that this event had been planned long before the attack. Indeed hundreds of such events are happening all over the country at any given time. It made me realize that the incredible displays of solidarity from Canadians after the shooting did not come from a theoretic and hollow idealism, but were grounded in genuine relationship. Canadians know each other, thanks to events like this. Let the dialogue continue! Special thanks to the Muslim-Catholic Student/Young Adult Dialogue and the Intercultural Dialogue Institute, together with the Office of Ecumenical and Interfaith Affairs at the Archdiocese of Toronto and the Canadian Council of Imams for organizing the event.