Compassion unmoored from truth: the reality of what drives the pro-choice movement 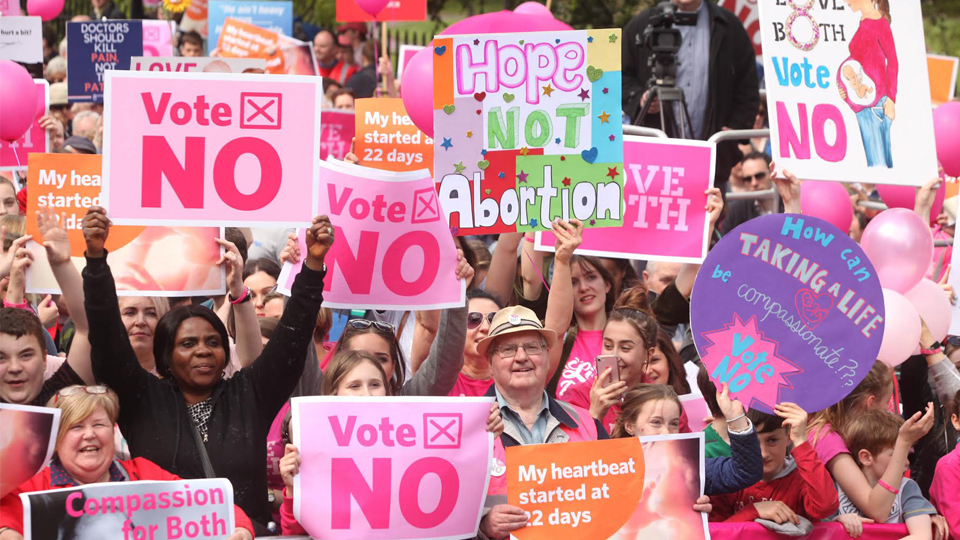 CNS Photo/ Paul Haring
I spent much of this weekend struggling to find words that might capture my heart-sinking-into-stomach feeling on the majority “yes” vote for Ireland’s national referendum for the legalization of abortion. I saw photos of women arriving at Dublin airport a few days ago, carry-on luggage wheeled behind them, some with posters reading “#RepealThe8th,” cheering and pumping fists as they passed by photographers. And I wondered. I streamed videos of crowds chanting “Yes! Yes!” as they waited in anticipation of the official statement on the referendum result.  The mood was eerily festive, like the royal wedding, or that long-ago crowd chanting “Barrabas!” in front of Pilate’s praetorium. And that made me wonder, too. I couldn’t help thinking of stories from my own life, like the tiny scar on my leg, that permanent reminder that I was tested for Down Syndrome before I was born. Or the time when, as a teenager, with mixed feelings of courage and shame, I purchased a pregnancy test for my friend who was too frightened to buy one for herself. Or the time in university when my friend nonchalantly announced that she thought she was pregnant and counted on me to accompany her to her abortion, if necessary. And so watching these scenes from Dublin last weekend, I wondered about these people, wondered what their stories are. Because I do not believe that the pro-“choice” activists in Ireland and those around the world are evil people or pushing an agenda they themselves believe is morally repugnant.  Rather, as the Catholic author Dawn Eden Goldstein wrote just a few days ago:

My fellow pro-lifers who are shocked at what happened in Ireland need to understand that people don’t vote for abortion because they are heartless, but rather because they honestly believe it is the compassionate thing to do. Until we get this, we cannot reframe the debate. Secularists are succeeding vs. life, marriage, & biological sex because they’ve convinced voters that their agenda, not the Church’s, is compassionate.  Vatican II rightly noted we Catholics bear some responsibility for this (see Gaudium et Spes 19, par 3). So if we wish to create a culture of life, we can’t rely upon a cult of activism (i.e. slicker pro-life messaging).  We need to change our own hearts even as we prayerfully seek to change others’.  In other words, we need to get holy.

When I think of my stories, and the countless more that live in the minds and hearts and this-very-moment-ness of women and men – both in Ireland and abroad – what strikes me, yes, is the common thread of compassion that weaves its way throughout. Compassion is what I felt for the friends who came to me, scared or numb or misguided and surely terrorized by their vision of a future which they now believed to be on the verge of destruction.  And compassion is what my mother felt for the baby she carried in her womb, afraid and assuming that genetic “abnormality” and a “good life” were mutually exclusive.  And this is to say nothing of countless other situations, women subject to the violence of poverty or sexual abuse or their own culture that churns out messages which fuel a terribly misguided but ever-present longing for love, belonging, and value alongside the treatment of sex and the human person as commodities to spit up and chew out.  Women in this world often feel scared and alone and like their ability to carry life is a shameful burden, not one upheld and celebrated and supported.  Is it any wonder, then, that “compassion” aimed at the dignity and respect of women has taken a disastrous turn, where abortion is seen as a compellingly “compassionate” solution? We tend to associate compassion with goodness, truth, and beauty.  But what I’m slowly learning in life is that compassion untethered from truth works at the service of evil, striking against the very heart of life.  The road to hell, as the saying goes, is paved with good intentions. As Catholics, we need to recognize that compassion unmoored from truth is what guides much of the pro-choice movement.  And we need to respond with even greater force – with the force that creates life itself, the Life of God, who is both Truth and that greatest of aspects, Mercy – by its very definition, the act of Compassion meeting suffering and despair with Love. Ultimately, we must realize that behind every story is a person. And while these stories are important, the “story” cannot end there.  The referendum may have passed, but the issue of pregnant or possibly-pregnant women being scared, alone, and vulnerable has not.  If we are to be truly pro-life – and truly Christian – we have a sacred duty and responsibility to enter into stories of fear and confusion and pain as friends, enlightened witnesses to God’s love – for every mother- and father-to-be, and every child of theirs, born or not. For surely Jesus has no ears to hear their stories, no hearts to feel compassion, and no hands in this world with which to image the Father’s love and mercy and very Life towards them, but our own.