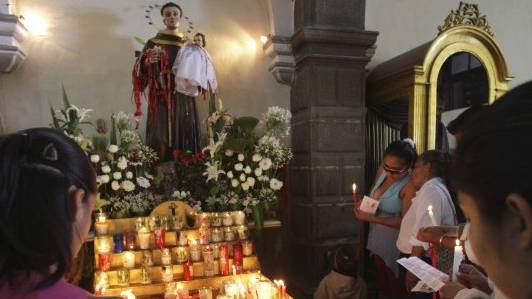 At the Salt + Light the name of St. Anthony usually sparks a rather comedic debate. You see, we have several staff members of Italian origin and several staff members the Portuguese persuasion. Usually they agree on everything....until the name "St Anthony" is pronounced.  The saint, who is often invoked to help find lost items, was born in Lisbon, Portugal but lived a good part of his life and died in Padova, Italy. The one thing that finally ends the debate over St. Anthony really "belongs" to is the agreement that he is a model of holiness and devotion to him is not limited to any one geographic region. People around the world credit St. Anthony with helping them "find" things, whether it be a lost umbrella, a vocation, or much needed help in times of difficulty. With the generous support of the Longo family, Salt + Light has commissioned a feature documentary about this much venerated saint. The film is being produced and directed by Edward Roy, an award winning filmmaker whose previous projects include "The Colour of Love" featuring the artwork of Fr. Marko Rupnik, SJ. Roy posted some photos from a recent interview conducted for the project on his blog. He shares what he's finding out about this much loved saint.