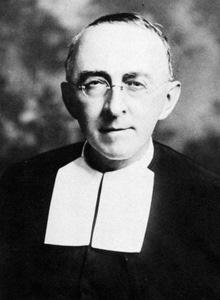 During a meeting April 2 with Cardinal Angelo Amato, prefect of the Congregation for Saints' Causes, the pope signed a decree recognizing that Brother Chatillon lived the Christian virtues in a heroic way. Before Brother Chatillon can be beatified, the pope would have to recognize a miracle attributed to his intercession. Brother Chatillon, who lived 1871-1929, taught in schools in Quebec and at the Christian Brothers' novitiate. Pope Benedict also signed decrees that pave the way for several beatifications: -- He recognized the martyrdom of French Norbertine Father Pierre-Adrien Toulorge, who was guillotined in 1793 during the French Revolution. -- He recognized the martyrdom of 22 Oblate priests and a layman, Candido Castan San Jose, killed in 1936 during the Spanish Civil War. -- He formally recognized the miracles needed for the beatifications of two Italian priests, two Italian nuns and a Spanish nun. In addition to recognizing the heroic virtues of Brother Chatillon and of three Italian nuns, the pope recognized the heroic virtues of a 14-year-old boy from his native Bavaria. Bernhard Lehner was born in Herrngiersdorf, Germany, in 1930, and entered the minor seminary in Regensburg when he was 12. He caught diphtheria and died shortly after his 14th birthday in 1944.