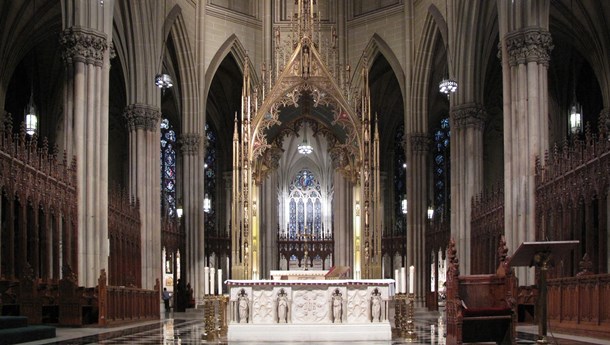 Pope Francis has left the American capital for New York City, the second stop of the apostolic journey in this country. With less than 40 hours in the metropolis, the supreme pastor will have a packed schedule: praying with the clergy and religious, visiting the diplomats, praying at Ground Zero, meeting children and families of migrants, and celebrating Mass in Madison Square Garden. After New York City, the Pope will set out for Philadelphia, the last city in the trip. Pope John Paul II once told Cardinal John O’Connor, then Archbishop of New York, “I am only the Bishop of Rome, but you are the archbishop of the capital of the world!” This raised eyebrows among many, but it does have some truths to it. NYC is home to the United Nations Headquarters, and is arguably the world’s most important financial and cultural centre. New York City is also one of the strongholds of Catholicism, served by the Archdiocese of New York and Diocese of Brooklyn. The two dioceses are separated by the East River, and serve 10.73 million Catholics through 556 parishes. I enjoy New York City’s numerous beautiful architectural works, and churches of all denominations fascinate me too. The city hosts the greatest number of cathedrals in the world; visiting all of the 4 Catholic cathedrals (and a former cathedral), 13 Orthodox cathedrals and 1 Episcopalian cathedral in the city was a joyful yet tiresome experience for me. In this blog post, I will recommend noteworthy Catholic churches for pilgrims to this city.
[ Cuba --> Washington --> New York City --> Philadelphia ] 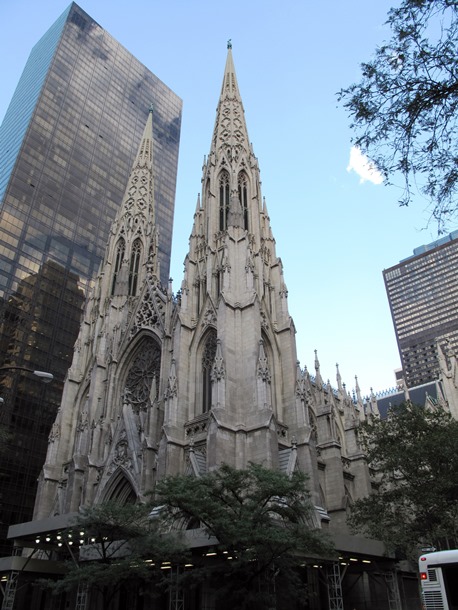 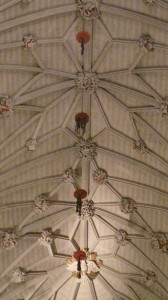 Situated prominently in the heart of midtown Manhattan, St. Patrick’s Cathedral is the exception to otherwise financial and business buildings. Shining in its pure neo-Gothic style, the white façade and interior have just been cleaned and massively restored, just in time for the papal visit. Construction of this new cathedral began in 1858, and only completed 20 years later due to the Civil War. The spacious cathedral can accommodate 3,000 people, with its spires rising rise over 100 metres. The two pipe organs contain more than 9,000 pipes and 206 stops. Four pre-Vatican II cardinals’ red galeri (former ceremonial hats with tassels used by clergy, presently still depicted in the coat-of-arms of prelates) are proudly hung in the ceiling of the cathedral, a popular custom of cardinalatial sees. St. Patrick’s is the only church in the Americas that has received a pope more than three times: Paul VI in 1965, John Paul II in 1979 and 1995, Benedict XVI in 2008, and Francis in 2015. It is also the first American church that a pope set foot in. 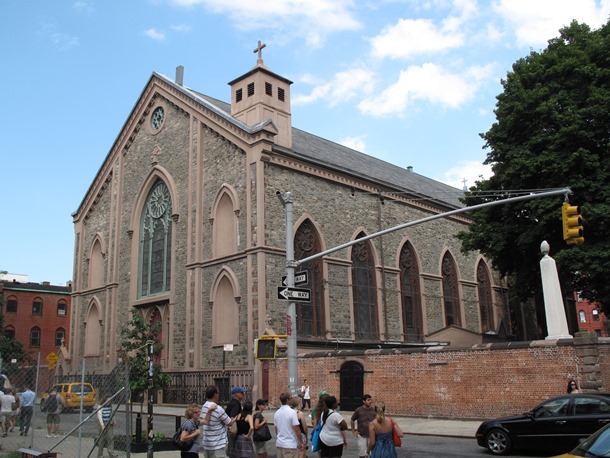 The Diocese of New York was created out of the primatial see of Baltimore in 1808, along with Bardstown, Boston and Philadelphia. New York and Cincinnati became the third and fourth metropolitan sees of U.S.A. in 1850, after Baltimore and St. Louis did. Built between 1809 to 1815, Old St. Patrick served as the seat of the Bishop of New York until 1879 when the new St. Patrick’s Cathedral was dedicated. 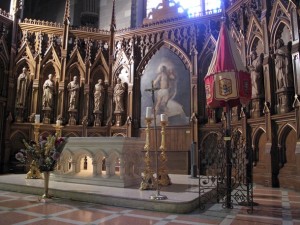 In 2010, the former cathedral was raised to the dignity of minor basilica, the 67th church in the country to receive the honour. Today, the Basilica of St. Patrick’s Old Cathedral serves people in downtown Manhattan of various cultures, offering Mass in English, Spanish and Chinese. This year, the church is also celebrating its bicentennial, with Cardinal Dolan presiding in the blessing of the newly restored basilica, to be held on November 22. 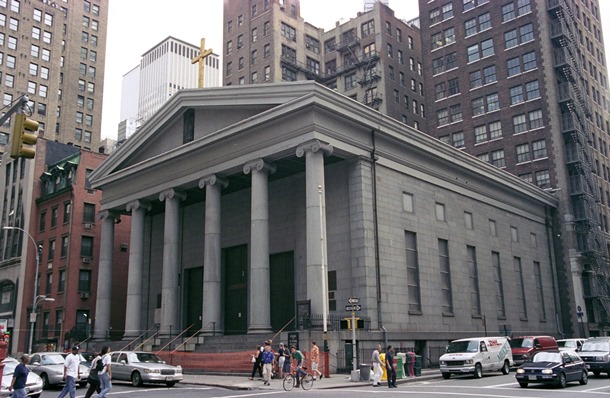 St. Peter’s Church, established in 1785, is the first parish in the New York State before the state was admitted into the United States in 1788. This present church in Greek Revival style, situated in Lower Manhattan, was rebuilt from 1836 to 1840. It was here that St. Elizabeth Ann Seton converted from the Episcopalian Church in 1805. On 11 September 2001, located just 100 metres from the World Trade Center, the roof of the church suffered damage from the landing gear of one of the airplanes that struck the buildings. Fr. Mychal Judge, the Franciscan chaplain for FDNY (New York City Fire Department), was the first publicly identified casualty of the event when debris from the towers hit him. He preached to the firefighters the day before, saying, “No matter how big the call, no matter how small, you have no idea of what God is calling you to do, but God needs you… And this firehouse will be a great blessing to his neighborhood and to this city. Amen.” 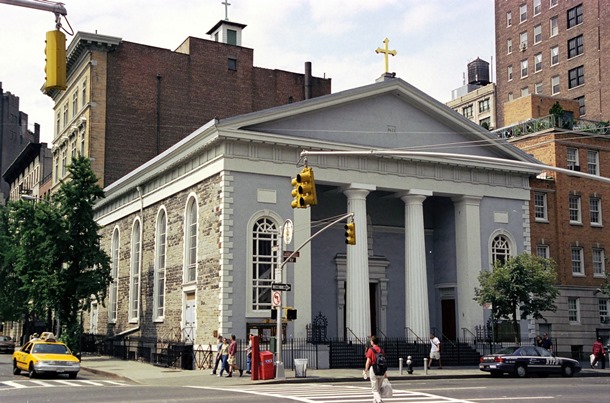 Despite the historicity of St. Peter’s Church (as it was rebuilt in 1840), the Church of St. Joseph in Manhattan claims the title as the oldest church in New York City. As the six parish in Manhattan, its church building was constructed between 1833 to 1834, also in the neoclassical Greek Revival style. The Dominican parish serves many students from the nearby New York University, and has been running a soup kitchen since the 1980s. 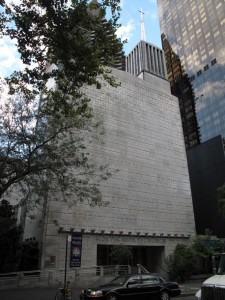 Located within 200 metres of the headquarters of the United Nations, the Church of the Holy Family is popular among diplomats and officials of the extraterritorial jurisdiction. With the modern style in mind, the church was meant for the new liturgy and a spirit of ecumenism. On 4 October 1965, the church proudly received Pope Paul VI in an ecumenical meeting. This is also the first time that a Roman Pontiff visited a non-cathedral church on the American continent. 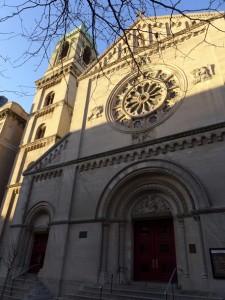 The German Parish of St. Joseph, Yorkville, had its origin in 1873, at first served by the Jesuits. A new church was built in 1895 to accommodate the growing parish community. After Vatican II, many elaborate furnishings were unfortunately discarded, until the 1990’s when the interior was restored and refined. It received Pope Benedict XVI on 18 April 2008 for an ecumenical meeting. 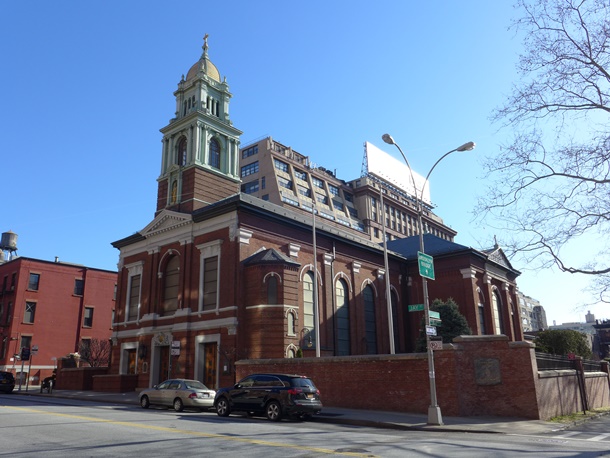 Across the Brooklyn Bridge, St. James, built in 1822, was the first Catholic church on the Long Island. It became the seat of the Diocese of Brooklyn when the see was established in 1853. It lost the cathedral status in 1896 only to regain it in 1972. On 3 October 1979, Pope John Paul II visited the cathedral. Three years later, it was given the status of minor basilica and is now known as the Cathedral Basilica of St. James. 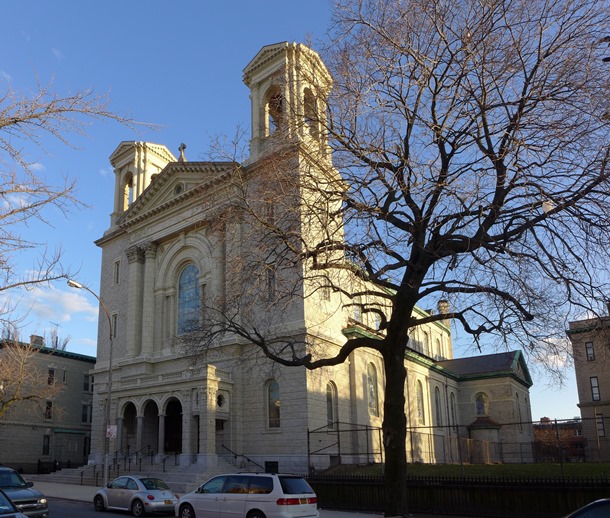 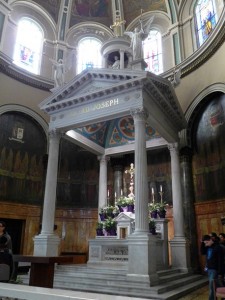 The first St. Joseph’s Church at this site was founded in 1850 to serve new immigrants in the city. It was rebuilt in 1912 in the Spanish Colonial style. When the Cathedral Basilica of St. James is too small to accommodate people for major diocesan liturgies, the Bishop of Brooklyn petitioned the Congregation for Bishops to have St. Joseph’s Church designated as a co-cathedral. The petition was granted in February 2013, and since then, St. Joseph’s Co-Cathedral is the venue for major liturgical events in the diocese. Each diocese can only have one cathedral, the symbol of the unity of the local Church. However, for various historical or practical reasons, some dioceses may have co-cathedrals. A co-cathedral has the privilege of a cathedra (the bishop’s seat) and can host the important pontifical Masses for the bishop. While the anniversary of the dedication of the cathedral is celebrated as a feast throughout the diocese, the co-cathedral does not enjoy such. (Co-cathedrals that were once cathedrals have special privileges of indulgences too.)
[ Cuba --> Washington --> New York City --> Philadelphia ]
Follow live coverage of Pope Francis’ visit to New York City, and later to Philadelphia on your favourite Salt+Light Television. For readers in Canada, do not forget that you can watch Salt+Light Television free of charge through their cable or satellite during the months of September to November this year.   Photos: Gabriel Chow See Also: Chinese Version

Categories:
General Posts
Pope in Cuba and US
Pope in US
Tags:
Churches
NYC