Mary Rose Bacani and Pedro Guevara Mann were present at the Liturgy of the Episcopal Ordination of Bishop William McGrattan Tuesday. They represented Salt + Light Television in bringing up the mitre during the Liturgy at St. Peter’s Cathedral Basilica in London, Ontario. Here is Mary Rose’s account of the emotions of the evening. 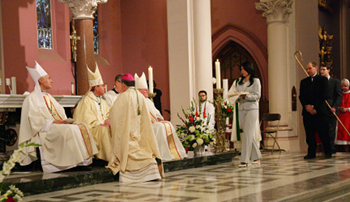 There were so many times I almost broke out in tears (I held them back, of course) as I participated in the liturgy of the Episcopal ordination of Bishop William McGrattan.
I met then Fr. McGrattan in 2004, when Fr. Thomas Rosica introduced us and asked me to produce a series on Moral Theology with him while he was Rector of St. Peter’s Seminary. Fr. McGrattan and I co-hosted and put together the 13-part Salt + Light series Vox Clara. What started as a professional relationship soon turned to friendship. His humility, kindness, thoughtfulness, and especially his holiness drew me to him. Over the years, Salt + Light developed a close relationship with St. Peter’s Seminary, and I visited him many times about an interview or a new project. Our conversations would always turn towards how I am doing and what God is doing with my life. His helpfulness in connecting me with the wonderful priests who now guide me during my private retreats at the Monastery of the contemplative Precious Blood Sisters in London influenced me so much. When I got married over three months ago, Fr. William McGrattan was at my wedding. 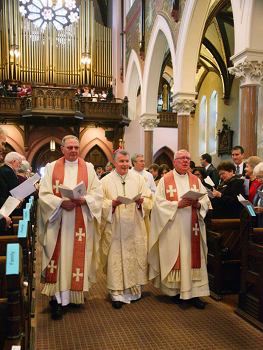 Last night, I felt like I was at his. Only this time, it was more like a celebration, or a deepening, of his relationship with Christ as priest. Last night, Fr. William McGrattan received “the fullness of Christ’s priesthood, having the power and authority to administer all the sacraments, including ordination.” (Source: Catholic Encyclopedia). And I saw at last night’s liturgy and reception that every single person there was there because they had been deeply touched by this man. There were over 1,000 people applauding him, including 35 of his brother priests and bishops, and friends and family. And yet I am almost certain that this appointment is something that will be challenging for such a humble man who avoids the spotlight, who loves having young people around him like the seminarians at St. Peter’s Seminary; he is someone who has served the London diocese and its people well, and loves them very much. He even built up Fr. Vincent Nguyen, who was present and who celebrated his own Episcopal ordination this afternoon, instead of focusing last evening’s event solely on himself.
There were many warm and humorous moments where I saw the camaraderie of all the priests and bishops with the now-Bishop McGrattan.
During his homily, Archbishop Thomas Collins, the Archbishop of Toronto, recalled part of a homily he had once heard. In it, the priest says, “A priest cannot have an identity crisis – the priest has no identity!” Archbishop Collins explained that although this comment is false because everybody has an identity, this statement has some truth because of what lies at the foundation of the identity of a priest. A priest receives his identity from Christ; he is no longer for himself but for the Church. And as a bishop, the priest is called to even greater holiness, to an “Episcopal holiness.”
In his word of thanks to Bishop John Michael Sherlock, Bishop Emeritus of London and co-consecrator during the liturgy, Bishop McGrattan revealed that Bishop Sherlock ordained him as deacon, priest, and now bishop. This is a first for Bishop Sherlock to have ordained the same man three times! And a blessing for Bishop McGrattan who sees Bishop Sherlock as a friend and a mentor of his vocation to the priesthood.
During dinner, Bishop Ronald Fabbro, the Bishop of London, told everybody: “You know why this appointment happened? It’s all YOUR fault!” Bishop Fabbro was trying to say that the people of London brought out the best in Fr. Bill McGrattan, and it is no wonder that his great works had come to the attention of the Apostolic Nunciature and thus, the Vatican.
There were also some moments that revealed very clearly the special man that Bishop McGrattan is.
All the speeches about Bishop McGrattan during the dinner focused on his convictions and character that led to some of his achievements: how his belief in the importance of priestly formation prompted him to start a stellar permanent diaconate program at the Seminary; how his belief in the importance of educating the laity led to his influence in the foundation of The Institute for Catholic Formation; and how his desire to help the Seminary be self-funding resulted in the development of the Foundation and its Board. But throughout the night, he made it clear that the faith life fostered in the home by his deceased parents formed his convictions as a man and a priest. If you can get your hands on a copy of the Ordination issue, number 135, of the Newsletter of the Diocese of London, you’ll find more stories and background information on this new Auxiliary Bishop. It’s a real find! 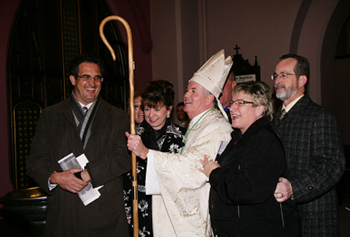 In this Ordination issue, Bishop McGrattan speaks about the special Sundays with the family. Sundays were dedicated to going to Church and doing things around the house, which were accompanied by young William’s discussions with his father on faith and family issues. One time, young William asked his father why he sits behind a pillar at Church and closes his eyes during the homily. His father said that no, he’s not taking a nap, that instead he is focusing on the Word and not on the personality of the priest speaking God’s Word. Bishop McGrattan also spoke of how his father would wake him up for a holy hour on Saturday nights, which left young William with vivid memories of his father in adoration before the Blessed Sacrament in the darkness. His mother had a quieter and yet equally strong a faith. She had her own prayer table with her prayer cards, where she would read quietly, reflecting on the lives of other people and praying for them.
At the dinner, Bishop McGrattan talked about how he realized that because of the faith he had at home, he was able to realize his vocation to the priesthood. Faith starts with family. And that’s why all dioceses must support the family. That’s also why Bishop McGrattan has always been so interested in the formation of lay people and the priests who administer the sacraments to them.
I was able to go home with a wonderful keepsake – Bishop McGrattan’s ordination card. The image on his ordination card is from the Gospel text he had chosen of Peter walking on the water towards Jesus. The scripture text on the back of the card reads:

… but he has said, ‘My grace is enough for you; my power is at its best in weakness.’ So I shall be very happy to make my weaknesses my special boast so that the power of Christ may stay over me, and that is why I am quite content with my weaknesses, and with insults, hardships, persecution, and the agonies I go through for Christ’s sake. For it is when I am weak that I am strong. (2 Corinthians 12: 9-10)

This ordination card contains Bishop McGrattan’s prayer that God be with him and work through him despite his weaknesses as a man. With such humility and wisdom, how could God refuse?
Congratulations on your ordination, Bishop William McGrattan.
Know that the whole Church prays for you and follows you with joy and support as you begin your Episcopal ministry!
-
Photos by: Jackie Noble for the Diocese of London