The annual meeting of the Canadian bishops has come to a close. And just in time—the bishops are leaving Cornwall, Ontario for nearby Montreal to celebrate the Mass of Thanksgiving for the canonization of Brother André. (S+L will broadcast the Mass live in French at 1:30 pm ET, repeating in English at 9:30 pm ET.) 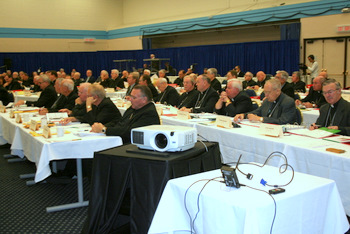 The Canadian Conference of Catholic Bishops (CCCB) tackled an ambitious array of issues in Cornwall. Central among them was the New Evangelization, which refers to efforts to revive religious practice in traditionally Christian cultures. The theme was highlighted by two addresses by Archbishop Gianfranco Ravasi, the president of the Pontifical Council for Culture. A rising star in the Vatican, Archbishop Ravasi is among 24 bishops who will be elevated to the rank of Cardinal next month. The episcopal conference also sent a strong message that it wants to prioritize pro-life and family issues. “The Bishops need to exercise real leadership on questions of life and family,” said Bishop Ronald Fabbro, CSB of London, Ontario, according to a CCCB statement. “These questions require a spiritual revival, a change of hearts.” The nation’s bishops voted to extend by one year the mandate of the Ad Hoc Committee for Life and Family. Bishop Fabbro has chaired the committee since its creation at the 2009 plenary assembly. The CCCB calls the extension “a clear signal of their commitment”, which will allow the committee to develop a “concrete plan for future action”. 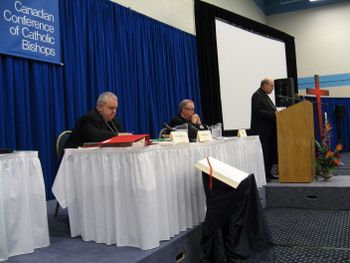 Another follow-up from last year’s meeting involves the future of the Development and Peace (CCODP), the international development agency of the Catholic Church in Canada. In 2009, the CCCB formed an Ad Hoc Committee to work with D&P to “revis[e] its mandate and operational principles”. The initiative followed reports that CCODP was funding projects led by controversial partner agencies. Organizations in a number of countries were accused of promoting positions contrary to Church teaching, such as the legalization of abortion. The charges did not pertain specifically to the projects funded by CCODP, but to other advocacy work done by the partner agencies. The CCCB investigated allegations involving five such groups in Mexico. They concluded that the charges were “unfounded” and declared that CCODP was “cleared of suspicion”. Nevertheless, the bishops and CCODP launched a joint process of “renewal” for the organization, to be guided by the Pope’s social encyclical Caritas in Veritate. Today the CCCB announced the evolution of the Ad Hoc Committee into a new Standing Committee. That committee, the bishops explained, will allow the bishops and Development and Peace to "share information and collaborate more closely" in view of their common goal of "help[ing] the world’s most vulnerable persons.” The bishops are promising a more detailed report before the end of next week. That report will elaborate on both the work of the previous committee and the duties of the new body. - Photo credit: CCN / Deborah Gyapong