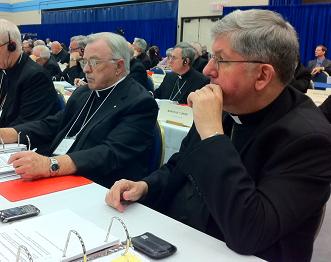 S+L's live coverage of the Canadian bishops' annual gathering continues this morning. We begin with Lauds and Mass at 7:30am ET / 4:30am PT. Today the liturgy will be celebrated in French.
At 9:30am ET / 6:30am PT, our live broadcast resumes with the second of two addresses by the keynote speaker, Archbishop Robert Le Gall of Toulouse, France. While yesterday the theme was Sacramentum Caritatis, today he will be reflecting on Pope Benedict's Post-Synodal Apostolic Exhortation on the Word of God, titled Verbum Domini. The English translation of the Archbishop's address in French will immediately follow at 10:30am ET / 7:30am PT. Another highlight of day two will be the elections of the new CCCB leadership. Given the tradition that the Vice President usually succeeds the President, Archbishop Richard Smith of Edmonton is widely expected to be voted into the top position. The new Vice President and the Co-treasurers for the English and French sectors will also be appointed today. All of these events can be viewed online on the S+L website. For our full schedule for the week, see the special CCCB Plenary Assembly webpage, where the televised events are also streaming on demand.