Catholic Focus: Troubadour for the Lord 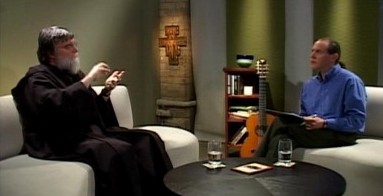 I’m not sure when it was that I heard my first John Michael Talbot song. Perhaps it was one of the songs we sang at Mass one day. I do remember when I was part of the 5:15 Saturday Music Group at Our Lady of Lourdes Parish in Toronto, we were quite the JMT fans. I remember that he had a concert in Toronto, and I missed it. My friend Amy made me a John Michael Talbot tape (remember when we made tapes?).When I was Artistic Director of WYD2002, I was invited to the Catholic Association of Musicians annual conference. It was a great place to meet Catholic artists and to spread the WYD message to them, inviting them to apply to the Youth Festival. Turns out that the Founder of C.A.M. is John Michael Talbot and that year, was John’s 25th anniversary and the meeting was at his Hermitage and Retreat Center in Arkansas. So there I went.Before I continue, in case you’ve never heard of John Michael Talbot; He is the top selling Catholic artist in the world, having received eight Dove award nominations and one Dove award. He has produced 46 albums, over four million records sold. He is also an acclaimed lecturer, teacher, and retreat master.I will never forget that anniversary concert. In many ways it shaped my WYD plans. Let me explain: As part of the anniversary, John would play a concert for all C.A.M. members attending, and would be joined on stage by his brother Terry Talbot (formerly of the band Mason Proffit), Barry Mcguire, and Phil Keaggy. What a spectacular and unique combination!After Terry, Barry and Phil played, John came on stage. He sat down to play. Let me note that we were in the middle of the most spectacular Fall storm. The concert venue was a Pentecostal Church, with huge floor-ceiling windows behind the stage area. Behind the musicians was a wonderful lightning show over the Arkansas' Ozark Mountains.About halfway through John’s second song, the power went out. John continued playing. Someone in the audience had a flashlight and he turned it on, pointing it towards the stage. The storm continued. The music continued. You could hear a pin drop. It turned out to be the most spectacular, spiritual concerts I have ever been to. I left Arkansas knowing without a doubt that sound systems and power supplies are irrelevant in doing the Lord’s work. All you need is to show up and do your thing. The rest will come.We spent those three days in wonderful community – celebrating Mass every day, with some 50 musicians from across Canada and the U.S., learning and dialoguing about music ministry and evangelism. It was at that meeting that I met many of the Catholic Musicians I now call friends: Sal Solo, Tony Melendez, Susan Hookong-Taylor and David Wang. I have very fond memories of that particular visit to the hermitage of the Brothers and Sisters of Charity.Let me explain again: John Michael is not just a musician. He is also the founder and General Minister of the Brothers and Sisters of Charity, the only integrated monastic community with canonical approval by the Catholic Church in America. The community is largely self-supporting, growing much of its own food, catching fish from a lake on the 250-acre property, and raising farm animals. It also sells its organically grown produce locally. Local ministries include Little Portion Hermitage Monastery, the Little Portion Retreat and Training Center at More Mountain, the Little Flower Family Health Clinic and Counselling Center, serving the needy in the community.Needless to say that for WYD2002, we invited John Michael to come to the Youth Festival, and also to sing his Magnificat, “Holy is His Name” for the Evening Prayer and Vigil with Pope John Paul II on the Saturday night. It remains, for me and for many, one of the highlights of the week-long event.

Fast-forward 6 years: At approximately 12:00am on Tuesday, April 29, 2008, the Little Portion Hermitage suffered a terrible fire. The fire began in their completely wooden (and beautiful) Charity Chapel, and quickly spread through a covered walkway to the Common Center, a building housing the main dining and meeting rooms, offices and library. Both structures were totally lost. Thankfully no one was hurt. Later John told me that they lost the two physical hearts of the Community: the Chapel (spiritual) and the Common Centre (social).The Community has now to do what so many communities have done in the past: Rebuild. In many ways, the physical rebuilding will in some way shape the spiritual direction that the community will take from now on.A month after the fire, after almost a month of touring in Alberta and Saskatchewan, John Michael joined us in Toronto for the 2008 Catholic Media Convention where he offered a concert to all the participants. Of course, that visit included some time in our Catholic Focus studio. This interview will air on Thursday, September 25th at 7 and 11pm ET, with an encore presentation on Sunday, September 28th at the same times.The Brothers and Sisters of Charity at Little Portion Hermitage have received many kind donations to help with the rebuilding process. Right now they have enough money to begin and nearly finish, but they will need much more. Building a monastery that will last a lifetime, and withstand another fire can cost several hundred thousand dollars. If you would like to help, visit http://www.troubadourforthelord.com/scripts or mail your donations to Little Portion Hermitage, 350 CR 248, Berryville AR, 72616, U.S.A.Let me know your thoughts – always love to hear from you.Pedro