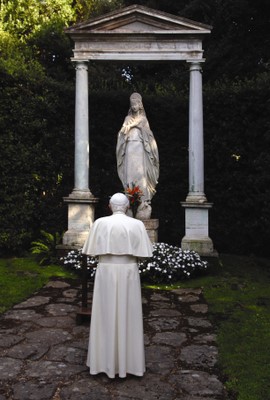 Just before Christmas a British record label released a CD called Alma Mater. The CD features clips of Pope Benedict himself speaking at various events. Those clips of Pope Benedict were woven into beautiful pieces of Gregorian chant, sung by the Philharmonic Academy of Rome, accompanied by the London Philharmonic Orchestra. No small task considering one is based in Rome, the other in London, and each needed to be recorded in different places in order to get their optimum sound.
My first question was "How did they get Pope Benedict to record a CD?" followed by "Gregorian Chant? does anyone do that anymore?" I did some digging and discovered that, yes, people do still sing Gregorian Chant. I found a Canadian choral group that performs Gregorian chant, polyphonic music, some palestrina, and some specially composed "modern classical" pieces. I talked to the women of Toronto's Schola Magdalena Choir about why they love singing this medieval music, either as part of a liturgy or on it's own in special performances. After talking to the Schola Magdalena I was almost tempted to join one of their larger, non-professional choirs myself! Catch our newest Focus episode this Wednesday to find out how the Alma Mater CD came together and why so many people, like the women of Schola Magdalena, are drawn to Gregorian Chant. Catholic Focus: Alma Mater -- Singing Praise airs Wednesday January 13th at 7pm ET/8pm PT with an encore presentation Sunday, January 17th at the same times.