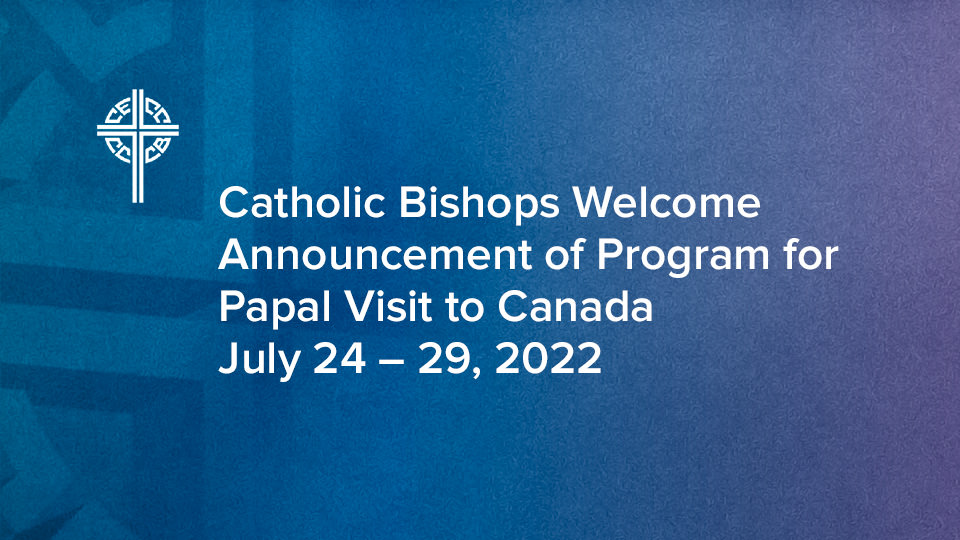 The following is a statement issued by the Canadian Conference of Catholic Bishops (CCCB). It gives further details of Pope Francis' upcoming visit to Canada, which is scheduled to take place July 24-29, 2022, in Edmonton, Quebec City, and Iqaluit.

Canada’s Catholic Bishops welcome today’s announcement from the Holy See providing further details of the itinerary of Pope Francis’ historic visit to Canada, July 24 – 29, 2022. This will be the fourth papal visit to Canada and the first since Saint John Paul II’s journey in 2002. The Holy Father’s pilgrimage will focus on Indigenous healing and reconciliation while also providing the shepherd of the world’s 1.2 billion Catholics an opportunity to encounter the faithful in Canada. Due to his advanced age and limitations, it is expected that participation by Pope Francis at public events will be limited to approximately one hour. General Co-ordinator of the Papal Visit to Canada, Archbishop Richard Smith, remarked on the release of the program: “We know that the Holy Father was deeply moved by his encounter with Indigenous Peoples in Rome earlier this year, and that he hopes to build on the important dialogue that took place. We pray this pilgrimage will serve as another meaningful step in the long journey of healing, reconciliation and hope.” The visit, drawing on the theme of “Walking Together”, will include a combination of public and private events, with an emphasis on Indigenous participation throughout the visit. Ticketing (free) for public events will be  announced in the coming days. A volunteer portal can be accessed at papalvisit.ca or visitepapale.ca for those wishing to share their time and talents as part of the historic visit. The papal visit planning team will work closely with Indigenous partners as well as federal, provincial and municipal levels of government to dialogue and co-ordinate the significant logistical challenges associated with a visit of this scope and magnitude. Canadian Conference of Catholic Bishops President, Bishop Raymond Poisson, commented on the efforts: “So many people are working diligently to organize this very busy schedule for the Holy Father and participants. We pray for the health of Pope Francis and also that his pastoral visit to Canada will bring reconciliation and hope to all those who will accompany our shepherd on this historic journey.” Those interested in learning more about the Papal Visit to Canada can find the latest updates at: www.papalvisit.ca (English) and www.visitepapale.ca (French). Highlights of the program announced by the Vatican include: July 24, 2022 The Holy Father will arrive in Edmonton, Alberta on July 24th. Following a brief airport ceremony, the 85-year-old pontiff will take the remainder of the day to rest. July 25, 2022 On July 25th, Pope Francis will visit Maskwacis, home to the former Ermineskin Residential School, one of the largest residential school sites in Canada. The Holy Father will join former residential school students from across the country as part of a formal program. Alberta is home to the largest number of former residential schools in Canada. Later in the day, the pontiff will visit Sacred Heart Church of the First Peoples, a National Indigenous church in downtown Edmonton. Following extensive restoration after a devastating fire in 2020, the parish will re-open its doors after using a nearby school the last several years to offer hospitality, spiritual care and supportive outreach programs serving a diverse urban Indigenous community. This will be an invitation-only event. July 26, 2022 July 26th is the feast of St. Anne, grandmother of Jesus, a day of particular reverence for Indigenous Catholics and often the focus of pilgrimage in various parts of the country. In an event that will be open to the public, the Holy Father will celebrate an open-air Mass at Commonwealth Stadium in Edmonton. The facility can accommodate up to 65,000 attendees for a program that will incorporate Indigenous traditions as part of the gathering. In the early evening, the Holy Father will travel to Lac Ste. Anne, the site of an annual pilgrimage that welcomes tens of thousands of Indigenous participants from throughout Canada and the United States each year. Programming will be offered throughout the day leading up to the Holy Father’s participation in a prayer service. July 27, 2022 The Holy Father will depart Edmonton for Quebec City. Upon arrival, the Pontiff will visit La Citadelle, where he will take part in private meetings. Pope Francis, as both a spiritual leader and head of state, will also offer a public address. For events in Quebec City, the public is also invited to participate at a dedicated area on the Plains of Abraham, where there will be opportunities on July 27 and 28 for Indigenous cultural expression as well as the chance to view papal events on large screens. The detailed program of activities on the Plains is being developed with Indigenous and community partners. July 28, 2022 Pope Francis will travel to Sainte-Anne-de-Beaupré, where he will celebrate Mass at one of the oldest and most popular pilgrimage sites in North America, drawing more than a million visitors to the site (including annual Indigenous pilgrimages) each year. Organizers anticipate between 10,000 and 15,000 guests may attend with space for guests both inside and outside the basilica. Later in the day, His Holiness will meet with bishops, priests, seminarians, consecrated men and women as well as those who work in various church ministries, as is customary with most papal visits. The pope will have the remainder of the evening for rest while a dinner focused on friendship and ongoing dialogue will bring together Indigenous leaders from Eastern Canada and representatives of the Catholic Bishops of Canada. July 29, 2022 Following a private meeting with members of his own religious order (Society of Jesus), Pope Francis will meet with Indigenous leaders from Eastern Canada before departing for Iqaluit, where he will spend the afternoon in a private meeting with residential school survivors before attending a public community event hosted by Inuit. The Holy Father will depart for Rome from Iqaluit in the early evening.