Cardinal Marc Ouellet has asked the faithful to pray that the Lord may give him “wisdom and discernment” as he heads to Rome. 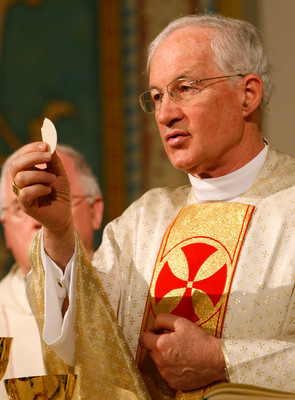 That’s where, as of August 24th, he’ll take up his new role as the prefect of the Congregation for Bishops. He asked for the prayers yesterday at the St. Anne de Beaupre Basilica, where he celebrated his last official Mass as Archbishop of Quebec. The Cardinal says he is grateful for the eight years he spent as Archbishop and says he will continue to pray for the Church in Quebec. The prelate has also asked for forgiveness for any hurt he may have caused in his time among the people. He says that the message of truth often causes suffering for both the giver and receiver of the message. But, added "God himself shows us that suffering can be a source of life." You can catch a presentation of the farewell Mass, in French, on Salt + Light Television Tuesday August 17th at 3:30pm ET. - Photo: Cardinal Ouellet celebrates Mass at St. Paul's Basilica in Toronto in 2008.  CNS photo/Nancy Wiechec