Cardinal Levada in Kingston: Visible union "does not mean absorption into a monolith" 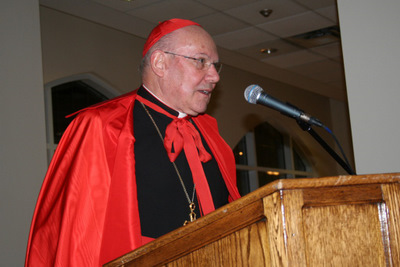 Visible union with the Catholic Church does not mean absorption into a monolith, with the absorbed body being lost to the greater whole, the way a teaspoon of sugar would be lost if dissolved in a gallon of coffee. Rather, visible union with the Catholic Church can be compared to an orchestral ensemble. Some instruments can play all the notes, like a piano. There is no note that a piano has that a violin or a harp or a flute or a tuba does not have. But when all these instruments play the notes that the piano has, the notes are enriched and enhanced. The result is symphonic, full communion. One can perhaps say that the ecumenical movement wishes to move from cacophony to symphony, with all playing the same notes of doctrinal clarity, the same euphonic chords of sanctifying activity, observing the rhythm of Christian conduct in charity, and filling the world with the beautiful and inviting sound of the Word of God. While the other instruments may tune themselves according to the piano, when playing in concert there is no mistaking them for the piano. It is God’s will that those to whom the Word of God is addressed, the world, that is, should hear one pleasing melody made splendid by the contributions of many different instruments.

The address on Anglicanorum Coetibus, the apostolic constitution mandating a structure for Anglicans groups joining the Catholic Church, is significant given that these "personal ordinariates" will be erected by and subject to the Congregation for the Doctrine of the Faith, which Cardinal Levada leads as prefect. As reported by Deborah Gyapong on the Anglo-Catholic blog, the event also occasioned the first meeting between the Cardinal and the primate of the Traditional Anglican Communion, Archbishop John Hepworth. Earlier in the day, the Vatican Cardinal celebrated the Eucharist with students in a packed chapel at the Queen's University Newman Centre. He then enjoyed a private lunch with media and evangelization leaders (that I was honored to attend), hosted by the Centre for Cultural Renewal. The full transcript of the March 6th lecture will be posted here later today. Note that the prefect will be celebrating Mass this afternoon at Ottawa's Notre Dame Cathedral at 4:30 pm. Following this, he will deliver the keynote address at the Catholic Christian Outreach fundraising gala on the topic, "The Catholic Faith: Why Is It Worth Passing On?". S+L is filming the Mass in Notre Dame, which will be broadcast Thursday, March 11th at 8:30pm ET and 9:30pm PT. - Photo credit: Deborah Gyapong / Canadian Catholic News