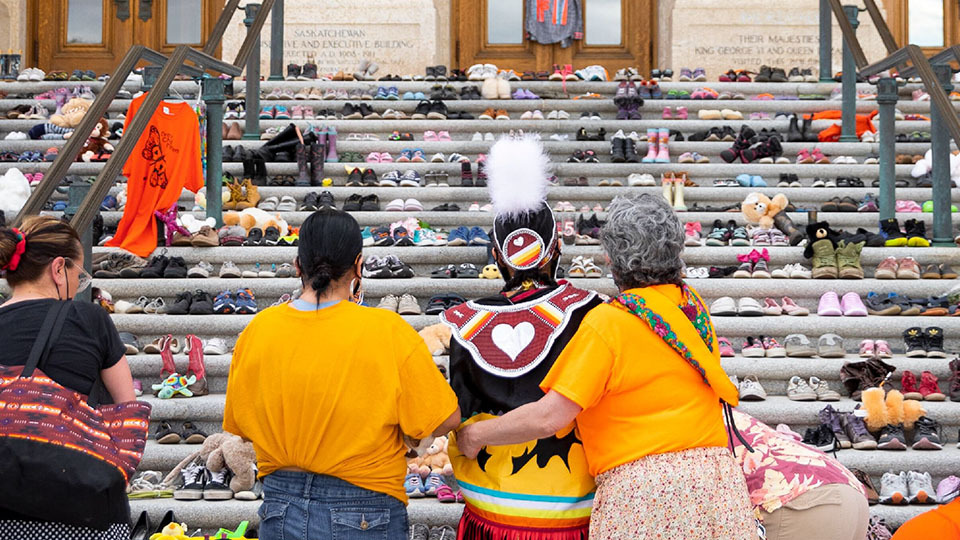 The discovery of 215 unmarked graves at the site of the former Kamloops Indian Residential School in 2021 has increased awareness across Canada of the suffering experienced by Indigenous peoples as a result of the residential schools. The use of children's shoes in memorials across Canada was initiated by Haida artist Tamara Bell, who placed 215 shoes on the steps of the Vancouver Art Gallery in May 2021. Photo by Tandem X Visuals on Unsplash

The following statement by the Canadian Conference of Catholic Bishops (CCCB) was released on Wednesday, October 27, 2021. Call to Action #58 of the Truth and Reconciliation Commission of Canada (TRC) states: "We call upon the Pope to issue an apology to Survivors, their families, and communities for the Roman Catholic Church’s role in the spiritual, cultural, emotional, physical, and sexual abuse of First Nations, Inuit, and Métis children in Catholic-run residential schools. We call for that apology to be similar to the 2010 apology issued to Irish victims of abuse and to occur within one year of the issuing of this Report and to be delivered by the Pope in Canada." To learn more about the TRC and Catholic involvement in residential schools, visit the website of the National Centre for Truth and Reconciliation.

Canadian Bishops to Welcome Pope Francis to Canada on Historic Pilgrimage of Healing and Reconciliation OTTAWA, October 27, 2021 – The Catholic Bishops of Canada are grateful that Pope Francis has accepted their invitation to visit Canada on a pilgrimage of healing and reconciliation. The Holy Father’s full statement on the matter can be found here. In anticipation of this visit, the planned delegation of Indigenous survivors, Elders, knowledge keepers and youth will travel to the Holy See, where they will have the opportunity to speak to Pope Francis about the timing, focus, and themes in preparation for his future pilgrimage to Canada. “The Bishops of Canada have been engaged in meaningful discussions with Indigenous Peoples, especially those affected by Residential Schools who have shared stories about the suffering and challenges that they continue to experience,” said CCCB President, the Most Rev. Raymond Poisson. “We pray that Pope Francis’ visit to Canada will be a significant milestone in the journey toward reconciliation and healing.” The Canadian Bishops recently pledged to work with the Holy See and Indigenous partners on the possibility of a pastoral visit to Canada by the Pope. Following this pledge and informed by three years of ongoing dialogue between the Canadian Bishops, the Holy See, and Indigenous Peoples, the President and former-President of the CCCB met in Rome with the Secretary of State of the Holy See to discuss next steps on the reconciliation journey earlier this month and in preparation for the delegation. This delegation to the Holy See will take place from December 17-20, 2021, and is being planned in close collaboration with National Indigenous Organizations and other partners. “We will invite the delegation of Indigenous survivors, Elders, knowledge keepers, and youth who will meet with Pope Francis to open their hearts to the Holy Father and share both their suffering as well as their hopes and desires for his eventual visit to Canada,” added Bishop Poisson. Additional details about Pope Francis’ pilgrimage to Canada, as well as the Rome delegation will be announced by the CCCB as details are confirmed.   About the Canadian Conference of Catholic Bishops The Canadian Conference of Catholic Bishops (CCCB) is the national assembly of the Bishops of Canada. It was founded in 1943 and officially recognized by the Holy See in 1948.