Doors Open Toronto, which took place a couple of weekends ago, opened my eyes to the city I live in. 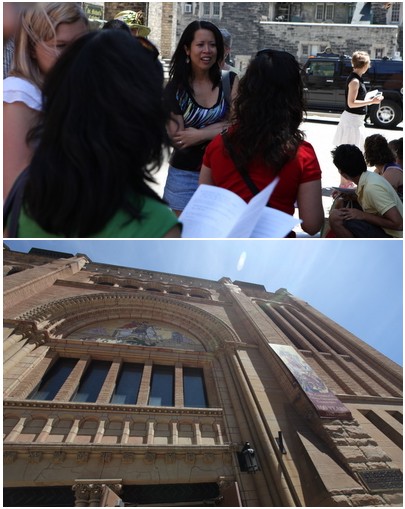 Doors Open Toronto is an annual event in which the City of Toronto opens the doors of at least 150 of its buildings of architectural, social, or historical significance.  These are buildings you usually can’t go into, or can’t afford to go into.  Well, on this weekend of the year, they’re open and they’re free! Faith Connections, a ministry of the Sisters of St. Joseph in Toronto, jumped on this initiative with their own initiative:  they invited young adults to participate in Doors Open Toronto with them.  Vanessa Nicholas-Schmidt, Assistant Director for Faith Connections, chose a few buildings that the group would go to and reflect.  So, on the day of the “Hike & Prayer”, on Saturday, May 29th, I joined them. The Adventure Begins Around 30 of us met up in front of St. Michael's Cathedral at 1:30 pm.  Faces of all ages and backgrounds, some whom I remember from the Busy Person's Retreat earlier this year, greeted me warmly.  Some had an “exotic” story.  Three American girls came from Detroit to visit a friend for the Memorial Day weekend.  They searched the internet for what's going on, and decided to spend the day with  us! Our “Hike and Prayer” program highlighted six places to visit, including the Ontario Heritage Centre and Regis College.  At each spot, we were to ask ourselves:  “Did this space evoke a sense of the Sacred?  Why or why not?” The place that really stayed with me was the first location -- St. George Greek Orthodox Church. Faith in colour Outside, it looks like an ordinary building.  Inside, it is a wonder of colour, history, and art.  This is St. George's Greek Orthodox Church on 115 Bond Street.  The vividness of the colours inside this Orthodox church is awe-inspiring.  The iconography is the story of faith written in colour, an exposition of theology through art. When the tour was over, we reflected on what we saw.  We were touched by how this place was so God-centered in every way.  Also, the reverence for Mary in a few Marian icons was so apparent.  Our tour guide told us: “She is considered wider than the heavens because she contained in her womb what even the heavens could not contain.” Reflecting on our heritage In his address during the Evening Vigil with Young People at Downview Park for World Youth Day 2002, Pope John Paul II encouraged us to be builders.  We must build a civilization of love, brick by brick, within the city of man.  I learned on Saturday that each of us is a builder on a spiritual level.  And we should also pray for the people who build such wonderful works of art in our city.  May each building they work on embody something of God.