Br. André on the Web 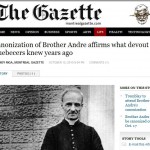 On the eve of Br. André’s canonization, cyberspace is swarming with articles related to the event. In addition to Internet-based news media and blogs, groups and individuals will surely contribute to the online fray. On several occasions in the upcoming days, this blog will share some interesting links on what others around the world are saying about this much-loved Canadian saint. Here are two examples. - “What would Brother André think of the large pictures of his likeness on billboards around the city, and of the canonization itself, which in Montreal will culminate with a mass at the Olympic Stadium on October 30 that could attract 50,000 people?” asked Andy Riga from The Gazette. “I think he would be uncomfortable with it," answered Micheline Lachance, author of a biography of Brother André. - The University of Notre Dame announces that a delegation of this prestigious institution will attend the celebrations in Rome. The Observer, a newspaper published on campus, reminds readers that Brother André is the first saint of the Congregation of Holy Cross.