Blessed Luigi Maria Palazzolo: Friend of the poor and abandoned 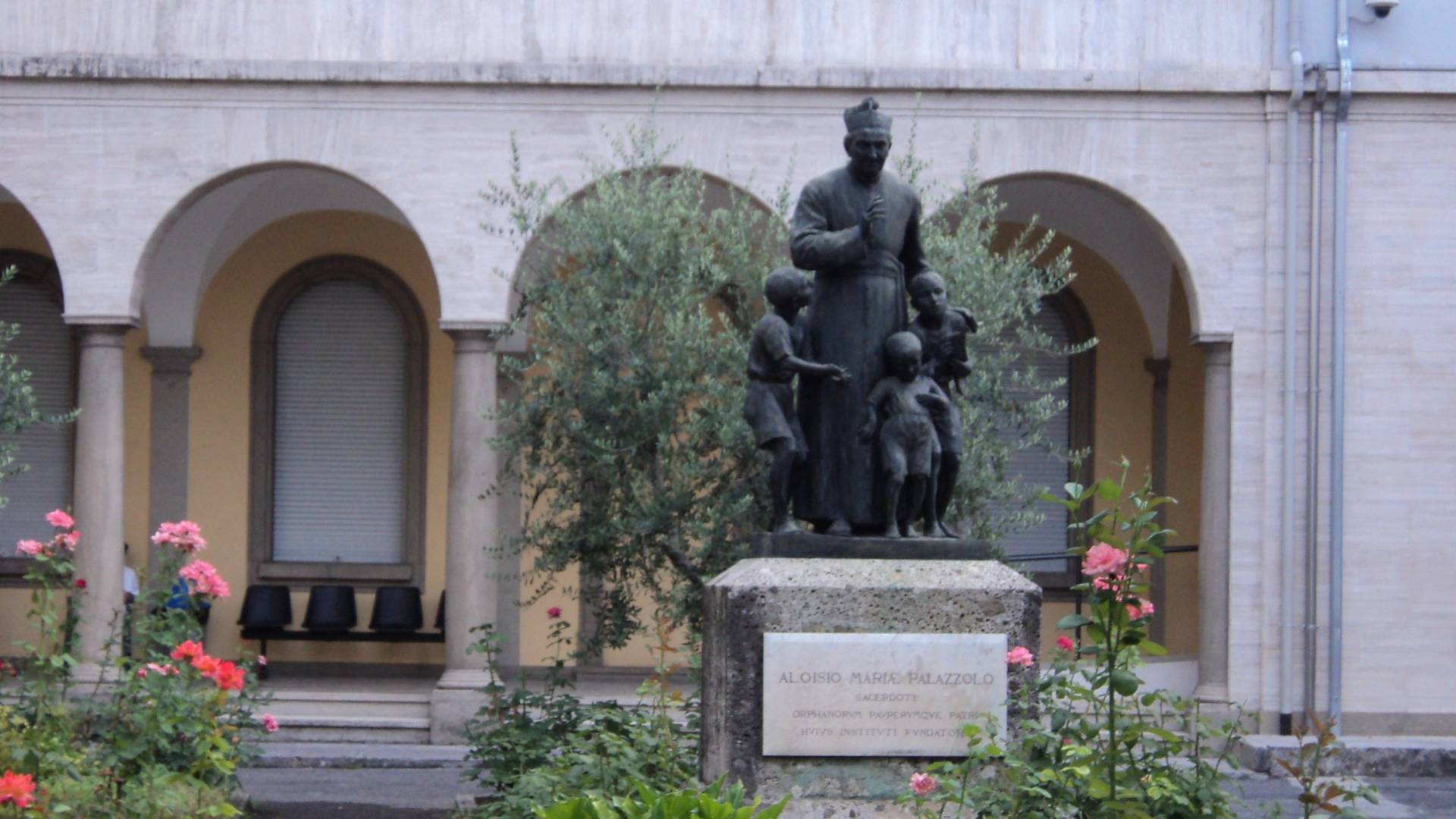 Statue of Luigi Maria Palazzolo on the grounds of the Palazzolo Institute in Bergamo, Italy. Photo credit: Gio la Gamb, cropped and used under the terms of licence CC BY-SA 3.0
Early life Luigi Maria Palazzolo was born in Bergamo in the north of Italy on December 10, 1827. Although his family was well off, Luigi’s early life was not without its hardships. The youngest of several boys (sources disagree on whether they were 8 or 9 in total), he was the only one to live to adulthood, and at the age of ten, he was left without a father. His mother, a good, devout woman, saw to his education and instilled in him an understanding of the importance of charity towards the poor.   Naked on the cross Always sensitive to the needs of the poor, after his ordination in 1850, Luigi’s life became one entirely dedicated to them – especially to abandoned children. His heart was moved by the plight of the poor boys he encountered in the streets of Bergamo. Taking over the running of a men’s oratory in one of the poorest parts of town, he placed himself amongst them, seeing to their care and education – and even their entertainment, putting on puppet shows for them. (In fact, many of these puppets are still in existence and can be seen, recently restored, in the Palazzolo Museum in Bergamo.) Later, when he realized that there was an equal need for the care and education of girls and young women, he began to help them, too, with a house for the poor and orphans and a women’s oratory. In 1869, together with Teresa Gabrieli, he founded the Sisters of the Poor to carry out this work. That same year, while on a retreat in Rome, he received a profound calling not only to serve the poor but to become one of them – to become like Jesus, who died naked on the cross. Luigi Maria Palazzolo died on June 15, 1886. In 1963, he was beatified by Pope John XXIII, a fellow son of Bergamo.   A legacy of service Blessed Luigi Palazzolo was an ordinary man, an ordinary priest, whose holiness lay in his extraordinary openness to the movement of the Holy Spirit, responding unhesitatingly to needs as he encountered them, devoting his whole life to those who had been cast aside by others and for whom there was no other help. This personal charism continues today in the order he founded: the Sisters of the Poor. Serving in Italy, the Democratic Republic of Congo, Ivory Coast, Burkina Faso, Malawi, Kenya, Brazil, and Peru, they continue to devote their energy and resources to children and to the poor, but they also adapt to changing and emerging needs, going wherever they are needed – especially if, for whatever reason, no one else has yet stepped in to fill that need. When a frightening new virus appeared in Italy in 2020, devastating the city of Bergamo, the sisters were on the frontlines, treating patients and working together with other hospitals to manage the crisis. By late March, 13 Sisters of the Poor had died of COVID-19 in Bergamo. And among their sisters, they are not alone in their heroic devotion to the sick. In 1995, Sisters of the Poor serving in Kikwit, Zaire (now the Democratic Republic of Congo), found themselves at the epicentre of an outbreak of the horrific Ebola virus. True to their charism, they stepped into the need with courage and love. The six sisters who died were recognized for their heroic virtue in 2021 and so are one step further along the path to canonization.   Miracle It is appropriate, then, that the miracle needed for Luigi Palazzolo’s canonization was granted to one of his own. Sr. Gianmarisa Perani was brought to hospital in November 2015 in very serious condition. She received an operation and was discharged to a nursing home with no expectation that she would recover. Sr. Gianmarisa and those around her entrusted her case to the care of their blessed founder. In January 2016, seeing that the sister was now close to death, her doctor ordered her treatment to be stopped. However, a little while later, when a nurse came to check on her, she suddenly woke from her comatose state and quickly became healthy again.   Possible patronage Of course St. Luigi Maria Palazzolo will be an appropriate and effective patron for the Sisters of the Poor, but he can have a broader appeal, too. For anyone who feels abandoned by society and in any situation where necessary help is despaired of, I am certain that an appeal to the intercession of this saint will not go unheard or unanswered. And it would be appropriate, too, if he could become, along with St. Simeon Salus, a patron saint of puppeteers and anyone who uses playful means to educate and catechize.