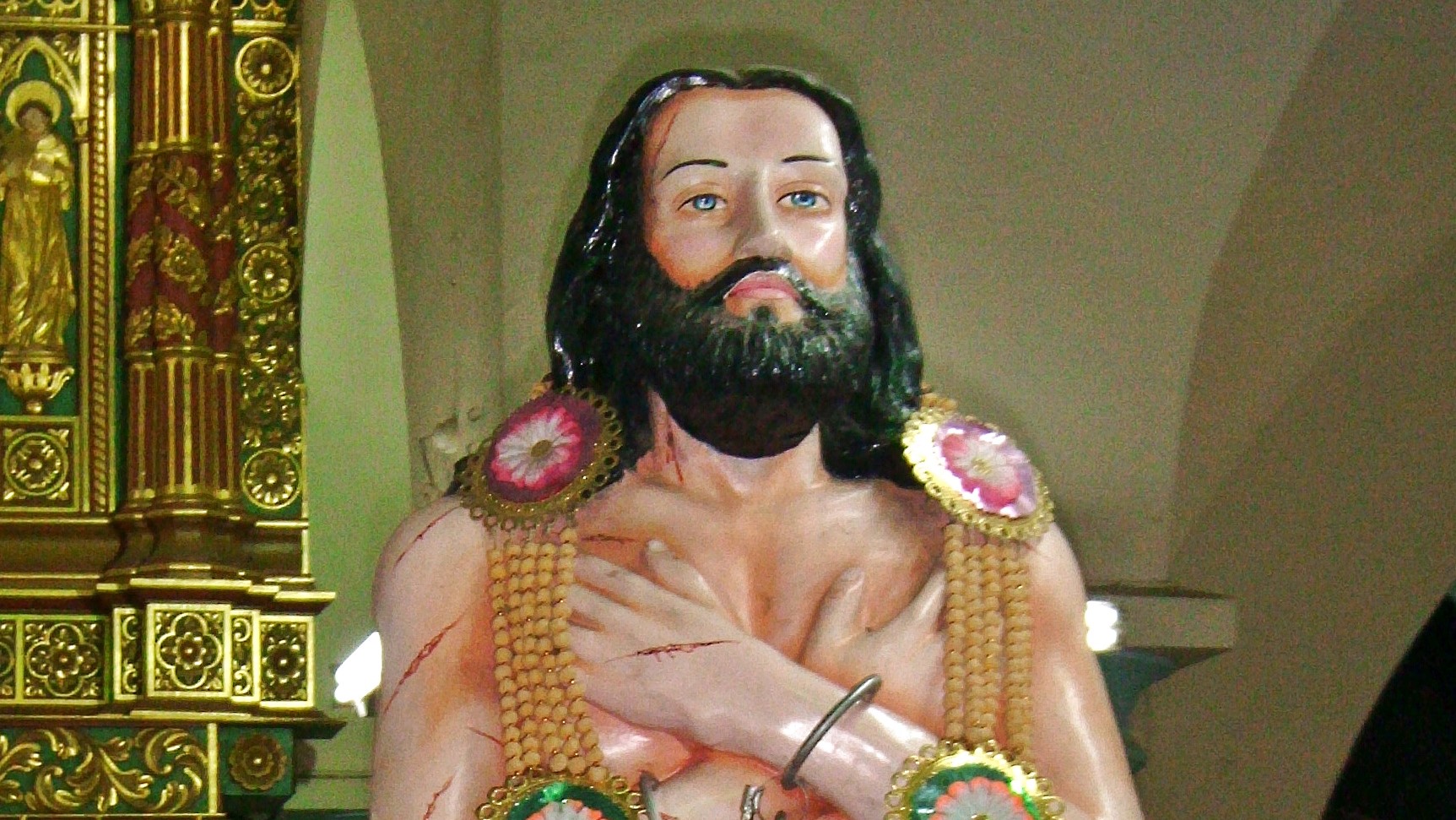 Statue of Devasahayam Pillai in St. Francis Xavier Cathedral in the city of Nagercoil, India. Photo credit: Kumbalam, cropped and used under terms of licence CC BY-SA 3.0
In the coming days, the Catholic Church in India will witness a momentous occasion: the canonization of Blessed Devasahayam, the very first layperson, martyr, and married person in India to be canonized as a saint. Being a Hindu, he was already in a highly regarded position in the caste system, so why did he decide to throw it all away to become Catholic?   Going from Pillai to “poor for the sake of the poor” On April 23, 1712, Devasahayam was born in the present-day Indian state of Tamil Nadu. Being born into the Hindu religion, he was named Neelakanda Pillai. Pillai or Pillay means “Prince” in Tamil culture, which is a highly regarded title in the caste system. He served in the royal service and was favoured by King Marthanda Varma, ruler of Travancore at the time. With an upper-caste title and approval from the king, it seemed like Neelakanda Pillai had everything – that is, until he lost it all after several bad seasons. Going from having everything to having nothing, in the eyes of society, it would seem that life was over for him. Seeing this, Captain Eustachius De Lannoy, a Dutch official, consoled him and introduced him to the Book of Job. It was here that Neelakanda realized the meaning of suffering: here was someone who, like him, had everything and then lost it all – but what was unique was that, despite all his suffering, Job stayed faithful to God. In 1745, Neelakanda was baptized and took the name “Devasahayam”, which is the Tamil translation of “Lazarus”, or “God is my help”.   Hitting rock bottom, martyrdom, and miracles  Devasahayam’s conversion maddened the King of Tranvancore and other Hindus, so in 1749 he was tortured, imprisoned, and banished to a forest for three years. Beaten and tortured daily and given impotable water to drink, he wept in prayer and, hitting his elbow on a rock, was surprised to find water miraculously gushing from it. (Today, many people visit the fountain praying for God to heal them.) After having been Catholic for only seven years, Devasahayam was martyred for his faith and was shot dead in a forest on January 14, 1752. He was beatified 260 years later, on December 2, 2012. In recent years, the Diocese of Kottar initiated an inquiry for a miracle surrounding the successful revival of a 20-week old fetus. On February 28, 2019, upon examining the miraculous healing, the medical board verified it as a true miracle attributed to Blessed Devasahayam.   Possible patronages  It would appear that, in both the literal and figurative sense, hitting rock bottom became a fountain of hope for Devasahayam. His life reminds us that the only title we should hold firmly to is that of being a child of God because even amidst incredible defeat and difficulty, God will always remain with us. It could be fitting, then, for Blessed Devasahayam to be declared the patron of outcasts, converts from Hinduism to Catholicism, and those experiencing their version of “rock bottom”.

Blessed Devasahayam,
For the love of Christ you willingly and patiently underwent torments and tortures for three years, and willingly sacrificed your life and obtained the joy of eternal life and the veneration at the altars as God’s great reward. We praise and thank God for blessing you with this glorious life.
You set apart your whole life for preaching the Kingdom of God, leaving behind all the worldly pleasures of wealth, status, name, fame and glory. You, as a true Disciple of Christ, faithfully put into practice the values of the Gospel, the equality and fraternity of all people on earth.
Assist us to follow you in leaving behind all worldly pleasures and help us to live as children of the kingdom of God and put into practice faithfully the values of the Gospel so that we may one day enter into eternal life to be with God and your company forever and ever.
O! Blessed Devasahayam, Glorious Martyr! Pray For Us!