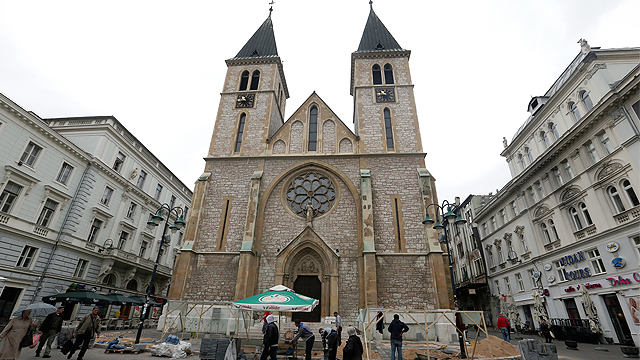 Pope Francis is scheduled to visit Sarajevo, the capital of Bosnia - Herzegovina, June 6. The one day trip is packed full significant meetings. Vatican spokesperson, Jesuit Father Federico Lombardi told journalists this week it would be “notevolissimo” or “highly noteworthy” if the Holy Father arrives at the Sarajevo airport on time at the end of his visit. The visit is set to be noteworthy even without Pope Francis pulling off a timekeeping miracle.
In 1994 St. Pope John Paul II decided to visit the war-ravaged city. The United Nations agreed to provide the pope’s flight. Despite the ongoing fighting the pope was firm in his resolve to visit. Just days before his scheduled trip, fighting intensified in Sarajevo and UN planes carrying supplies to the area were shot at. The UN cancelled its flights and the pope had to cancel his visit.
The pope was finally able to visit Sarajevo in 1997, just two years after the war ended. Despite an end to the fighting, the situation was still not good - especially for Catholics. In 1997, Catholic News Service reported that Catholics who held state jobs lost those positions and were discriminated against in housing and relocation programs. In a meeting with the bishops of Bosnia Herzegovina, St. John Paul II told the bishops not to be “intimidated by any earthly power” but instead use any legitimate means at their disposal to speak out against such discrimination. During that same visit the pope met with Muslim, Jewish and Orthodox leaders. The Bosnian Mufti - Mustafa Cercic announced afterwards that he would call on Muslims to begin a dialogue with Catholics.
In short, the visit of St. John Paul II seemed like a shot in the arm for a nation struggling to find itself again after a war, and for Catholics who had not seen much improvement in their situation two years after the fighting ended.
Pope Francis’ visit to the city comes 20 years after Bosnian, Croatian and Serbian presidents signed the peace agreement known as the Dayton Accords. While the immediate after-effects of war are long gone, reports indicate that division along ethnic lines still exist in Bosnian-Herzegovinian society. His visit, however, has excited citizens of all ethnic and religious groups. In the town of Zavidovici, a Bosnian Muslim woodcarver offered to carve a chair for the pope. The project was financed by the local Catholic parish.
Interreligious dialogue and Ecumenism will be a key theme of this visit: the pope will meet with leaders of other religions and Christian confessions, and he will visit a youth centre that brings together young people of all religious backgrounds. The centre is dedicated to St. John Paul II.
Below is the full itinerary of Pope Francis’ visit to Sarajevo:

***
This week, the Institute for Works of Religions, commonly known as the Vatican Bank, released its annual report for 2014. The report is available in English on IOR’s website.
Watch this week's Vatican Connections below: