Behind Vatican Walls: Phoebe and the Deaconesses 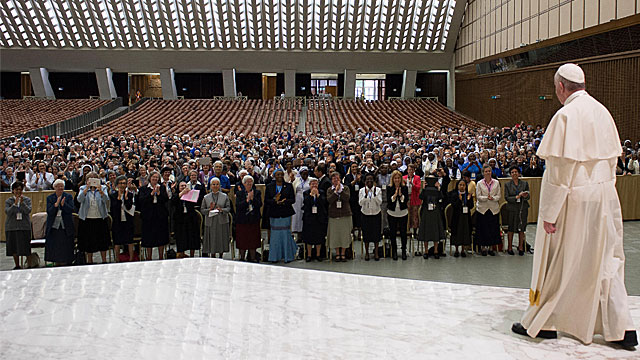 Pope Francis will ask the Vatican’s doctrinal congregation to study the issue of women deacons. The pope announced the decision during a question and answer session with participants of the International Union of Superiors General plenary assembly. During a question and answer session with the nearly 900 religious sisters taking part in the meeting, Pope Francis was asked what prevents the Church from including women in the diaconate. Speaking without a prepared text the pope said there is evidence that women were deacons in the early church. In his letter to the Romans, St. Paul mentions “our sister Phoebe, a deaconess of the Church at Cenchreae” and asks that she be given a warm welcome. Deaconesses are also mentioned at the Council of Chalcedon. The council says deaconesses should not receive “the laying on of hands” under the age of 40. Once they do receive the laying on of hands, the council says they should not get married. Pope Francis told the UISG members the evidence does not provide much detail about what women deacons did or if they were ordained ministers. It appears, he said,  the role of deaconesses in the early church was to help with the baptism of other women and to examine the wounds of abused women and report back to the local bishop.   The pope went on to say he will ask the Vatican’s Congregation for the Doctrine of the Faith to show him any studies that exist about the role of women deacons in the early church. He added that he will ask for a commission to be established to study the question of women deacons, “I think it will be good for the Church to clarify this point.” At the same time Pope Francis warned against what he calls a desire to “clericalize” consecrated and lay women. He said when a lay person or a consecrated person shows a talent for pastoral work in the parish, has brains, and is organized, there is an instinctive reaction to want to give that person a clerical role. By that logic pushing for ordained women deacons is just another attempt to “clericalize” women. Reaction to the pope’s comments were swift and divided. On social media three lines of thought were evident: those who were happy about the pope’s call to study the issue, those who were appalled he would consider such a thing, and those who were upset because they believe the pope did not go far enough. After many news headlines proclaimed the pope is opening the door to women’s ordination, the Vatican issued a statement on May 13 saying “The Pope did not say he intends to introduce the ordination of female deacons and even less did he talk about the ordination of women as priests.”   Reading the transcript of the Pope’s meeting with UISG participants it appears clear Pope Francis is calling for clarity on specific points: what were deaconesses in the early Church? What did they do? How did they do it? Were they ordained? If so, why? Why did the role of deaconess fall out use? The answers to those questions do not lead straight line to women’s ordination. However they could lead to a wider vision of the role of consecrated women. Not to mention such a study could produce a better understanding of what roles lay people can and should take on in today’s church. This week's episode of Vatican Connections will be available below shortly.