Behind Vatican Walls: Historic Meeting of East and West 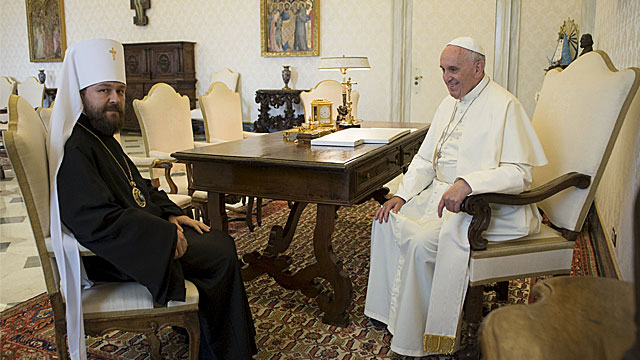 For the first time ever, the pope will meet with the patriarch of the Russian Orthodox Church. The announcement was made in a joint press release issued by the Holy See and the Patriarchate of Moscow. Pope Francis and Patriarch Kirill will meet in Cuba on February 12. At the end of their two hour meeting, they will sign a joint declaration.
Although the announcement seemed to come out of the blue, it reportedly took two years of quiet dialogue and negotiation. Russian Orthodox officials say this does not mean past tensions have been resolved, it just means there is a bigger problem that requires the Catholic and Orthodox churches to work together. Russian Orthodox Metropolitan Hilarion, who is responsible for the church’s foreign relations, said the problem between the two churches is the Ukrainian Catholic Church - which he referred to as “uniates.” He said “regrettably, the problem of Unia is still there, with Unia, remaining a never-healing blooding wound that prevents the full normalization of relations between the two Churches.”
However, Metropolitan Hilarion said the issue of Christians being persecuted in the Middle East and North Africa is bigger than the historic tensions between the two churches and requires them to work together. It is estimated that out of the 1.5 million Christians who used to live in Iraq, there are only 200,000 left in the country.
One of the requirements that had to be satisfied in order for the meeting to happen was finding the right location. According to Russian Orthodox Church’s department for foreign relation, Patriarch Kirill wanted the meeting to happen outside of Europe. The patriarch will visit Cuba, Paraguay and Brazil from February 11 to 22, while Pope Francis is scheduled to be in Mexico from February 12 to 18. The fact that both men would be in Latin America at the same time provided a chance to meet in fairly neutral territory.
The pope’s Mexican itinerary will not change. Instead he will leave Rome earlier than scheduled to allow for a stop over in Cuba. He is expected to touch down in Havana around 2pm local time and be on route to Mexico by 5:30 pm local time. The meeting will take place at Jose Marti International Airport. Some observers say Patriarch Kirill could possibly face backlash from within the Russian Orthodox Church for going ahead with the meeting.
This is not the first time a pope and Russian patriarch have tried to meet. Russian Orthodox official revealed today that from 1996 to 97 negotiations took place for a meeting between St. Pope John Paul II and Patriarch Alexy II. That meeting was supposed to be held in Austria but negotiations stopped after both sides got stuck on two points: actions of the Ukrainian Catholic Church, and the activity of Catholic clergy within the geographic area of the patriarchate of Moscow which Moscow considered proselytism.
Vatican officials said Ecumenical Patriarch Bartholomew has been informed of the meeting and is pleased.
The meeting comes just as Orthodox patriarchs have agreed on the details of the Pan - Orthodox Synod, to be held in Crete starting June 19.
--
CNS photo/L'Osservatore Romano via Reuters
Watch this week's episode of Vatican Connections below: