Archbishop Albert LeGatt, of the Archdiocese of St. Boniface, Manitoba, has received the Pallium from Pope Benedict XVI. 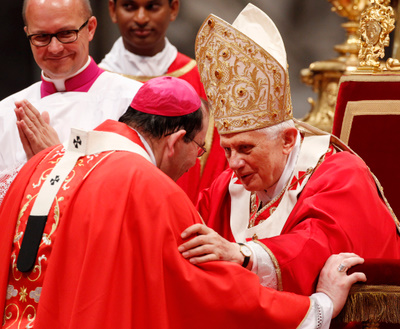 He was among 38 Archbishops to receive the woolen band today as part of Mass on the feast of Saints Peter and Paul. Salt + Light CEO Fr. Thomas Rosica, CSB, explains the significance:

This ancient sign, which the Bishops of Rome have worn since the fourth century, may be considered an image of the yoke of Christ, which the Bishop takes upon his shoulders. The pallium is a circle of wool that hangs around the neck and shoulders with two long pieces draping one over the chest and the other along the back. It is decorated with six black crosses and weighed with pieces of lead. The wool for the pallium comes from two lambs offered every year to the Pope on January 21, Feast of St. Agnes. They are first taken to the Church of St. Agnes to be blessed. The lambs arrive wearing floral crowns, one white and one red. These represent the purity of Agnes, which the archbishops should emulate, and the martyrdom of Agnes, which the archbishops should be prepared to follow. The lambs are then shorn and the pallia [the Latin plural] are made. On the eve of the feast of the great apostles Peter and Paul, (June 28) the pallia are stored overnight in the silver casket above Peter’s tomb in the Vatican crypt. The following day (June 29) the pallia are given to the newly appointed metropolitan bishops, the only occasion in which more than one bishop can be seen wearing the pallium at the same time. Symbolically, the Pope is sharing his mission to “Feed my sheep and lambs” with the archbishops. The wool over the shoulders evokes the lamb over the shoulders of the Good Shepherd. It also reminds the archbishops of the burdens of their office. By investing each new Archbishop with the pallium, the Holy Father confers some of his own weight and responsibilities on him.

Archbishop LeGatt was appointed last July as the chief shepherd of the Archdiocese of Saint Boniface.  He had previously served for eight years as the Bishop of Saskatoon.  A son of Saskatchewan, Archbishop LeGatt studied theology at the Grand Séminaire at Laval University, in Quebec City.  He was ordained to the priesthood in 1983 for the Diocese of Prince Albert, Saskatchewan.  As the Archbishop of Saint Boniface he serves over 113-thousand Catholics in 103 parishes and missions. Let us remember to pray for Archbishop LeGatt — and for all bishops — that they may be ardent and courageous in carrying out the mission entrusted to them by Christ! Catch the encore presentation of the Pallium Mass Tuesday, June 29th at 8:30pm ET/9:30pm PT. - CNS photo/Paul Haring