Ancient tradition and modern ecumenism: Our Lady of Walsingham 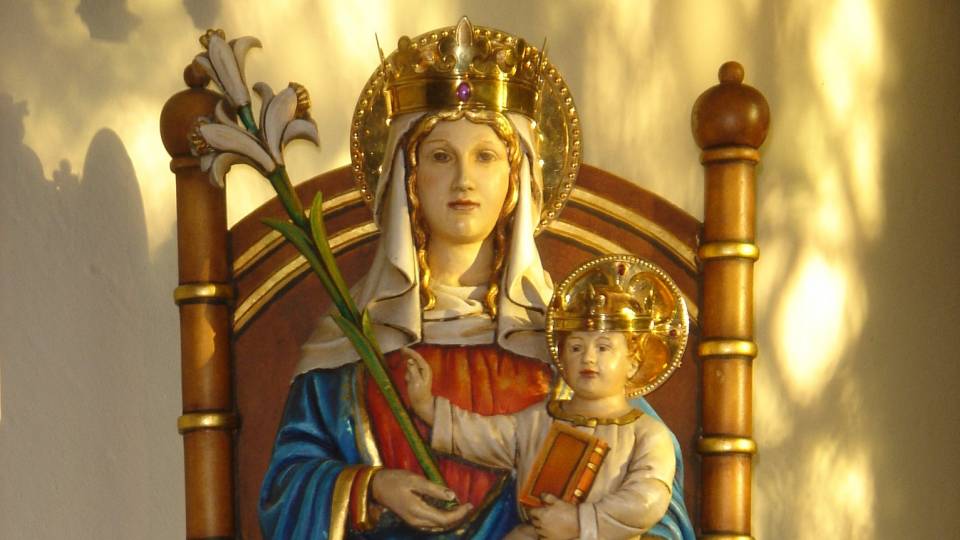 Statue of Our Lady of Walsingham in the Slipper Chapel. Photo by Thorvaldsson (CC BY 3.0; This photo has been cropped.)
Centuries before Lourdes or Fatima, there were medieval shrines to Our Lady that attracted many pilgrims from all over Europe. It may be hard to imagine now, but medieval England was known as the “Dowry of Mary,” as devotion to the Virgin was quite strong there, and she was considered to be a special patroness of the country. Many shrines to the Mother of God existed all over England before the Reformation, although the shrine in a little village in Norfolk called Walsingham was the most prominent of these, where pilgrims would come to make petitions to the Virgin and ask for her intercession. It also had significant royal patronage, being visited by many kings and queens of the realm, including Catherine of Aragon, who was said to have been a regular pilgrim. Today is the feast day of Our Lady of Walsingham in the Catholic Church (Anglicans celebrate it on October 15). While this guise of Our Lady is not well known in North America, she has personal significance for me because my grandmother’s father back in England had a devotion to her and a special interest in the shrine. I have never been there, but I share a fascination with the shrine as a meeting place between Roman Catholic and Anglican Churches, and where medieval devotion intersects with modern ecumenism. The interesting story of the shrine’s founding begins in the 11th century, when a noblewoman named Richeldis de Faverches had a vision of the Virgin Mary, who told her to have a replica built of the holy house in Nazareth where the Annunciation had occurred. The Holy House became a place of pilgrimage and later on was taken over by an order of Augustinian priests who expanded the site into a much larger church and priory where the Holy House was enshrined in a chapel. It was one of the prominent shrines of medieval Europe and became such an important place of pilgrimage that it ranked among Rome, Jerusalem, and Compostela, as England’s own Nazareth. Unfortunately, when the Church of England split from papal authority in the 16th century, the shrines and monasteries were dissolved, and their wealth reverted to the Crown. The shrine of Our Lady of Walsingham was a casualty of this period. 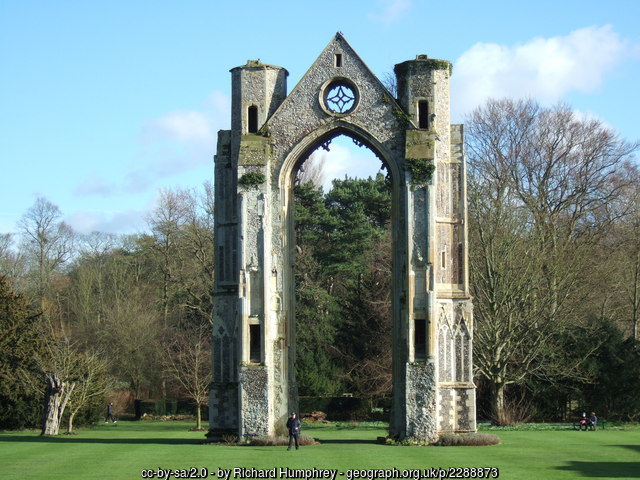 East window of the medieval priory in the grounds of Walsingham Abbey, Norfolk
The village of Little Walsingham became a prominent place of pilgrimage again in the early 1930s, when the vicar of the local Anglican parish of St. Mary’s, Fr. Alfred Hope Patten, restored public devotion to Our Lady of Walsingham by having a statue of her placed in a shrine in the parish church. Fr. Patten was a priest in the Anglo-Catholic tradition of the Church of England and had a great devotion to Our Lady and the medieval heritage of Catholic England. The new statue of Our Lady of Walsingham was based on depictions of the original statue on the medieval priory seals. Devotion grew to the point that the statue was transferred to its own separate shrine in the village, which was then expanded in the late 1930s to include a rebuilt replica of the Holy House of the Annunciation, like the original shrine inspired by the vision of Lady Richeldis de Faverches. Along with the Anglican shrine, there is also a modern Catholic shrine: the Basilica of Our Lady of Walsingham – the only intact building still remaining from before the Reformation. It is what was once known as the “Slipper Chapel,” about a mile outside of the village of Little Walsingham. This was where medieval pilgrims were said to have removed their shoes before walking the last “holy mile” barefoot to the priory shrine in the village. The chapel was abandoned after the Reformation but was purchased and restored in the late 19th century by a wealthy local woman, Miss Charlotte Boyd, a convert to Catholicism from Anglicanism, who then gifted it to the Catholic Church. I have heard that the Catholic and Anglican shrines complement each other well, as people can begin their pilgrimage at the Slipper Chapel before journeying the Holy Mile to the priory ruins and the nearby Anglican shrine. 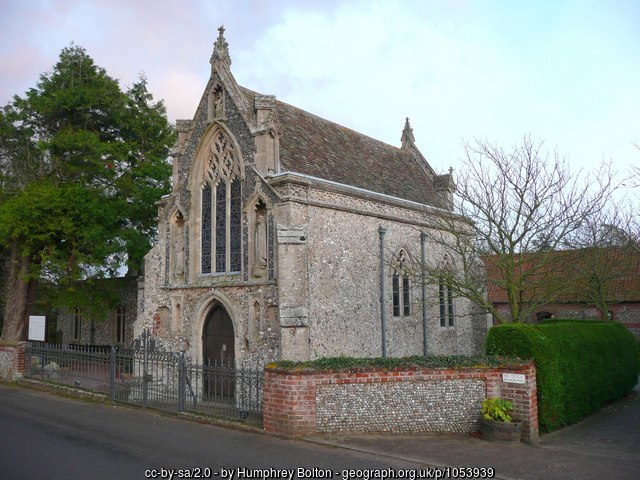 The Slipper Chapel
I first became aware of Our Lady of Walsingham through my grandmother telling me about her father’s interest in the shrine and her pilgrimages with him as she was growing up. Like Fr. Patten, he was also an Anglican priest with a strong devotion to Our Lady and took his parishioners from Yorkshire on pilgrimages to Walsingham. I never met my great-grandfather, but I get the impression that he had a great admiration for the Catholic Church and hoped that the Church of England would reconcile with the Holy See. Sadly, this has yet to happen, but Walsingham is a place where the Anglican and Roman Catholic shrines continue to co-exist harmoniously, sharing what is literally their common ground. To me, Our Lady of Walsingham represents the shared heritage of the Roman and Anglican Churches and the hope for their eventual unity. The re-establishment of the shrines reminds us of the rich Catholic heritage of medieval Europe, and that Catholicism is not limited to specific countries or cultural identities, but it is truly the universal Church and the common heritage of all the western world. Christ and his Blessed Mother are not confined by culture, and England is just one example of a country far from the Mediterranean that has a strong devotion to Our Lady, despite the political movements that severed it from the main body of the Church for centuries. For those with an appreciation for the history and heritage of the Church, the Walsingham shrine represents the revival of the devotion to Our Lady that began there almost a thousand years ago, and in the modern context, it represents ecumenical cooperation between Roman Catholics and Anglicans. 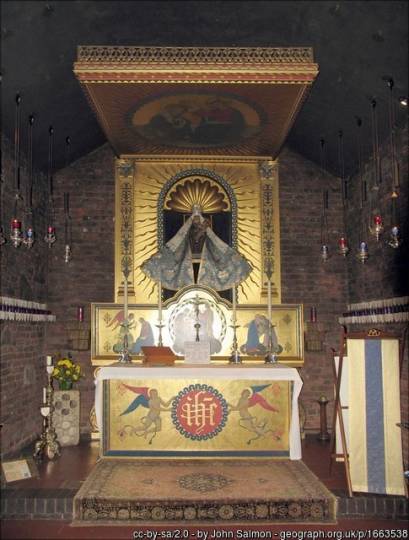