A True Mission of Love: Being on the Front Lines of the Pro-Life Movement

I would like to thank Fr. Thomas Rosica, C.S.B., for inviting me to write the first of several reflections of what it means to work as an agent of life on the front lines.
When I was fourteen years old, I saw the documentary, "The Silent Scream" which depicted an abortion from the perspective of the child. The abortionist in the video, Dr. Bernard Nathanson performed over 75,000 abortions and even aborted his own children before he saw the humanity of the child in the womb.  Little did I know at the time, that a deep seed would be planted in my heart and that God would water that seed and have me work on the front lines of the pro-life movement. 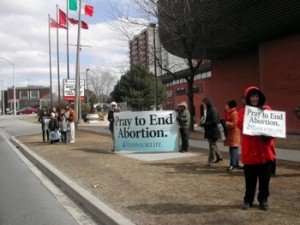 I was always "personally pro-life" and I must say that I thought that was enough. I spoke up in class to defend life and spoke openly about my stance, but did not know how to make a difference. However, in the summer of 2005, everything changed. For the first time I realized that being "personally pro-life" did nothing to end abortion. It's only when we become publicly pro-life that we can make a true impact. In the summer of 2005, I did a summer mission that would change my life.  I participated in the "Crusade For Life" with other College and University students from the United States and Mexico. We had intensive training in Washington, DC, and it was there that I was first trained to do sidewalk counselling. We drove across the United States and we walked from San Diego to Sacramento (about 1200 miles) for the cause of Life and prayed outside of abortion facilities. I would never be the same. I remember standing in front of my first abortion mill, I saw for the first time, the torment on the faces of these women and men who were entering these facilities.  The pain, anger and confusion could not be hidden.  What shocked me the most was the amount of coercion that I witnessed.  There were boyfriends who would not let their girlfriends talk with us about resources and moms who were dragging their young teens inside.  It was horrifying. I must tell you that as horrifying as it was seeing what happened when the women were on their way in, it was the way I saw them on the way out that will forever remain inscribed in my mind.  Many of these women could barely walk and needed our assistance, they were throwing up, and some of the women instantly realized the gravity of their “choice” and would do anything to go back, but it was too late.  But, we were there.  We were there to love them.  We loved them the same on the way in as we did on the way out. Of course we do everything to change their minds, but if they don’t, we are there. Being on the front lines is truly a mission of love. Monsignor Phillip Reilly, who started the “Helpers of God’s Precious Infants” in Brooklyn, New York, changed the way I looked at everything.  Before Monsignor Reilly, I had a great 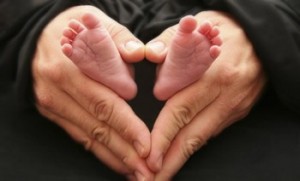 intention to be at the abortion facilities to ‘save the babies’ but he told me that the ultimate goal was not to end abortion. At first I was confused, but he told me that the ultimate goal was “conversion of souls.” Being present at the abortion facilities is like being at Calvary.  It is our modern day Calvary, if you will, the place where innocent blood is being shed. Our role is to be like Mary and John at the foot of the cross to comfort Christ.  I used to leave the abortion facility if all the babies died that day, without waiting for the moms to come outside. But now, I wait for the moms to come out, because again, it is not just about saving babies, (we do our best) it’s about conversion and being there for the broken mothers and fathers is crucial. I have had many opportunities to witness, pray and love the women and men who just went through the abortion experience. I gave out numbers for confession, rosaries and prayer cards to those who wanted them.  This my friends, is what it’s all about: LOVE. That is why I have dedicated my life to the pro-life movement, to this beautiful mission of love. I am now the National Director of the 40 Days for Life in Canada and am currently running my fourth campaign. The 40 Days for Life Campaign that is currently underway began in College Station, Texas in 2007.  It was organized as a 24-hour vigil that would last for 40 days. The 40-day campaign tracks Biblical history, where God used 40-day periods to transform individuals, communities ... and the entire world. From Noah in the flood to Moses on the mountain to the disciples after Christ's resurrection, it is clear that God sees the transformative value of His people accepting and meeting a 40-day challenge. Since that first event, the campaign has spread over the past four years to include 247 cities around the world this year.  Participants embrace the three components of the campaign: prayer and fasting, constant vigil and community outreach.  40 Days for Life is an extremely laudable campaign that invites the public to stop, reflect, and act. Since Ash Wednesday, (March 9th, 2011), we have had at least three women change their minds from abortion. Please join me on the front lines.  Go to www.40daysforlife.com/toronto to sign up. Nicole Campbell has been organizing 40 Days for Life in various Canadian cities since 2009 through Campaign Life Coalition (CLC). Keep an eye out for more of her on-the-ground blog posts in the coming weeks on the S+L blog.