A Day in the Life of a Synod Auditor: Not So Ordinary 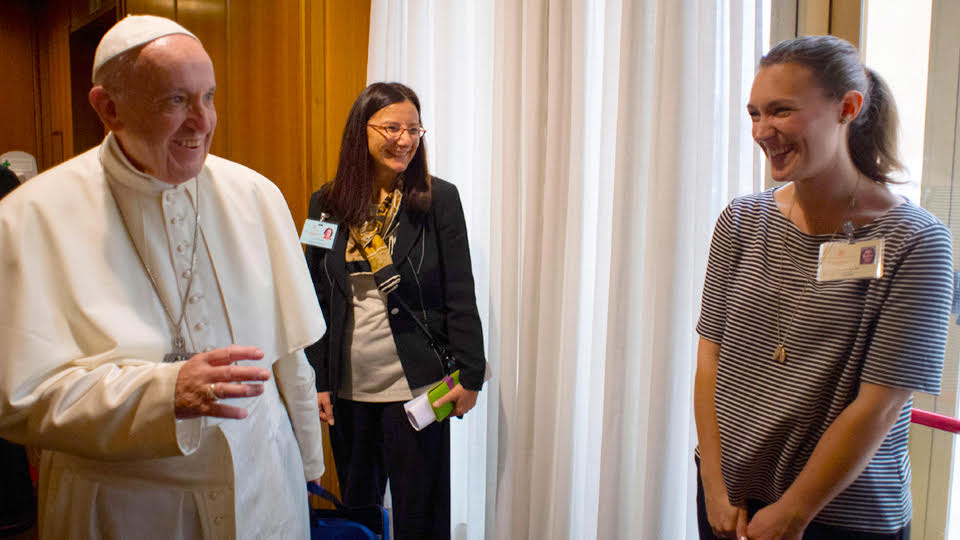 Emilie Callan (right) with Pope Francis at the synod
I never imagined there would come a day when running into the pope would become - almost - ordinary. That I would walk into a building and find him, once again, greeting bishops and cardinals and Vatican staff, like any boss would do first thing in the morning when he arrives at the office (at least, I’m lucky enough to work somewhere where that happens!). That making a trip to the water cooler next to the synod hall would mean having to walk past Papa Francesco. And that riding the elevator with him would be one of the most awkward experiences of my life, as elevator rides usually are. Perhaps “ordinary” is not the correct word here. “Human” would be a better term to describe what we’ve been experiencing with Pope Francis and the synod fathers day in and day out. These little moments of awkwardness, or ordinariness, are all very human. This week, during our morning pausa, I saw bishops lining up for coffee for the first time! In previous weeks, everyone crowded the baristas like they were at a bar, eagerly awaiting their caffeinated drink. As I was saying, ordinary. But also, so human. This might all sound trivial. However, as a young auditor, experiencing life at the Vatican for the first time, I’m impressed not only by the ordinariness of our encounter with the hierarchical Church but especially by the simplicity of our interactions with the synod fathers and even with the pope. My experience so far has been one of freedom. Most of that is due to the time we spend in our circuli minori (small groups). Here’s a quick explanation: Every week, for three weeks, we spend a few days in the synod hall, where synod fathers, experts, auditors, the General Secretariat for the synod, and the pope gather to present and to listen to the interventions. The following 2-3 days are dedicated to small group discussion. This is where the bulk of the work happens during the synod. We’re divided by language and present amendments to the Instrumentum laboris we wish to see in the synod’s final report. I was placed in a group of approximately 20 French-speakers called “Gallicus A” (in Vatican speak, that means “French A”). That number represents bishops from the Middle East, Africa, Europe, and North America, and also a few auditors (namely myself) and experts. The synod fathers in each group vote for one moderator and one “rapporteur”, who keeps track of the conversation, writes a report each week to present during our general assembly, and submits the groups amendments. The experts and a specially appointed writing commission take into account the reports from the various groups and work together to prepare the final report. I don’t envy them. 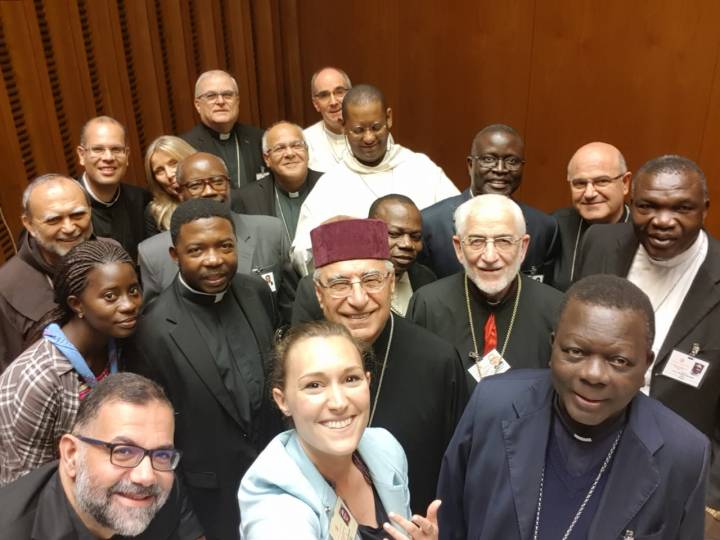 We completed our work on the third and final part of the Instrumentum laboris last week. The rest is now left in the hands of the experts and synod fathers elected to write the final report. Our small group meetings were some of the most intensive and edifying moments of the synod. Cultural differences were immediately apparent. It often took time simply to understand what each person was saying, what meaning they put behind a certain word, or why they felt so strongly about a particular issue. The synod fathers always spoke to each other with charity and patience, and everyone had the freedom to speak, even the auditors and experts. Prayer surrounded our meetings. In the morning we opened with the Divine Office. At the end of each meeting, we closed with the Angelus. If things became intense or heavy in the middle of it all, our moderator wisely made us recite a Hail Mary or two, to rest and refocus. This kind of ordinary or human encounter between the bishops and the auditors present at this synod is something young people crave in their local churches. They’ve said it in their interventions. Young people want and thirst for an encounter with the living God which they can experience through an encounter with a living, breathing Church, that is through relationship with authentic and joyful witnesses.