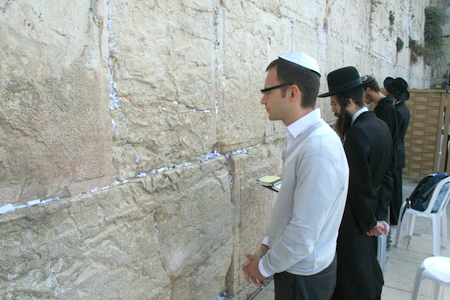 The following article was published in the YSN newsletter, which is sent to the student journalists writing for The Catholic Register's Youth Speak News section. The article is a response to the question, "How can you cover a religious story as a journalist, while still having a personal spiritual experience?"
Though it’s been over a month since I returned from filming in the Holy Land, I’m still spiritually “unpacking” the experience. It was not the retreat I envisioned. Yes, I lived in Israel and the Palestinian Territories for five weeks and explored a great number of biblical sites, such as the Church of the Nativity and the Holy Sepulchre. But the logistics of scheduling 27 consecutive filming days—in a foreign, complex land, no less, where English is not universally spoken—left regrettably little time for reflection. [The intense schedule also explains my conspicuous absence from the S+L blog in November and December.] Experiencing this challenge early on, it became obvious that to film film a documentary about pilgrimage, I needed to engage in some immersion journalism. To remain an objective observer in these sacred sites, I reasoned, would conceal the spirituality of such “thin places” where the supernatural seems so readily perceived. 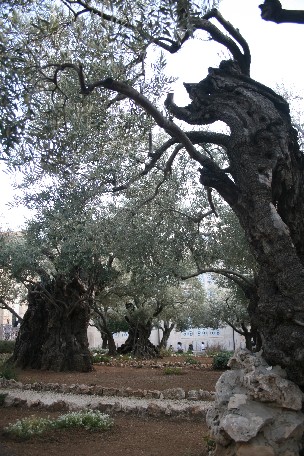 My approach to each ancient church was simple enough: genuflect always, always mean it. Though I could not attend Mass daily, when I did worship, it would be with all my soul. I resolved—and upon each profane failure, resolved again—to never curse the setbacks that came along with an opportunity so clearly blessed. In some ways, my spiritual experience was augmented by my press pass. We were usually among hundreds of visitors at each attraction, yet the priests and religious overseeing the sites would usually accommodate our filming requests. Special among them was our entrance into the Garden of Gethsemane in Jerusalem. This small plot of land, fenced off from the public, contains some of the most ancient olive trees in Israel—some may have stood over Jesus as He sweated blood in anguished anticipation of His passion. I was also privileged to receive special insights from our interview guests, who included some of the most prominent religious figures in the Holy Land. Who better to explain the poignancy of the Western Wall than Yona Metzger, one of the two Chief Rabbis of Israel? And who has a better perspective on Middle East Christianity than Archbishop Fouad Twal, the Patriarch responsible for all Latin-rite Catholics in the Holy Land? Despite those advantages, at just about every stop I found myself thinking about when I could return without any professional responsibilities—to pray without interruption and be unconcerned with capturing each moment on film. If all goes well this spring, our finished documentary will mulitply a similar desire among our audience: to go to the Holy Land on a proper pilgrimage.