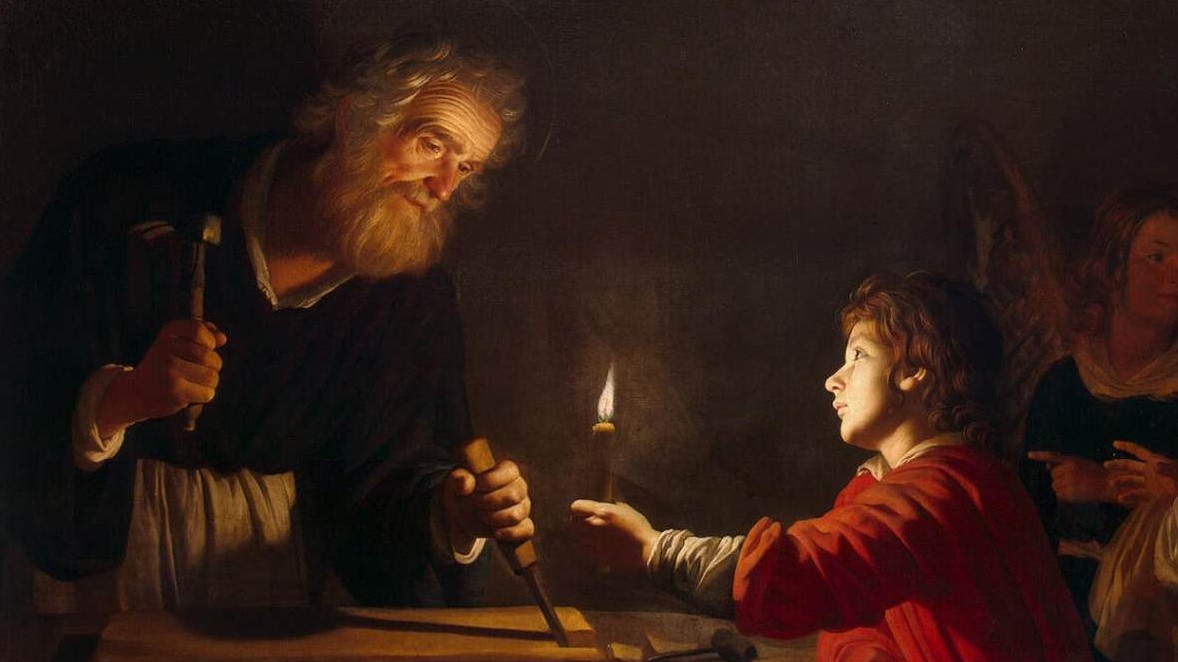 Detail of Childhood of Christ by Gerrit van Honthorst (Source: Wikimedia Commons)
This Friday is the feast of St. Joseph – husband of Mary, earthly father of Jesus, patron of workers, patron of the Universal Church, and for those of us who live in Canada, patron of our country, too. It’s a special day, which we celebrate as a solemnity in the Church – the highest level of feast day. It’s a day to set aside our Lenten gloominess for a brief moment and give thanks (and we’ll get the chance again next week with the Annunciation). But this year, March 19 is an extra special day because we are currently observing the Year of St. Joseph. I’m sure many people will be looking for ways to celebrate and/or dig deeper into their knowledge of and relationship with our amazing patron of the Church. What plans do you have? If you’re stuck for ideas, here are a few resources that might help. And don’t forget that our friendship with St. Joseph isn’t just for one feast day (well, two, actually – we celebrate St. Joseph the Worker on May 1) or one special year. In the words of St. Teresa of Avila:

I wish I could persuade everyone to be devoted to this glorious saint, for I have great experience of the blessings which he can obtain from God. I have never known anyone to be truly devoted to him and render him particular services who did not notably advance in virtue, for he gives very real help to souls who commend themselves to him. For some years now, I think, I have made some request of him every year on his festival and I have always had it granted. If my petition is in any way ill directed, he directs it aright for my greater good.

This short video is a good place to start or if you don’t have a lot of time. Sebastian Gomes takes a look at what the Bible reveals about St. Joseph and his understanding of God’s law. And it might be a good starting point, too, for a reflection. We might ask ourselves: “Where have I neglected to show mercy and used the ‘law’ as an excuse?” Because St. Joseph is nothing if not a good role model for us.

If you’re looking for something to read rather than watch, we’ve got you covered. We have quite a few St. Joseph-themed blogs on our website. Click here to browse them now. There are all sorts of prayers and reflections. Deacon Pedro Guevara-Mann wrote one called “St. Joseph: A Man of Dreams; A Man of Action!” which is one of our most popular posts!

The novena is one of the most popular forms of prayer we have in the Catholic Church outside the Mass. There are all sorts of prayers for all sorts of feast days and other occasions and special intentions. But, really, you can do any kind of prayer you want. The main thing is to pray the same prayer for nine days. But it’s also helpful to have a set prayer and even to have people to pray it with. If you’re looking for some novena companionship, I invite you to pray the St. Joseph Novena with Salt + Light Media. We have a different video for each day of the novena. And don’t worry that you won’t finish in time for March 19. You can start your novena any time. And if you’d like to explore some other prayers to St. Joseph, Deacon Pedro Guevara-Mann provides us with a healthy set of options here.

And if you’re going to spend time with St. Joseph, why not also get to know one of his best friends? This film is about St. André Bessette, who brought healing to hundreds of people through the intercession of St. Joseph and built the massive Oratory of St. Joseph in Montreal – the largest church in Canada and the largest one anywhere dedicated to St. Joseph. Perhaps learning about this humble saint’s devotion to our Church’s patron might provide an inspiration for your own devotion. This movie is available to rent or purchase (just follow the links). Watch the trailer below!

If you’re going to be friends with someone, you need to spend time with them and get to know them. Our heavenly friends are no different from our earthly friends. Time spent talking with them (prayer) is essential but so is getting to know them better. Prayer is our side of the conversation. When we learn about them, that’s theirs. Of course, we don’t actually have a lot of facts about St. Joseph. There’s very little written about him in the Bible, and we don’t know anything he actually said. But for people who have studied him, there is a surprising amount that we can infer about him. I once read a book called, simply enough, St. Joseph by Boniface Llamera, OP. It was very densely analytical and theological, and I found it hard going, but I also found it well worth the time and effort it took to read it. That particular book, though I recommend it, is out of print. But there are plenty of other books out there. Who knows? Maybe you’ll find a new favourite. If you’re looking for a place to start, you might want to try this list.

If books and blogs aren’t enough or you’re looking for something a little different, why not try reading what the popes have written about St. Joseph in their official documents? Quamquam Pluries was written by Pope Leo XIII in 1889. It’s an encyclical, but don’t worry, encyclicals back then were not quite as long as they are now. In fact, this is the shortest of the three documents. Redemptoris Custos is an apostolic exhortation written by Pope St. John Paul II in 1989, in honour of the 100th anniversary of Quamquam Pluries. And finally, we have Patris Corde, the apostolic letter written last year by Pope Francis for the Year of St. Joseph.

In Italy, for the feast of St. Joseph they have a special treat called zeppole di San Giuseppe, a wonderful custard(or cream)-filled pastry topped with a cherry. If you’re lucky enough to live in Italy or in a city with an Italian bakery, you can just buy one (or several!). If not, or if you’re handy in the kitchen, why not try making them yourself? In any case, this adorable Italian nonna is a joy to watch. She even sings a prayer while she’s cooking: O San Giuseppe, prega per me! (O St. Joseph, pray for me!) Buon appetito!