400th anniversary of the death of St. Camillus de Lellis 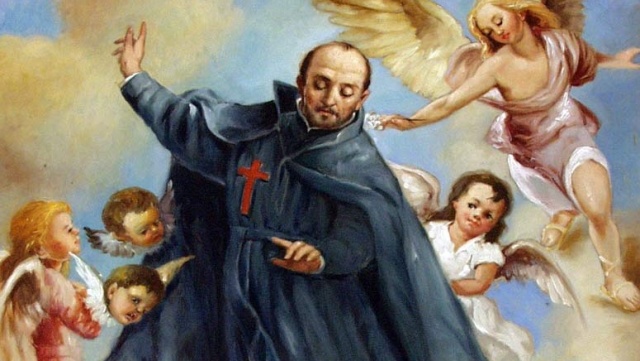 Today is the feast day and the 400th anniversary of the death of St. Camillus de Lellis, patron of nurses and the sick.
Camillus de Lellis was born on May 25, 1550 in Bucchianico, Italy.  He possessed a violent temper and struggled with a horrible addiction to gambling, and by 1574 was reduced to poverty and shame in Naples. He fought for the Venetians against the Turks.  He became a Capuchin novice, but was unable to be professed because of a badly diseased leg he contracted while fighting the Turks. Through a long and hard struggle he eventually conquered his weaknesses .  His dramatic conversion was evident as he began to devote himself to caring for the sick. He became director of St. Giacomo Hospital in Rome.
Camillus chose a red cross as the distinguishing badge for the members of his Order to wear on their black cassocks. He taught his volunteers to look upon the hospital as a house of God, a garden where the voices of the sick were music from heaven. He obtained permission from St. Philip Neri to be ordained. Along with two companions, he founded his own congregation, the Ministers of the Sick , also referred to as the Camillians, who were dedicated to the care of the sick. They ministered to the sick of Holy Ghost Hospital in Rome, founded a new house in Naples in 1588, and cared for those aboard plague-stricken ships in Rome .
In 1591, the Congregation was made into an order to serve the sick by Pope Gregory XIV, and in 1591 and 1605, Camillus sent members to minister to wounded troops in Hungary and Croatia, the first field medical unit.  Suffering and gravely ill for many years, he resigned as superior of the Order in 1607. On July 14, 1614 he died in Rome. He was canonized in 1746, was declared patron of the sick, by Pope Leo XIII, and patron of nurses and nursing groups by Pope Pius XI.
One of his most famous words of wisdom was this: "Brother, if you commit a sin and take pleasure in it, the pleasure passes but the sin remains. But if you do something virtuous even though you are tired, the tiredness passes but the virtue remains."
St Camillus de Lellis is a true inspiration to all of us who deal with our own moral, spiritual or physical struggles and a wonderful testament to the real miracles of Christian charity.