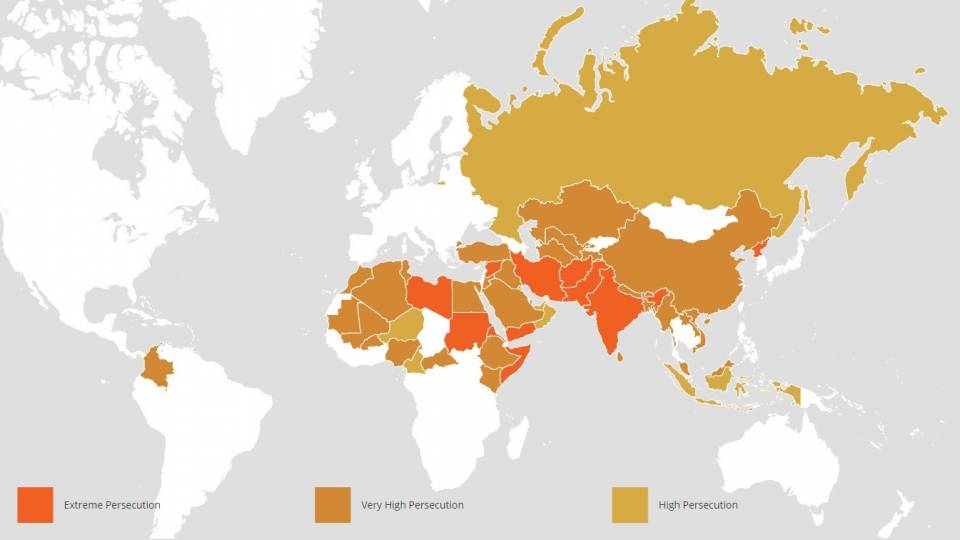 Map showing areas with highest levels of Christian persecution in the world, according to Open Doors (taken from opendoorsca.org)
One Christian in eight is persecuted on account of their faith. This is the finding of the non-denominational NGO Open Doors, which publishes the World Watch List for Christian persecution every year. The new edition, published on January 15, 2020, lists the countries where Christians are most heavily persecuted. At the top of the list is North Korea, where government persecution of Christians is harsh and systematic. Considered dangerous enemies of the state, tens of thousands of Christians are imprisoned in forced labour camps. Simply possessing a Bible can be fatal. Afghanistan is the second most dangerous country for Christians. There is not a single building officially belonging to the Church in this country. A person who leaves Islam in order to convert is considered a traitor and must be eliminated. Next comes Somalia where Christians are targeted by the terrorist group Al-Shabaab. This group wants to establish sharia law in the country. They hunt down and kill all those who are suspected of being Christians. Open Doors points out that persecution can take a variety of forms. It can be physical and deadly, or psychological and discriminatory. But whatever the type of persecution of which they are the victims, Christians are being persecuted more and more, due in particular to the expansion of regions affected by jihadism. On the other hand, for the first time in three years, the number of those killed has declined this year. In 2019, at least 2983 Christians were killed because of their beliefs (that is, eight Christians killed every day), whereas there were 4305 the year before. This decline of 31% is explained by a decrease in the (known) number of Christians killed in Nigeria. In fact, the Fulani herdsmen have partly altered their tactics. Besides killing, they also engage in kidnapping and abduction for ransom. Nigeria, however, remains the country more than any other in the world where we find the most Christians killed for their faith, followed by the Central African Republic. Thus, it is in Africa that the greatest number of Christians are killed. Other data relate to the targeting of religious buildings. At least 9488 churches have been attacked during the course of 2019. That means, on average, 182 churches every week. This number is five times what it was the previous year (that is, an increase of 414%), owing to the action of the Chinese government against churches in China. Moreover, it is precisely in China that Christian prisoners are most numerous. There are close to 1000 Christian prisoners detained arbitrarily in China, accused of dissidence against the state. In Eritrea as well, government security forces lead numerous raids against Christians and against house churches. Hundreds of Christians have been arrested and are detained by the government in terrible conditions. In total, the World Watch List cites 3711 Christians arbitrarily imprisoned across the world, as compared with 3150 the previous year. To end on a good note, Open Doors recalls the liberation of Asia Bibi in 2019. This Pakistani Christian had been condemned to death for blasphemy and imprisoned in her country for nine years. She is now a refugee in Canada, hoping that the other Christians who experience false accusations and continual discrimination will not be forgotten.