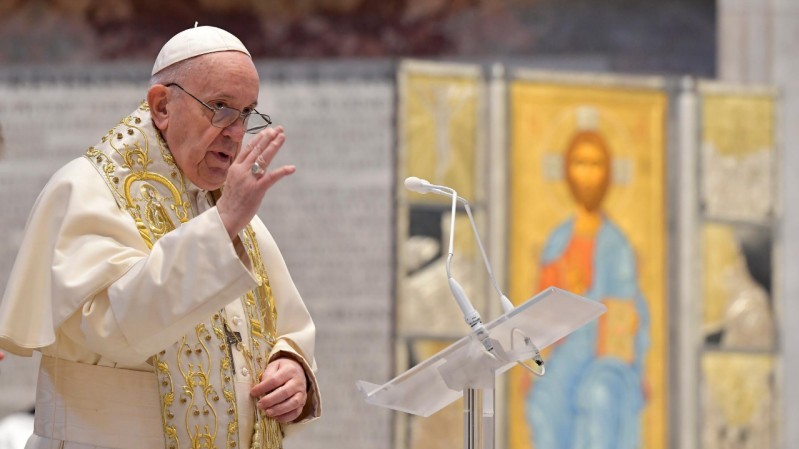 On Easter Sunday, April 4, 2021, after celebrating Mass in St. Peter's Basilica in the Vatican, Pope Francis gave his annual Easter blessing "urbi et orbi" (to the city and to the world). Read below the full text of the Easter message the Holy Father delivered on this occasion. All who receive this blessing are entitled also to receive a plenary indulgence. To learn more about indulgences and the normal conditions for receiving one, read this blog.

Dear Brothers and Sisters, a good, happy and peaceful Easter! Today, throughout the world, the Church’s proclamation resounds: “Jesus, who was crucified, has risen as he said. Alleluia!” The Easter message does not offer us a mirage or reveal a magic formula. It does not point to an escape from the difficult situation we are experiencing. The pandemic is still spreading, while the social and economic crisis remains severe, especially for the poor. Nonetheless – and this is scandalous – armed conflicts have not ended and military arsenals are being strengthened. That is today’s scandal. In the face of, or better, in the midst of this complex reality, the Easter message speaks concisely of the event that gives us the hope that does not disappoint: “Jesus who was crucified has risen”. It speaks to us not about angels or ghosts, but about a man, a man of flesh and bone, with a face and a name: Jesus. The Gospel testifies that this Jesus, crucified under Pontius Pilate for claiming he was the Christ, the Son of God, rose on the third day in accordance with the Scriptures, just as he had foretold to his disciples. The crucified Jesus, none other, has risen from the dead. God the Father raised Jesus, his Son, because he fully accomplished his saving will. Jesus took upon himself our weakness, our infirmities, even our death. He endured our sufferings and bore the weight of our sins. Because of this, God the Father exalted him and now Jesus Christ lives forever; he is the Lord. 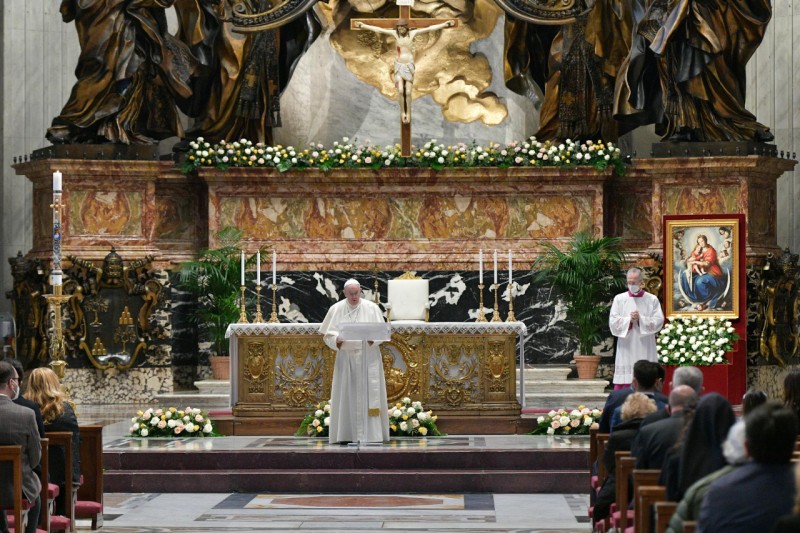 Pope Francis delivers his Easter Urbi et Orbi message in St. Peter's Basilica in the Vatican on Sunday, April 4, 2021. Photo courtesy of Vatican Media.
The witnesses report an important detail: the risen Jesus bears the marks of the wounds in his hands, feet and side. These wounds are the everlasting seal of his love for us. All those who experience a painful trial in body or spirit can find refuge in these wounds and, through them, receive the grace of the hope that does not disappoint. The risen Christ is hope for all who continue to suffer from the pandemic, both the sick and those who have lost a loved one. May the Lord give them comfort and sustain the valiant efforts of doctors and nurses. Everyone, especially the most vulnerable among us, requires assistance and has the right to have access to necessary care. This is even more evident in these times when all of us are called to combat the pandemic. Vaccines are an essential tool in this fight. I urge the entire international community, in a spirit of global responsibility, to commit to overcoming delays in the distribution of vaccines and to facilitate their distribution, especially in the poorest countries. The crucified and risen Lord is comfort for those who have lost their jobs or experience serious economic difficulties and lack adequate social protection. May he inspire public authorities to act so that everyone, especially families in greatest need, will be offered the assistance needed for a decent standard of living. Sadly, the pandemic has dramatically increased the number of the poor and the despair of thousands of people. “The poor of every kind must begin once more to hope”. Saint John Paul II spoke these words during his visit to Haiti. It is precisely to the beloved Haitian people that my thoughts turn in these days. I urge them not to be overwhelmed by difficulties, but to look to the future with confidence and hope. And my thoughts turn especially to you, my dear Haitian brothers and sisters. I am close to you and I want a definitive resolution to your problems. I am praying for this, dear Haitian brothers and sisters. The risen Jesus is also hope for all those young people forced to go long periods without attending school or university, or spending time with their friends. Experiencing real human relationships, not just virtual relationships, is something that everyone needs, especially at an age when a person’s character and personality is being formed. We realized this clearly last Friday, in the Stations of the Cross composed by the children. I express my closeness to young people throughout the world and, in these days, especially to the young people of Myanmar committed to supporting democracy and making their voices heard peacefully, in the knowledge that hatred can be dispelled only by love. 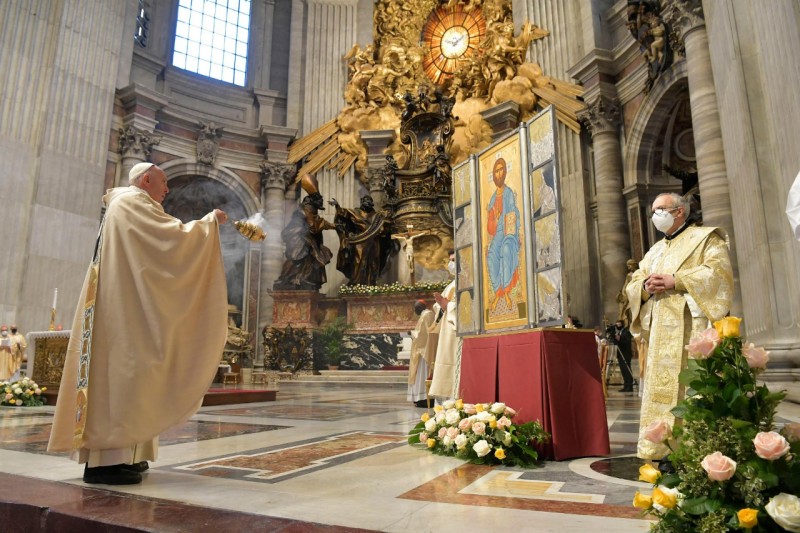 Pope Francis celebrates Mass in St. Peter's Basilica in the Vatican on Easter Sunday, April 4, 2021. Photo courtesy of Vatican Media.
May the light of the risen Jesus be a source of rebirth for migrants fleeing from war and extreme poverty. Let us recognize in their faces the marred and suffering face of the Lord as he walked the path to Calvary. May they never lack concrete signs of solidarity and human fraternity, a pledge of the victory of life over death that we celebrate on this day. I thank the nations that generously receive people who are suffering and seeking refuge. Lebanon and Jordan in particular are taking in many refugees who have fled from the conflict in Syria. May the people of Lebanon, who are undergoing times of difficulty and uncertainty, experience the consolation of the Risen Lord and find support from the international community in their vocation to be a land of encounter, coexistence and pluralism. May Christ our peace finally bring an end to the clash of arms in beloved and war-torn Syria, where millions of people are presently living in inhumane conditions; in Yemen, whose situation has met with a deafening and scandalous silence; and in Libya, where at last there is hope that a decade of bloody strife and clashes may come to an end. May all parties involved commit themselves effectively to ending conflicts and allowing war-weary peoples to live in peace and to begin the reconstruction of their respective countries. The Resurrection naturally takes us to Jerusalem. On Jerusalem we ask the Lord to grant peace and security (cf. Ps 122), so that it can embrace its calling to be a place of encounter where all can see one another as brothers and sisters, and where Israelis and Palestinians will rediscover the power of dialogue for reaching a stable solution that will enable the two states to dwell side by side in peace and prosperity. On this festive day, my thoughts also return to Iraq, which I had the joy of visiting last month. I pray that it may continue along the path of peace and thus fulfil God’s dream for a human family hospitable and welcoming to all his children.[1] May the power of the risen Lord sustain the peoples of Africa who see their future compromised by internal violence and international terrorism, especially in the Sahel and Nigeria, as well as in Tigray and the Cabo Delgado region. May the efforts to resolve conflicts peacefully continue, in respect for human rights and the sacredness of life, through fraternal and constructive dialogue in a spirit of reconciliation and true solidarity. 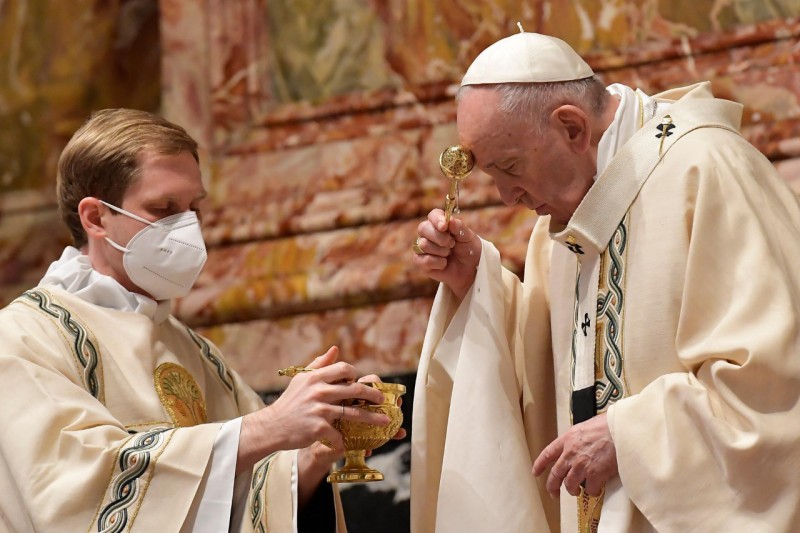 Pope Francis celebrates Mass in St. Peter's Basilica in the Vatican on Easter Sunday, April 4, 2021. Photo courtesy of Vatican Media.
There are still too many wars and too much violence in the world! May the Lord, who is our peace, help us to overcome the mindset of war. May he grant that prisoners of conflicts, especially in eastern Ukraine and Nagorno-Karabakh, may return safely to their families, and may he inspire world leaders to curb the race for new weaponry. Today, April 4, marks the International Awareness Day against anti-personnel landmines, insidious and horrible devices that kill or maim many innocent people each year and prevent humanity from “walking together on the paths of life without fearing the threat of destruction and death!”[2] How much better our world would be without these instruments of death! Dear brothers and sisters, once again this year, in various places many Christians have celebrated Easter under severe restrictions and, at times, without being able to attend liturgical celebrations. We pray that those restrictions, as well as all restrictions on freedom of worship and religion worldwide, may be lifted and everyone be allowed to pray and praise God freely. Amid the many hardships we are enduring, let us never forget that we have been healed by the wounds of Christ (cf. 1 Pet 2:24). In the light of the Risen Lord, our sufferings are now transfigured. Where there was death, now there is life. Where there was mourning, now there is consolation. In embracing the cross, Jesus bestowed meaning on our sufferings and now we pray that the benefits of that healing will spread throughout the world. A good, happy and serene Easter to all of you! [1]  Address at the Interreligious Meeting in Ur, 6 March 2021. [2] John Paul II, Angelus, 28 February 1999.   Text courtesy of Libreria Editrice Vaticana (click here for original source) 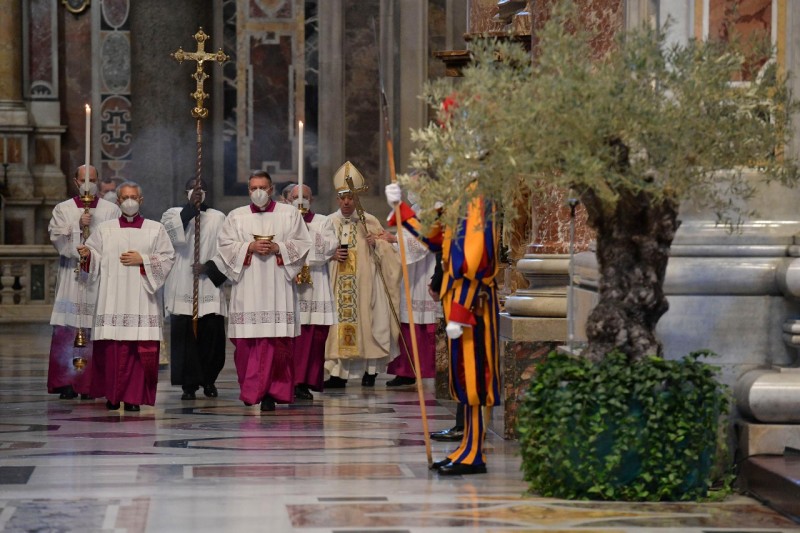