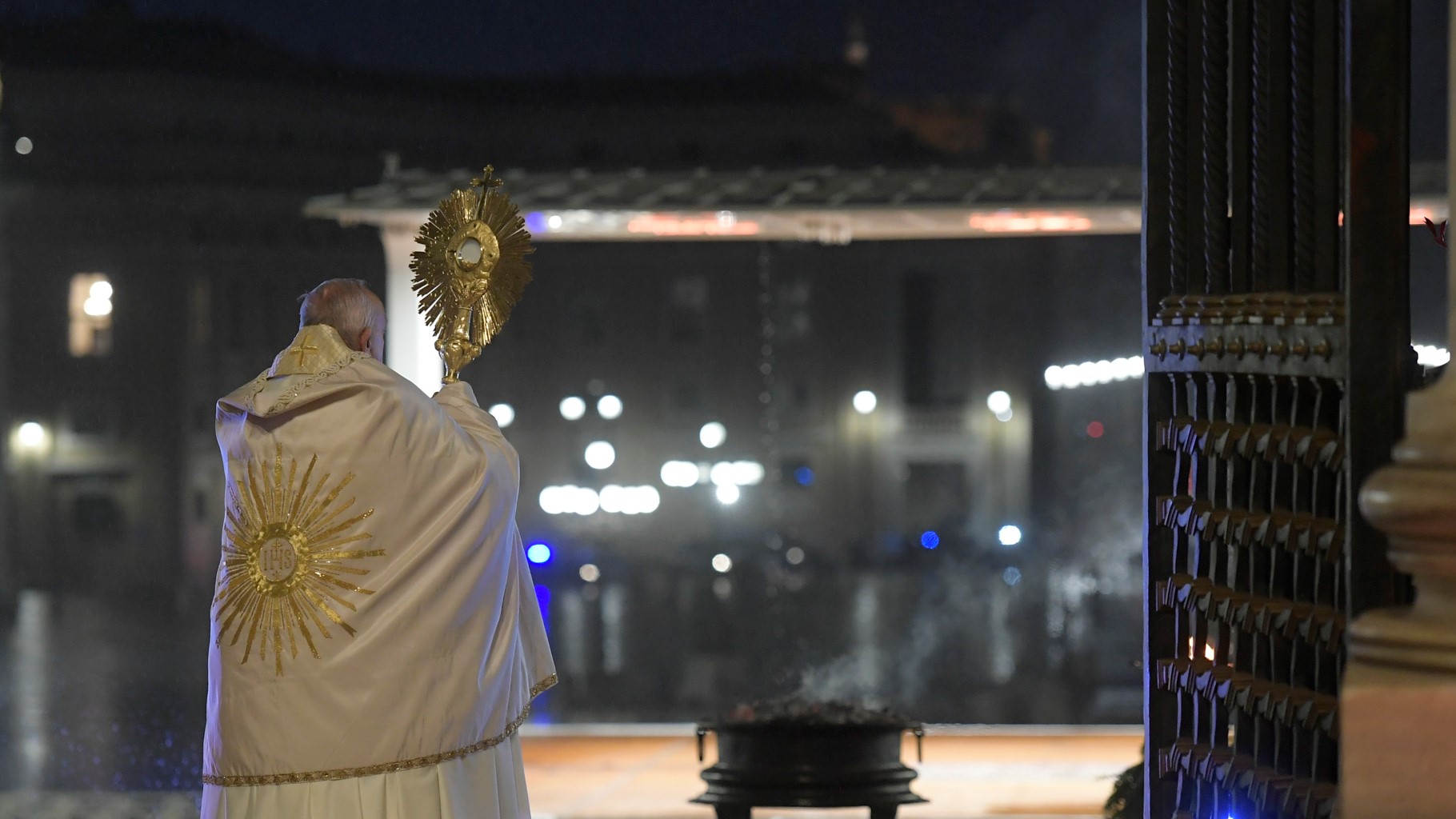 Pope Francis holds the monstrance as he delivers his extraordinary blessing "urbi et orbi" (to the city and the world) during a prayer service in the portico of St. Peter's Basilica at the Vatican on March 27, 2020. This blessing carried with it a plenary indulgence. (CNS photo/Vatican Media)

The righteous one, my servant, shall make many righteous, and he shall bear their iniquities… …because he poured out himself to death, and was numbered with the transgressors; yet he bore the sin of many, and made intercession for the transgressors. (See Isaiah 53:11-12)

Are Indulgences Still a Thing?

Last Friday, the world tuned in to pray with Pope Francis for an end to the COVID-19 pandemic. It was a moving event with Scripture readings, a reflection by the Holy Father, a time of adoration of the Blessed Sacrament, and Benediction. This special blessing was the pope’s “urbi et orbi”, which he traditionally only gives on Christmas and Easter. [If you missed it, you can still watch it on our Facebook page videos.] This formal blessing “to the city and the world” carries with it a plenary indulgence for all who follow by television, internet, or radio. The event prompted a lot of people to ask about that particular indulgence and even whether indulgences were “still a thing”. Last week we explained a bit about the coronavirus special indulgence and the conditions for receiving it. But there is so much more to indulgences. The Church’s teaching on indulgences is a beautiful and ancient teaching that is very much misunderstood. So, let’s take it one step at a time.

What is an Indulgence?

From paragraph 1471 of the Catechism, which quotes the constitution Indulgentiarum Doctrina, we learn:

“An indulgence is a remission before God of the temporal punishment due to sins whose guilt has already been forgiven, which the faithful Christian who is duly disposed gains under certain prescribed conditions through the action of the Church which, as the minister of redemption, dispenses and applies with authority the treasury of the satisfactions of Christ and the Saints.” “An indulgence is partial or plenary according as it removes either part or all of the temporal punishment due to sin.” The faithful can gain indulgences for themselves or apply them to the dead.

Sin has a double consequence: 1) Eternal punishment and 2) Temporal or temporary punishment. All sin has to be remitted or paid for – that is a natural requirement of God’s Perfect Justice. The eternal consequence of sin is forgiven in the Sacrament of Reconciliation. “Temporal punishment” means that, even though all your sins are forgiven in Confession and the eternal punishment has been taken away, temporal consequences of the sin still remain. It is these temporal consequences of sin that send us to Purgatory before we can enter Heaven. And expiation (making amends or making reparation, atonement, or payment) or remission of the temporal punishment due to sin is the domain of indulgences (CCC 1472).

You cannot enter Heaven with any stain on your soul, so a soul that is on its way to Heaven after death, first spends time in Purgatory being cleansed. In fact, the very name of Purgatory itself comes from the Latin word purgare, meaning “to cleanse”. The Church teaches that every sin entails an unhealthy attachment to creation which must be purified either on earth or after death in Purgatory (CCC 1472). That “polishing” can happen here on earth through indulgences. And what’s more, through an indulgence, we can either help a soul that is already in Purgatory or help ourselves “take time off” Purgatory. (Read more about Purgatory in the Catechism #1030-1032.)

I said above that God’s Perfect Justice requires that the damage caused by sin be repaired. Another way to see this is that sin deserves punishment (although I prefer to think not of punishment but, rather, natural consequences). When we sin, our friendship with God is ruptured, and with mortal sin we lose access to God’s grace. So, in order to restore our friendship with God, not only do we have to be forgiven, but we must also repair the damage that the sin caused. That is what “remission of sin” means. The idea of indulgences is usually explained in this way: If I break my neighbour’s window, I can be forgiven for the action, but that doesn’t replace the window. I can either spend the money myself to replace the window, or someone can help me pay for it. No matter how, the window has to be replaced. The payment has to be satisfied. You see how having to pay for the window can be seen as a natural consequence of my actions. It can also be seen as punishment for my actions. When I pray for souls in Purgatory and when I try to gain indulgences for them, I am helping to pay their debt to God. It’s like helping someone else to pay for the window that they broke.

A good example of temporal punishment can be found in 2 Samuel. After he repents, God forgives David for his sin against Bathsheba and Uriah. However, the prophet Nathan tells him:

“The Lord has taken away your sin. You are not going to die. But because by doing this you have shown utter contempt for the Lord, the son born to you will die.” (2 Samuel 12:13-14)

David’s sin is forgiven, so he no longer has to suffer eternal punishment for his sin. But he still has to be “temporally” punished.

The Church has the Power to Bind and to Loose

The definition in Catechism 1471 says that all this happens through the action of the Church. It may seem as if it’s the Church that randomly decides what we need to do in order to gain the indulgence. It’s true that Christ's sacrifice on the Cross is enough for our redemption. But when we sin, as we've already seen, we must work to heal our friendship with God. To this the Catechism says:

An indulgence is obtained through the Church who, by virtue of the power of binding and loosing granted her by Christ Jesus, intervenes in favor of individual Christians and opens for them the treasury of the merits of Christ and the saints to obtain from the Father of mercies the remission of the temporal punishments due for their sins. Thus the Church does not want simply to come to the aid of these Christians, but also to spur them to works of devotion, penance, and charity. (CCC 1478)

Through indulgences, the Church applies her power as minister of the fruits of Christ's redemption. The Church, in granting indulgences, doesn’t just want to help us satisfy the temporal punishment, but also wants to help us perform works of piety, penance, and charity – especially those that can lead us to grow in faith. So, yes, it is the Church that has decided that there are some things that we need to do in order to gain the indulgence: We need to go to Confession and go to Mass. We need to say this prayer or participate in that devotion. The whole point is that we are doing things that will help us turn away from the things of this world and turn towards God. That is why we say that we “gain” or “obtain” indulgences: We do certain things, with a certain penitent attitude, so that our temporal punishment can be paid and to help us turn to God. But we are not really gaining them. God, through the Church, is granting the payment.

The Treasury of the Church

Again, the sacrifice of Christ on the Cross is enough for our redemption. We have all been redeemed. But it’s also as if the sufferings of Christ (through which we are redeemed) are all stored together as a treasury that can be used to satisfy our temporal punishment. In fact, all our sufferings and offerings, our prayers and good works, those of Mary and all the saints, also form part of that treasury (CCC 1477). The Catechism (again quoting Indulgentiarum Doctrina) says:

"[T]he 'treasury of the Church' is the infinite value, which can never be exhausted, which Christ's merits have before God. They were offered so that the whole of mankind could be set free from sin and attain communion with the Father. In Christ, the Redeemer himself, the satisfactions and merits of his Redemption exist and find their efficacy." (CCC 1476)

This is good to know because the Church also teaches that we are not able, by our own power, to remedy the harm caused by our own sin. We also know that our sin (no matter how small or personal it is) causes harm to the whole Church, the Body of Christ. So it makes sense that in order to make reparation, we rely on the whole Body of Christ (see above quote from Isaiah 53:11-12). The Church then, as the Christ-ordained minister of redemption (remember that Christ gave the Church the authority to "bind and loose" - see Matthew 18:17-18), has the authority to dispense and apply this treasury of satisfactions to us while we are still on earth.

In the early Church, severe public penance was demanded from a repentant sinner in order to pay for his temporal punishment. Later, the Church, using her authority to "bind and loose", began to reduce the penance for "good behaviour", which led to the formulation of indulgences. But then, the Church got in trouble with indulgences. People became a bit superstitious about the whole thing and began actually paying the Church in order to gain indulgences. You can’t pay for a blessing or pardon or anything from the Church. That is a sin called simony, named after Simon the Sorcerer, who in Acts 8:9-24 offers Peter and John payment in exchange for them empowering him to impart the Holy Spirit on anyone on whom he would place his hands. This is why the issue of indulgences ended up nailed to the church door with Luther’s 95 theses 500 years ago. Upon the conclusion of the Second Vatican Council, Pope Paul VI formed a Commission to study the topic thoroughly. On January 1, 1967, an Apostolic Constitution, Indulgentiarum Doctrina, was promulgated, which constitutes the Church’s doctrine on indulgences for our time.

An indulgence is sort of like a favour that Christ gives us through the Church. It does not forgive the sin but takes care of the payment of temporal punishment required by past sins that have already been forgiven. Payment for the punishment comes out of the treasury of satisfactions earned by Christ and the Communion of Saints. The Church has the authority to dispense and apply this treasury to souls while still on earth. Lastly, if we didn’t have indulgences, we would have to satisfy our own temporal punishment through personal penance here on earth or later in Purgatory. Indulgences might seem hard to understand, but they're an important part of our Catholic tradition. They help us to be better as we make reparation for our sin and also remind us that we are all connected in the Body of Christ. They also mean that not only are we helping ourselves in this life, but we can also benefit those souls who are in Purgatory and on their way to Heaven.