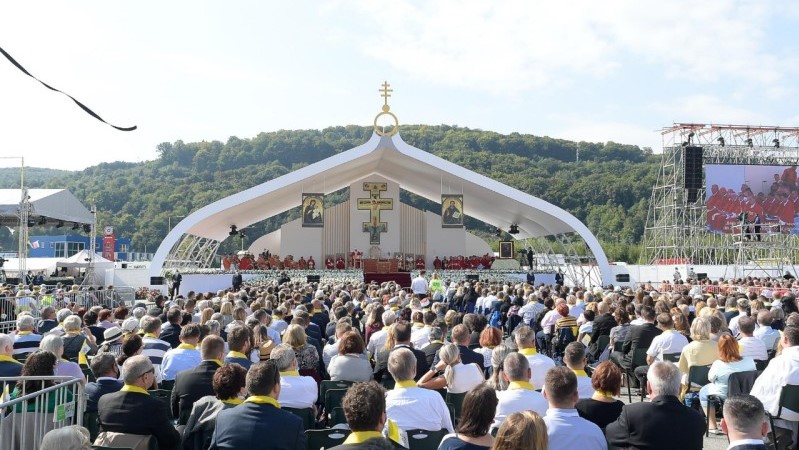 On September 14, 2021, the feast of the Exaltation of the Cross, Pope Francis presided over the Byzantine Divine Liturgy of St. John Chrysostom, accompanied by the Metropolitan Archbishop of Prešov, Ján Babjak, and other Greek and Latin Catholic prelates. The liturgy took place in Prešov, a city located in the eastern part of Slovakia and that country's third largest city. It is also the seat of the Slovak Greek Catholic Church, which follows the Byzantine Rite and is in full communion with the Holy See. About 3.8% of Slovakia's population belong to this church. Read the Holy Father's homily below:

“We proclaim Christ crucified… the power of God and the wisdom of God.” So Saint Paul tells us, but he does not hide the fact that, in terms of human wisdom, the cross appears as something completely different: it is “scandal”, “foolishness” (1 Cor 1:23-24). The cross was an instrument of death, yet it became the source of life. It was a horrendous sight, yet it revealed to us the beauty of God’s love. That is why, in today’s feast, the people of God venerate the cross and the Liturgy celebrates it. The Gospel of John takes us by the hand and helps us to enter into this mystery. The evangelist himself was present, standing at the foot of the cross. Gazing upon Jesus, hanging lifeless there, he writes: “He who saw this has testified” to it (Jn 19:35). Saint John both sees and testifies. First comes seeing. What did John see as he stood beneath the cross? Surely, what others saw: Jesus, an innocent and good man, brutally put to death between two criminals. Yet another of the many injustices, the many bloody sacrifices that do not change history, the latest proof that the course of events in our world does not change: the good are cast aside and the wicked prevail and prosper. In the eyes of the world, the cross represents failure. We too can risk not going beyond this first, superficial gaze; we too can fail to accept the message of the cross, that God saves us by allowing all the evil of our world to be unleashed upon himself. We can fail to accept, except perhaps in words, a weak and crucified God, and prefer instead to dream of a God who is powerful and triumphant. This is a great temptation. How often do we long for a Christianity of winners, a triumphalist Christianity that is important and influential, that receives glory and honour? Yet a Christianity without a cross is a worldly Christianity, and shows itself to be sterile. 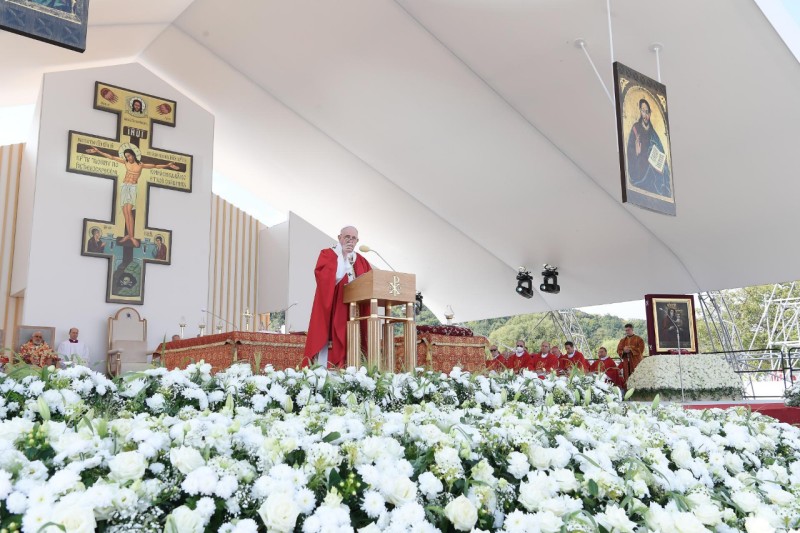 On September 14, 2021, Pope Francis presided over the Byzantine Divine Liturgy of Saint John Chrysostom in Prešov, Slovakia. Photo courtesy of Vatican Media.
Saint John, on the other hand, saw in the cross the presence and work of God. In the crucified Christ, he recognized the glory of God. He saw that despite appearances, Jesus is not a loser, but God, who willingly offers himself for every man and woman. Why did he do this? He could have saved his life, he could have kept his distance from the misery and brutality of human history. Instead he chose to enter into that history, to immerse himself in it. That is why he chose the most difficult way possible: the cross. So that no one on earth should ever be so desperate as not to be able to find him, even there, in the midst of anguish, darkness, abandonment, the scandal of his or her own misery and mistakes. There, to the very place we think God cannot be present, there he came. To save those who despair, he himself chose to taste despair; taking upon himself our most bitter anguish, he cried out from the cross: “My God, my God, why have you forsaken me?” (Mt 27:46; Ps 22:1). A cry that saves. It saves because God took upon himself even the experience of our abandonment. And now, with him, we are no longer alone, ever. How do we learn to see glory in the cross? Some of the saints teach us that the cross is like a book: in order to know it, we have to open it and read it. It is not enough to buy a book, take a look at it and put it on a shelf in our home. The same is true for the cross: it is painted or carved everywhere in our churches. Crucifixes are found all around us: on necks, in homes, in cars, in pockets. What good is this, unless we stop to look at the crucified Jesus and open our hearts to him, unless we let ourselves be struck by the wounds he bears for our sake, unless our hearts swell with emotion and we weep before the God wounded for love of us. Unless we do that, the cross remains an unread book whose title and author we know, without its having any impact on our lives. Let us not reduce the cross to an object of devotion, much less to a political symbol, to a sign of religious and social status. 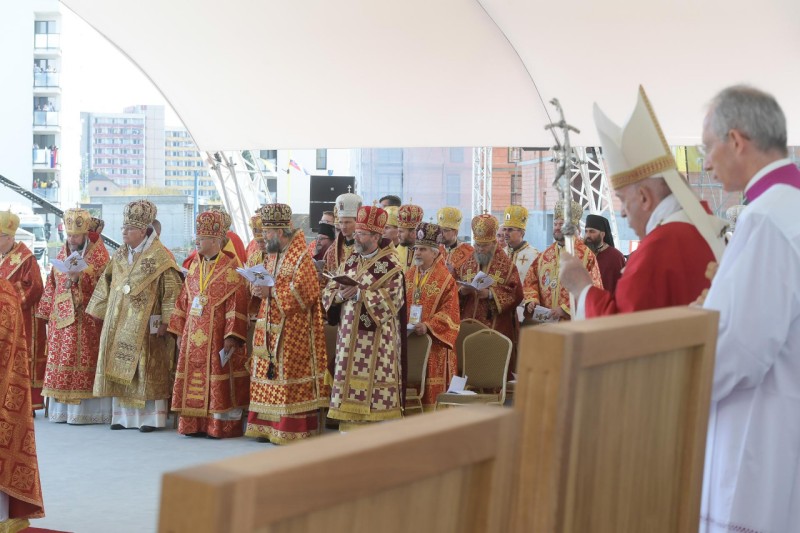 On September 14, 2021, Pope Francis presided over the Byzantine Divine Liturgy of Saint John Chrysostom in Prešov, Slovakia. Photo courtesy of Vatican Media.
Contemplating the crucified Lord brings us to a second step: bearing witness. If we fix our gaze on Jesus, his face comes to be reflected on our own: his features become ours, the love of Christ wins us over and transforms us. Here I think of the martyrs who in this nation bore witness to the love of Christ in troubled times, when everything counselled silence, taking cover, not professing the faith. Yet they could not – could not – help but testify. How many generous persons suffered and died here in Slovakia for the name of Christ! Theirs was a witness borne out of love of him whom they had long contemplated. To the point that they resembled him even in their death. I think too of our own time, in which there is no lack of opportunities for bearing witness. Here, thank God, we do not find those who persecute Christians, as in too many other parts of the world. Yet our witness can be weakened by worldliness and mediocrity. The cross demands instead a limpid testimony. For the cross is not a flag to wave, but the pure source of a new way of living. Which? That of the Gospel, that of the Beatitudes. A witness who bears the cross in his or her heart, and not only on his or her neck, views no one as an enemy, but everyone as a brother or sister for whom Jesus gave his life. A witness of the cross does not dwell on the wrongs of the past or keep lamenting the present. Witnesses of the cross do not employ the ways of deception and worldly pretension: they do not want to impose themselves and their own, but to give their lives for others. They seek not their own advantage, in order to be seen as devout: this would be a religion of hypocrisy, not a witness to the crucified Lord. Witnesses of the cross have but one strategy, that of the Master: humble love. They do not look for triumphs here below, because they know that the love of Christ bears fruit in the events of daily life, renewing all things from within, like the seed that falls to the ground, dies and produces much fruit. 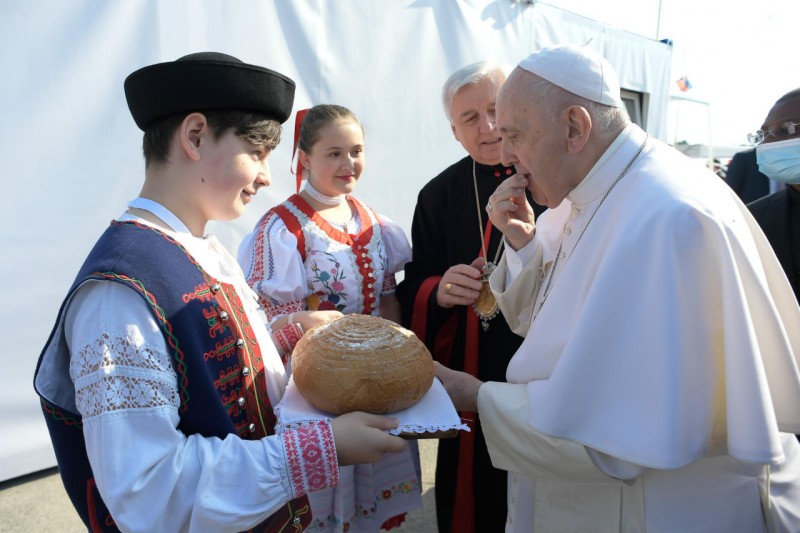 Pope Francis is greeted in Prešov by two children in traditional Slovak dress who bring him the traditional gifts of bread and salt. Photo courtesy of Vatican Media.
Dear brothers and sisters, you have seen such witnesses. Cherish the memory of those persons who nurtured you and helped you to grow in the faith. Lowly and simple persons who gave their lives in love to the end. These are our heroes, the heroes of everyday existence, and their lives changed history. Witnesses generate other witnesses, because they are givers of life.  That is how the faith is spread: not with the worldly power but with the wisdom of the cross; not with structures but with witness. Today the Lord, from the eloquent silence of the cross, is asking all of us, as he is asking you, and you, and you, and me: Do you want to be my witness? Standing with John at Calvary was the Holy Mother of God. No one saw the book of the cross so wide open as she did, and she testified to it with humble love. Through her intercession, let us ask for the grace to turn the eyes of our heart to the crucified Jesus. Then our faith will be able to flower in its fullness; then our witness will bear its full fruit. Text courtesy of Libreria Editrice Vaticana (click here for original source)